Today was the start of following the Saint Lawrence on the south side, just a short distance from the US border with Maine. It’s funny to think that if it wasn’t for Maine sticking up to the north the way it does, those of us cycling across Canada would probably go straight from Montreal to Prince Edward Island, missing Quebec and most of the Saint Lawrence along the way. Also missing out quite a few miles of cycling north-east before dropping back down. The only problem would be a ridiculous number of hills in your way.

A pretty extreme highest temp today as you can see. The measurement is a bit like the court-side reading at Wimbledon; it’s way hotter than the air temperature because it’s recording in direct sunshine. Today felt every bit like 40+ out on the road, and I got through gallons of water. 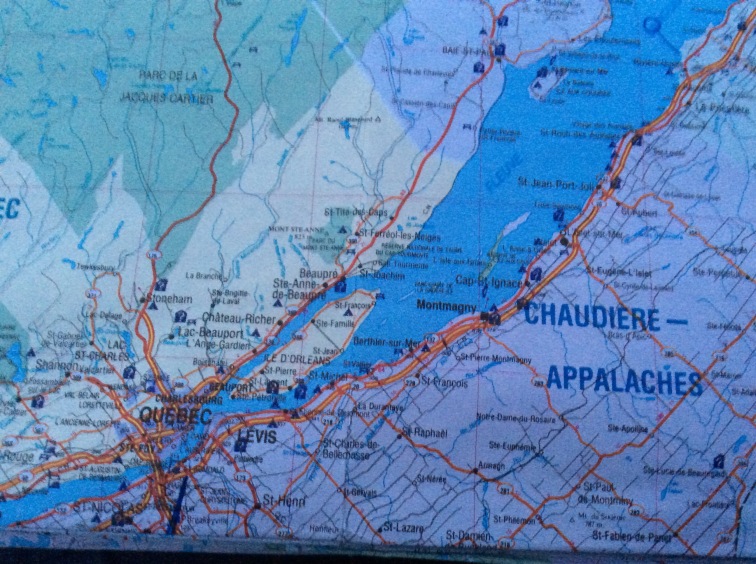 I found I was no longer alone in my Pavillion this morning. One of the other rooms had been taken by Roy, on his way home to near Halifax with his new Subaru car, picked up in Montreal. It was what he called a ‘standard’, or what the British would call a manual, and was so rare that he was willing to fly all that way just to get hold of one. Some dealers, he told me, had literally never seen manual shift. We had breakfast together over my big map for route planning: 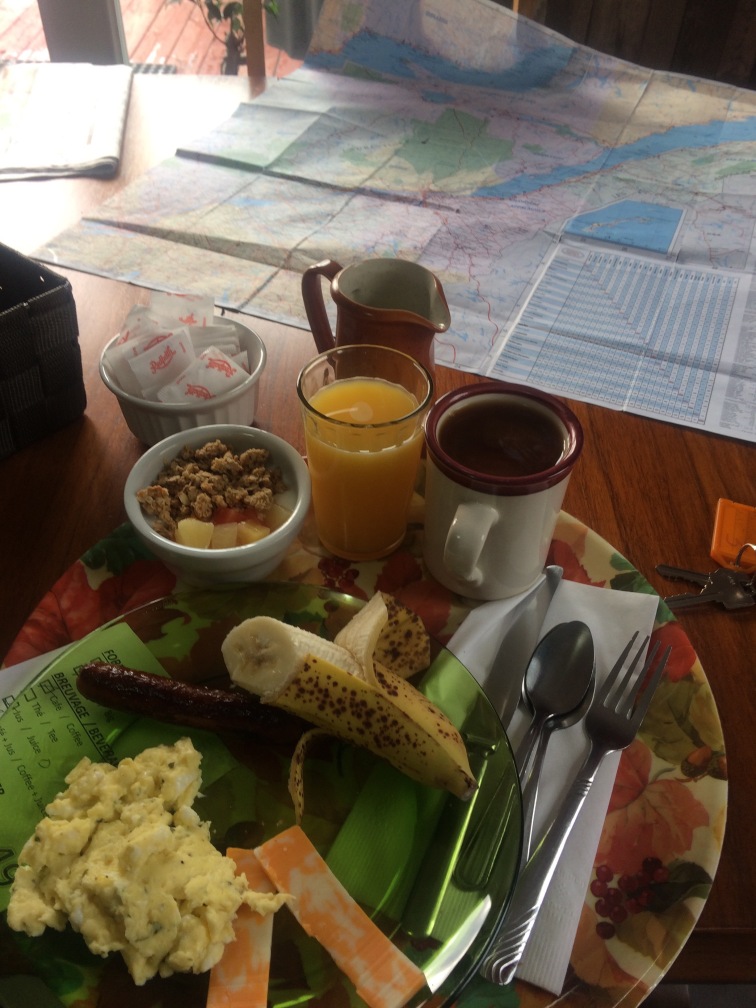 Roy is originally from Nova Scotia, but his parents are form Newfoundland and he spent every childhood holiday there, driving huge miles in the family stationwagon, from Halifax to the ferry, 6 hours on board, then right across Newfoundland on the only road to a tiny port on the south east coast, tucked well away from everything. I asked him if he knew the E Annie Proux book The Shipping News, and he said he hadn’t actually read it but worked as a driver for the film crew when they made the movie version. He very kindly made a donation to SOS Children’s Villages before he left – many thanks again Roy! 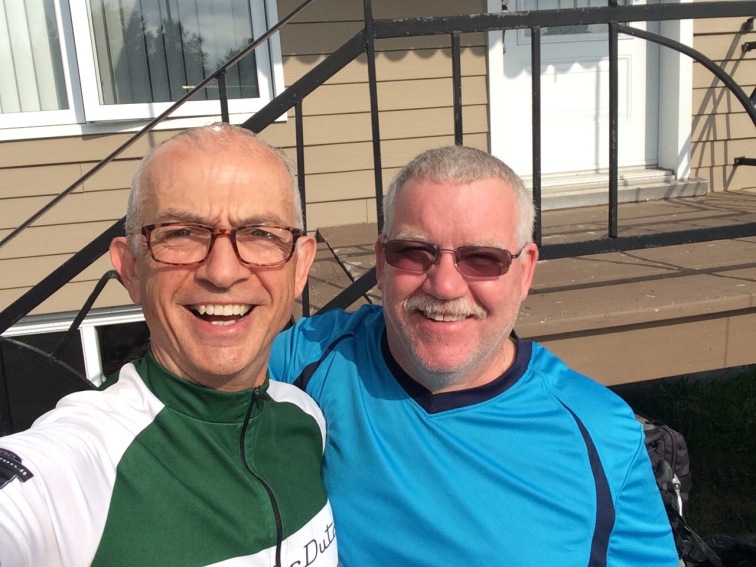 Roy reminded me of the Welshman Windsor Davies from ‘It Ain’t Half hot Mum’ – “Sing Lofty, sing!”

Just before I left there was one last earth-shatteringly loud claxon from a train by the hostel. I forgot to mention these trains – it’s so astoundingly loud that it just makes you laugh. These claxons are designed to be heard across wide prairies and mighty mountains. This one might as well have been in the shower with me this morning!

(I’ve been to two out four of these towns, three by the end of the trip)
I loved cycling all along the river this morning, on the Route Verte. It offered spectacular views back across the water to the old city, where I was yesterday, and had lots of other things to see. It wasn’t at all hilly as I’d feared as it followed an old railway line right beside the river whilst the road above dived and climbed up above on the escarpment to my right.

That’s old Quebec behind me, where I was yesterday. I haven’t got used to the river now being on my left. I’ve had many mighty bodies of water on my right for so many thousands of miles that it just dosn’t feel right yet.
I passed a beautiful old boat, the “Jeffy Jan II”, from a town I passed a week or two ago, on display in a boiling hot tent: 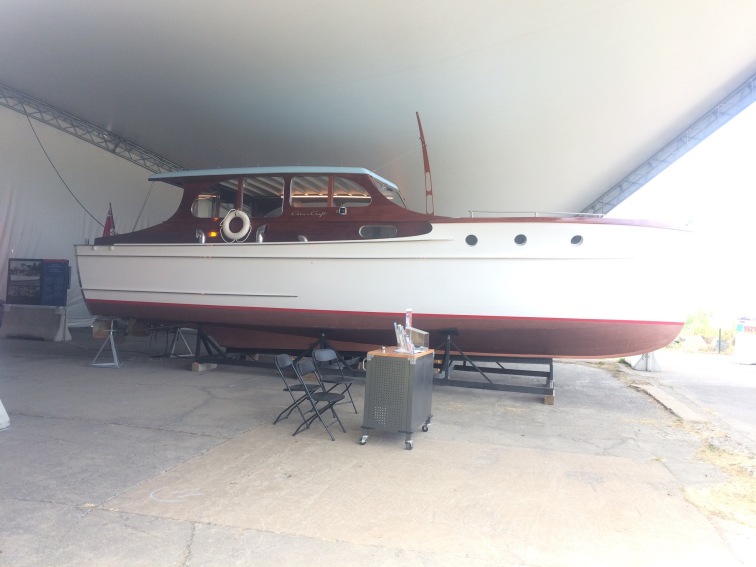 There was a local history photographic exhibit too, where I saw this great photo of the Jeffy Jan. Also this (concentrate now, quiz coming):

So, can  you name the movie with these two actors, filmed here, and the famous director? Clue – one is a namesake from yesterday’s Québécois history module.

The road between Montmagny (which is non descript) and Rivière-Ouelle, where I am tonight, is just superb. Endless beautiful houses, churches, local shops, fields, river views, and great cycling, if only it wasn’t so hot. 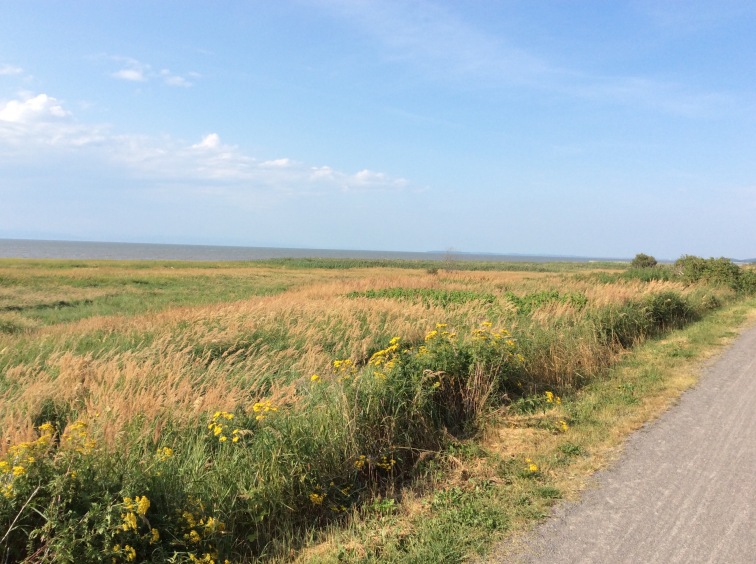 At a Maritime museum (can’t remember where) I met Jim and Jeanette from north of Edmonton, Alberta. They had flown in to Quebec to enjoy a cycling holiday along the route I was riding to today. They also told me about a bike shop around the corner where I checked my tyre pressure (which had bothering me) and bought some more oil. In the hot weather the chain gets baked and squeaky very easily, especially if there’s gravel around. 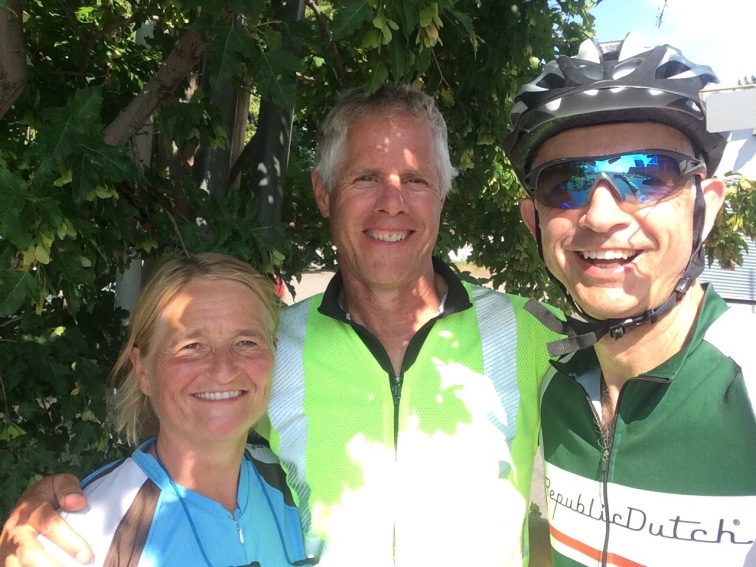 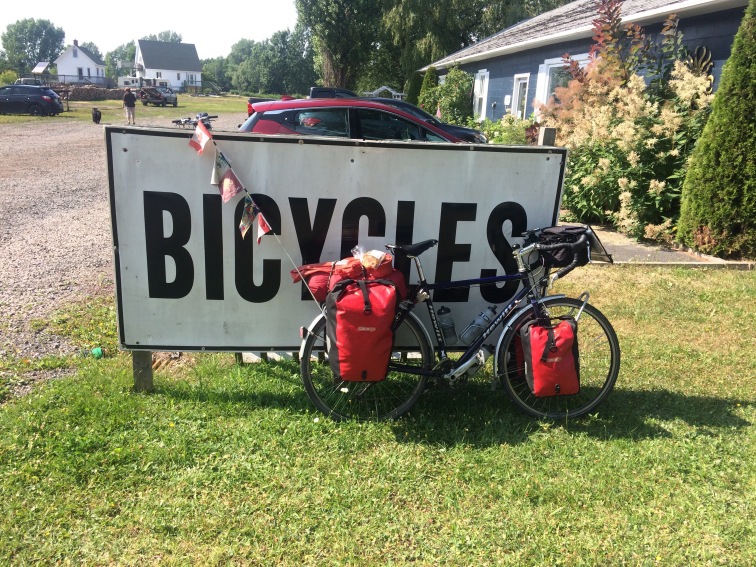 I passed a beautiful promontory of rock towards the end my day, and took the time to ride out across the grass to have a look: 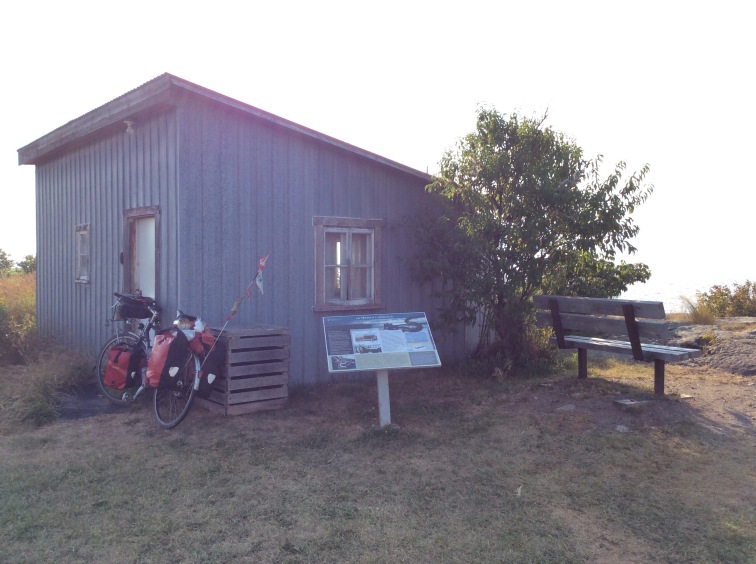 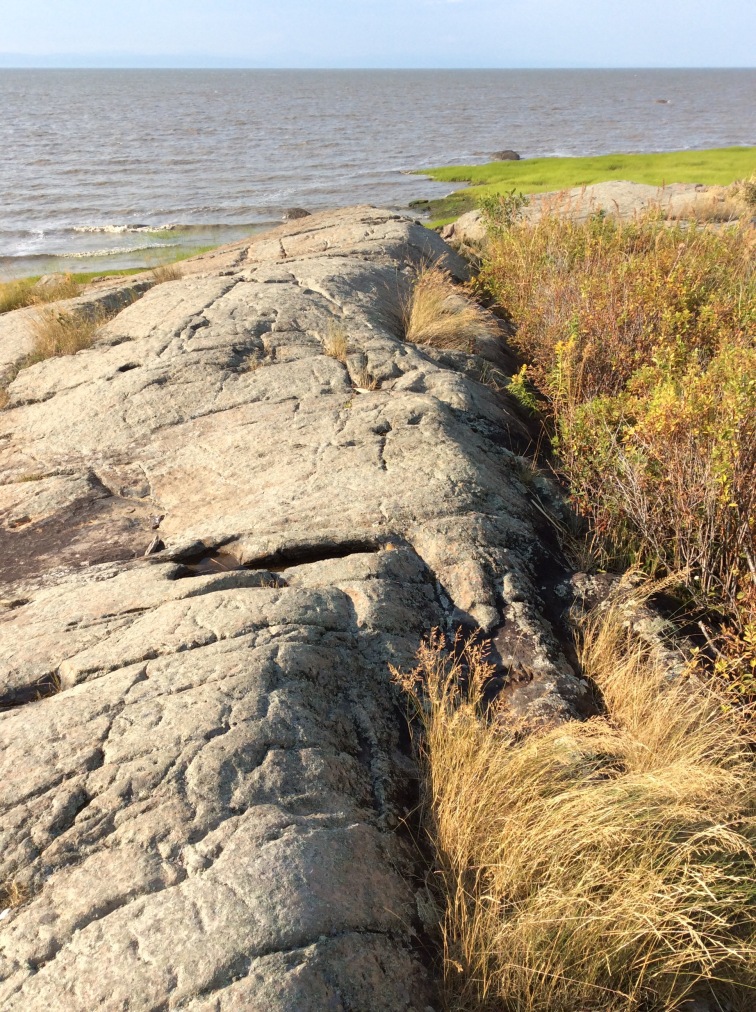 I nearly wrote something here the other day about how dependent I am on my evening shower to restore myself after the exertions of cycling every day, and how badly I think I’d cope in the real wilds. Tonight I put the theory to the test. Arriving exhausted and covered head to toe in road grit from the final 20km stretch of gravel (see above), and after finding that th campground was a fair bit further than it looked on the map, I patiently listened whilst the girl at the desk went through all the endless local instructions, which I have to do every time I camp, none of which I have any use for or interest in, got my tent up and hit the showers. First I found I’d left my shampoo back at the hostel, so had to grab handfuls from the dispenser, to the confusion of a chap there, then after putting in my four quarters (I do hate the system of paying for showers with fiddly machines), the shower wouldn’t work. I just lost it. I thumped the metal box, shouted like Victor Meldrew “You cannot be serious!” Then thumped it again, only harder, and shouted some more at the stupid box.. Finally I gave up and came out of the cubicle to find the chap still there looking worried and a bit concerned. I said I was sorry, it had been a long hot day cycling all the way from Quebec (“Mais, you can’t be serious? he said)“, and I promptly started showering myself like a total lunatic in the sink. I was determined to get myself hosed down. I said sorry again, and he said “I am sorry for you”, which made me feel terrible. He disappeared, with me promising that I’d be much better in the morning, but returned a few moments later with a bottle of shampoo. I was all done by then, but I told him he was a good man and to take no notice and that I felt better already. He smiled and said “You must be tired, eh?” People can be amazing sometimes, when he had every right to be annoyed at me for going bonkers.

I cooked some delicious peaches-and-cream sweetcorn I’d bought by the road (2 for $1.50, plus a lovely big tomato which I just ate there by the road), then the entree was a tin of ravioli. And I said fine dining and this trip didn’t mix – ha! Time for bed, eh? Dessert was a bar of chocolate.
﻿ 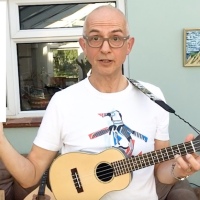 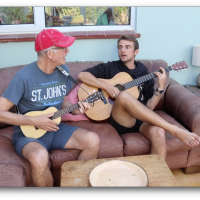 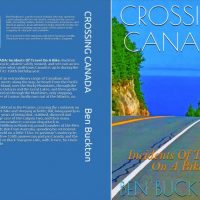