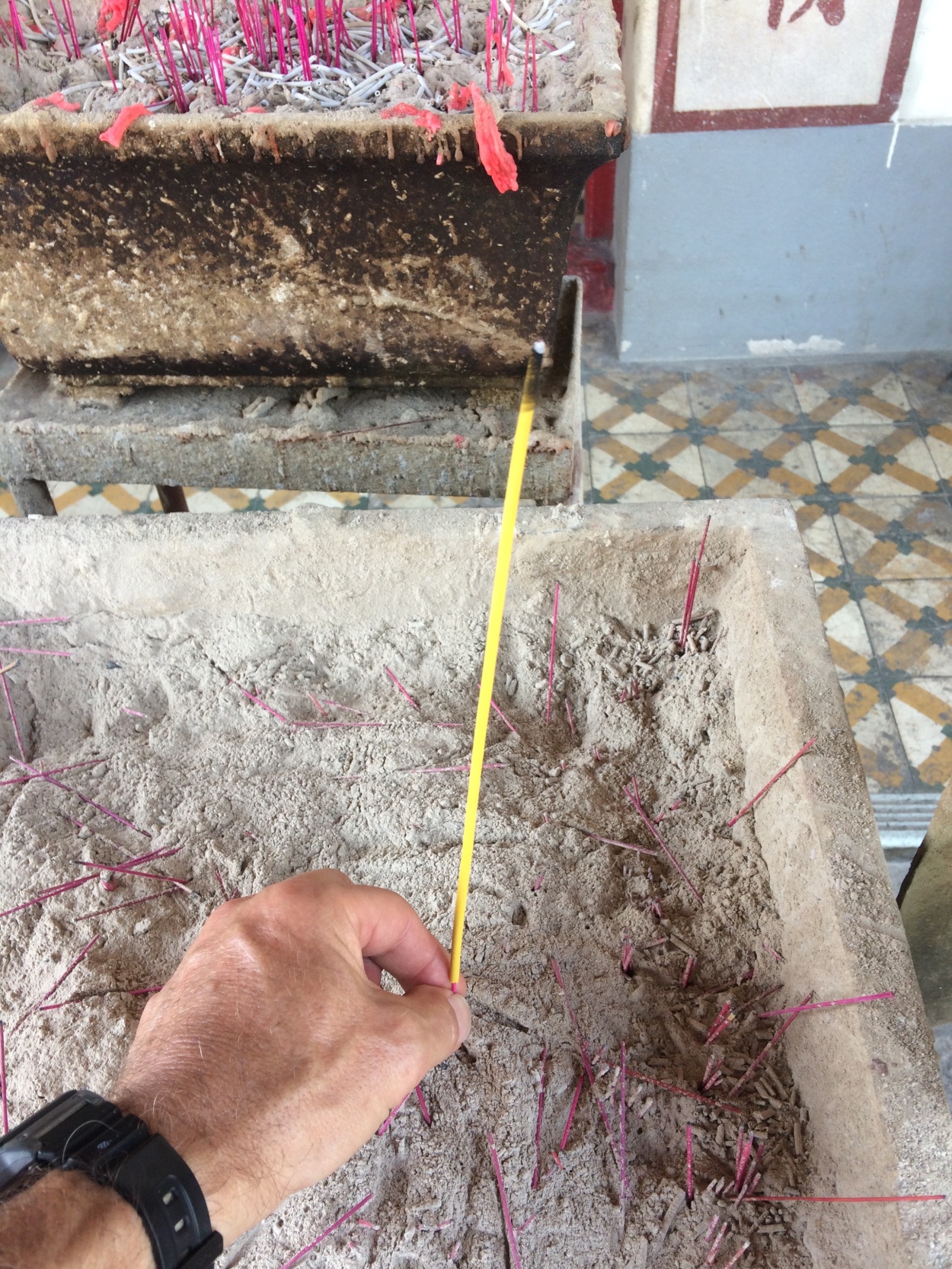 It’s all been going so well, with only the occasional obstacle to overcome. Until today that is, when my luck seemed to desert me.

The only misgivings I had were over issues I hinted at yesterday: I went to sleep wondering whether I should take a day off today, as a precaution against any reaction to the exertion in the relentless heat. I decided to do what I always did in Canada – see how I felt in the morning, and take it from there. And I felt great, so after waving Susie off to work I packed up and commuted over to Central Piers No.4. There was no respite from the heat, with another hazy start but no clouds in the sky. I got my ticket to Young Shue Wan to explore the North part of Lamma Island, where we were yesterday (I hope you’re all keeping up with this).

I got a coffee then stopped again at my new favourite snack bar to try the Fish Dumplings, which were excellent. I realised that I’m getting a second breakfast every day, just as if I was on a big touring expedition, which made me laugh. 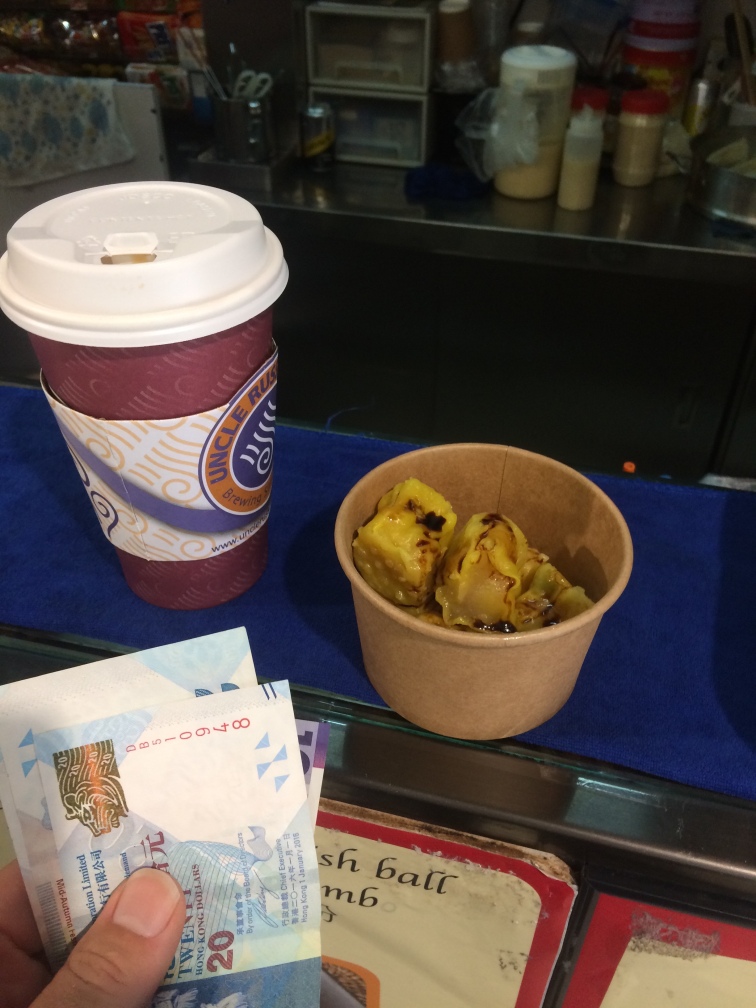 The ferry took around half an hour, and it was after we disembarked that things went wrong, for me at least. I set off throuugh the small seaside village checking out possible eating places for lunch and soaking up the atmosphere as locals shopped at small market stalls 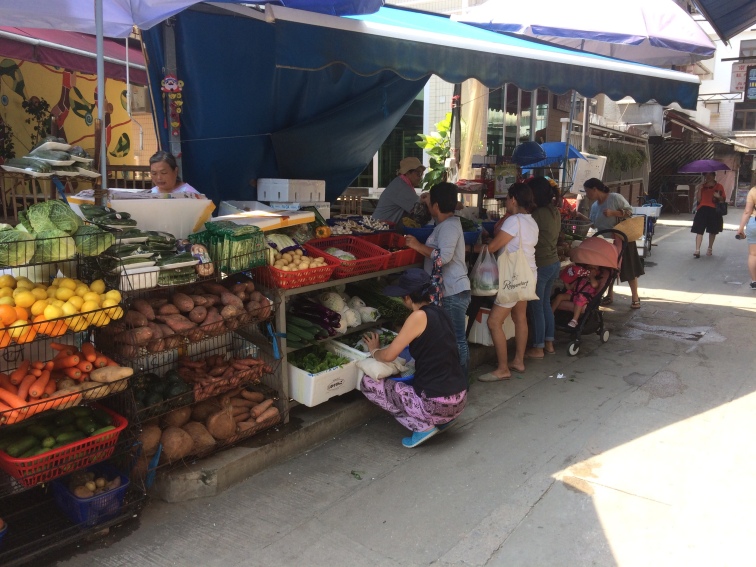 At the end of the village, I found a temple to the sea-goddess Tin Hau, much like in Sok Kwo Wan yesterday. I’m relying on the sea to treat me well on this trip, so I made an offering in the collection box and put my wallet back in my pocket without zipping it up as I normally do. Can you perhaps sense where this cliffhanger is leading? 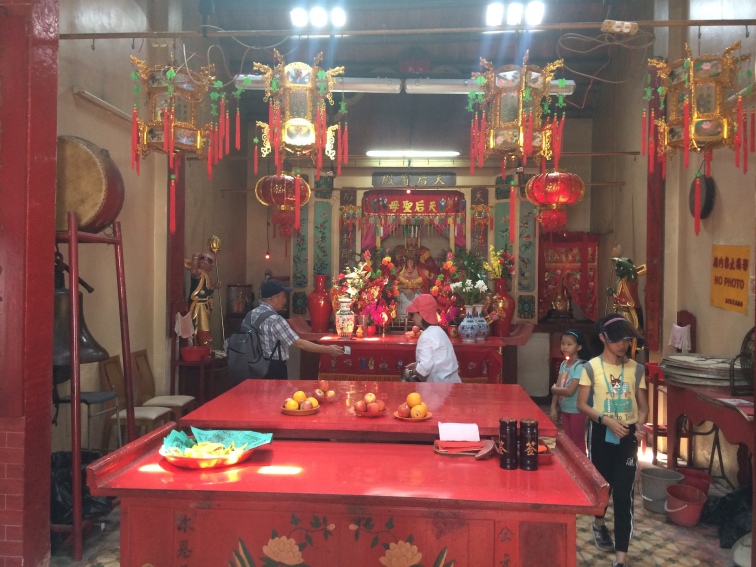 I chatted with the lovely family you see in the picture. The two girls had smiled very brightly at me and said “Hi!”, and their dad told me he’d just retired and was celebrating with a family trip to the island. “Are you retired too?”, he asked. “Er, no, not yet”, I replied. “Oh!”, he said. “How old are you?” His wife kept laughing merrily at things he said, and I wondered if I’d stumbled on a natural straight-faced comedian, or perhaps I was just looking old. I lit a joss stick outside and stuck it in the ash of a thousand joss sticks from the past, as I’ve seen many others do:

Then I rode off slowly back through the village and on to the ‘Family Walk’ path that I was to take. I stopped a few times to let the narrow trucks go by, which look almost like toys but carry serious cargo loads for building sites, shops, all sorts. At one of these moments I did a kind of instinctive reach to check my pocket, and straight away thought “Oh @@$%!” I retraced my steps, even searching the temple and asking the street cleaners, but no luck. After two more slow searches, in full sun with my computer showing 43°, I was dripping with sweat and facing facts. In the most unlikely spot next to the temple I noticed the sign for an A&E clinic, so asked them directions to the police station. Remember, this is not that large an island, so I wasn’t even sure that there was one. With much waving and explaining from three nurses who came out on the street all wearing full scrubs and face masks, I found my way there. I do regret that there are no photos of this whole thing, but I’m hoping you’ll all understand why, in the circumstances.

The Police Station was a haven of a/c and calm. I had the very good fortune to be looked after by Officer 2156 (he modestly said there was no need to thank him by name, but I was welcome to use his number, stitched neatly into his epaulette). As he filled in the usual Incident Form, I cancelled and froze cards online or by phone, and tried to recall how much cash I had loaded up with – unfortunately I’d been quite generous to myself today after running short yesterday. I mentioned to the officer that I’d made a contribution to the temple hoping for luck, but that it seemed to be having the opposite effect. He nodded and smiled thoughtfully without speaking, an expression that came back to me again towards the end of my day.

My remaining problem was this: I was stuck on an island in the South China Sea with HK$3 in change, a photocopy of my passport, a bike and pannier, some water and a packet of Haribos. I asked Officer 2156 if he had any idea whether the ferry company would let me travel on a promise and my hotel address? He smiled at me, looked at his buddy, opened his wallet and took out HK$40 in notes, which was enough to get me back to Central at least. I tried to refuse it, but he was insistent, and said it “It is not a problem. Just come one day soon and pay it back”, waving his hand behind me. I thanked him as warmly as I could muster and left. It was only later that I wondered whether he was waving towards the police station, the island in general, or the temple.

I now had the means of getting part-way back, but there wasn’t a boat for a while so I decided to continue with my original plan for at least a bit. My heart really wasn’t in it at first, especially since I now had no money for lunch. I’d managed to cover 5,000 miles over three months without losing anything more than raincoat, but now I was cleared out on Ferry Day 4. I cycled quite hard along the paths, probably in frustration, but passed so many smiling and friendly people that I tried to calm down and put it behind me. The path lead me to the beautiful Hung Shing Yeh Beach. 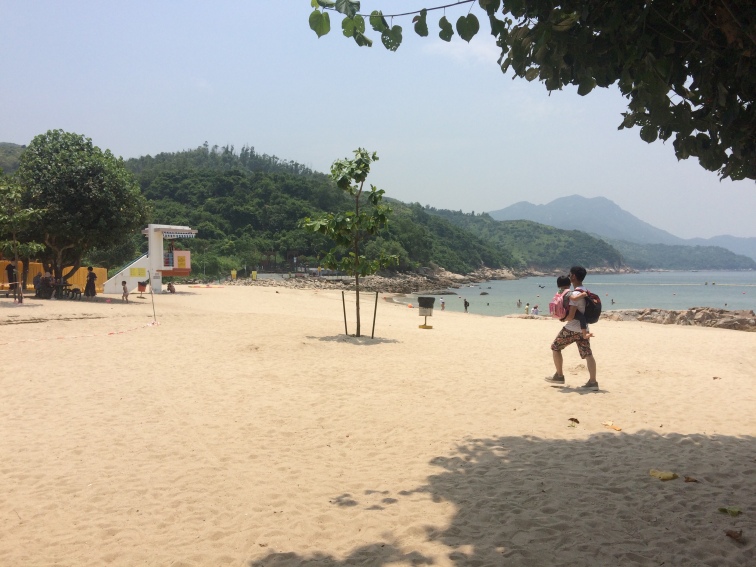 It was midday now, so I pushed on having promised myself a swim on the way back. I wanted to join up with the route from yesterday where I stopped at a Pavillion Lookout. I stopped there once more and listened to a large group of English-speaking boys of many nationalities, who were accompanied by two Chinese counsellors/guardians, moaning about how tough the walk was and wishing their mums hadn’t signed them up for this week of activities. “Why are we even doing this? It’s crazy! I’m so hot!”, and so on. The counsellors were a picture of patient resolve, telling them to buck up, stop moaning, and help the younger ones. “15 minutes!”, announced one of the adults. “Whaaaat? To eat?”, said a boy. “Yes, it’s plenty”, said the man, to yet more moans mixed with laughs from the boys.”Man, I cant wait til the beach”, one of the boys shouted, and I realised that we would end up there at about the same time.

Sure enough, after I parked my bike in the shade and dashed across the roasting sand for a delicious swim, I ran into them all again, this time at the free showers. They were still at it. All of them were taking cool showers, fully dressed and with shoes on, laughing and shouting about how hot they were and asking to be left at the showers forever. I showered next door, as usual wearing my cycling gear, but a lad stopped outside and said “This is awful!!” I said “No it isn’t, you’re having a great time!” He looked stunned, and said, “But we’re walking miles and it’s so hot!” The other lads were leaning in to see this stranger and listening now, so I said, “Yes, but you are having a good time, I can hear it in your voices when you’re all shouting and sharing everything with everybody and complaining. You’re all together and you’ll remember this day forever!”. Like me, I thought. The counsellors suddenly appeared in my shower too, and were laughing their heads off. “True!”, they said. “You see – he thinks so too. You are having a good time. Now let’s go!!” They thanked me with real feeling and asked me to wish them luck with the boys as they tried to stop them swimming in the sea – “Too difficult, too sunny, not enough time!”, they explained. I did as they asked, then hopped on my bike dripping wet once again, and cycled happily back to the pier.

After one more fruitless search and a trip back to ask 2156 if he had any news (he didn’t of course). I said “Do you think I have a good chance, little chance or no chance?”. He smiled patiently, and said “I think fifty-fifty. Maybe you’ll get lucky”. I used my gifted notes to buy a ticket for myself and my bike and sailed back to Central.

I still had a problem. After cyclng back along to Wan Chai as usual, I looked for one of the crew that I might recognise, to ask if he’d help me out by waving the bike fee to Kowloon just for today, as I only had enough for a footpassenger. But no luck. The only person on duty was a new face to me, and he spoke almost no English. In the end the only thing he really understood was me holding out my hand, which held a motley collection of small coins, adding up to about Hk$9, at least $10 short. He gave a heavy sigh, and with suprising gentleness lifted the coins one by one from my hand, even though his mates were shouting at him to get back to grabbing ropes and so on. When my hand was cleared, I thanked him and tried to shake his hand. He waved the hand that held the money in the air instead, saying “Okay! Okay!”

I leant on the railings of the downstairs deck, watching the other boats in the harbour and half-listening to the good-humoured conversations of the crew, despite not understanding a word. It was then that the expression on the face of Officer 2156 came back to my mind, and it struck me that I had been very quick to say that I had only had bad luck after ‘paying’ for good luck. Was that really true? I’d been the grateful recipient of nothing but generosity, good humour, helpfulness and patience all day, and the loss of my wallet, whether by accident or design, was really just my own stupid fault, and nothing to do with luck.

Here’s a Sign That Made Me Laugh today, on a day which was a little short on laughs in general. This one is a list of freight charges for the ferry today, and is worth a close look. You’ve got to love Hong Kong. 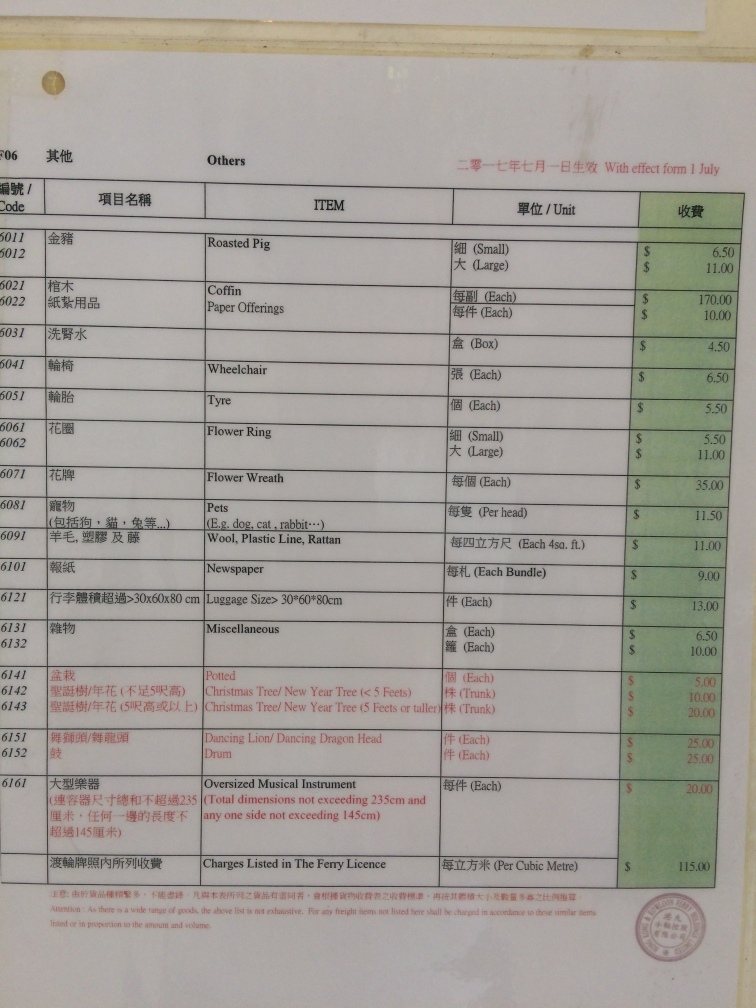 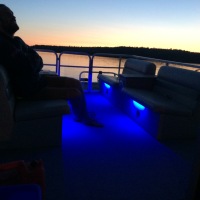 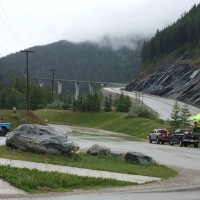