Day 29 – Winnipeg to Black Sturgeon Lake. Today started as the first day of my second month on the road in Canada, and ended as one of the most eventful days so far. The blog will be slightly longer today!

Heading out of Winnipeg this morning I’d been warned by the Calgary (now) Two to expect a lot of construction work on Highway 1 East (they traveled this way a couple of days ago) with hard shoulders unusable. As it turned out they had been busy on the roads since, and I flew along mint condition asphalt for many miles with another lane shut for good measure. 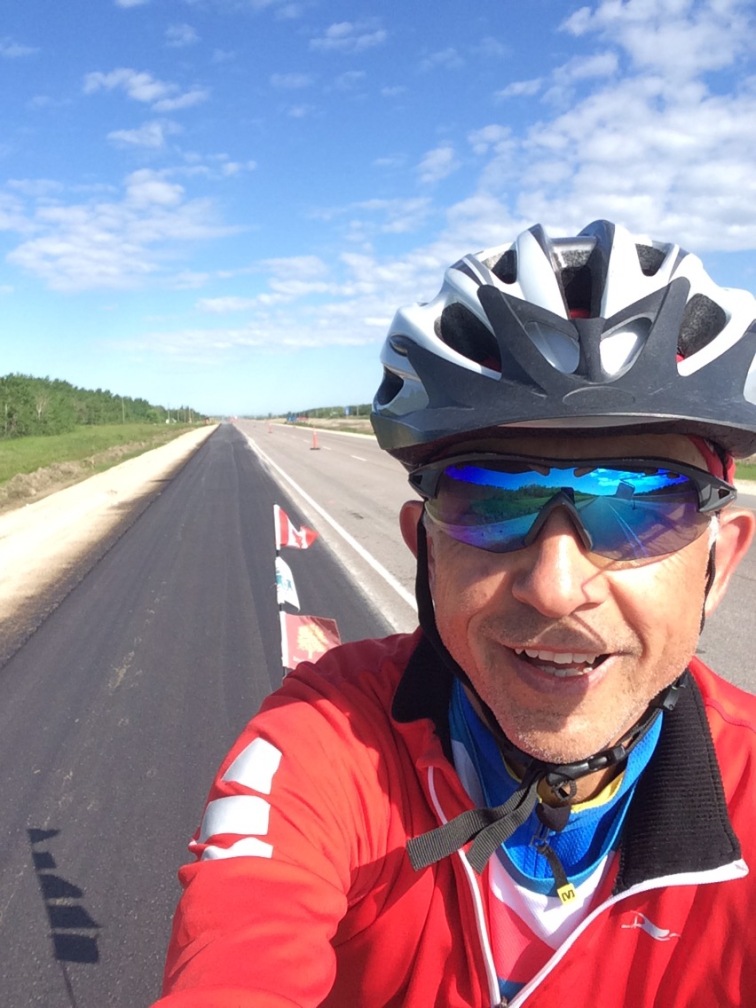 A few miles further on I heard a bike bell behind me and met Trevor, the first cyclist I’ve linked up with actually on the road since starting my trip. He was heading for his uncle’s house beyond Kenora and within a few minutes he’d invited me along if I wanted to crash there. He was formerly a criminal lawyer in Winnipeg who had ditched it in favour of retraining to move into medicine, so was in the middle of science studies. We had a great time chatting about all of that and enjythe unusually peaceful trans-Canada ride. I had just stopped for a bacon sandwich and coffee before we met but after a while we pulled up at gas station for lunch for Trevor and more coffee and a cinnamon bun for us both. As if to order, the place had great wooden booths, and I suddenly realised that he had a lime green shirt! I welcomed Trevor to the blog with honorary status.

we got back on the road. Kenora was the furthest I’d planned to go today but the fine weather and Trevor’s local knowledge made me accept his offer and join him for the extra miles.

We made great speed, eventually getting to the Manitoba/Ontario border and crossing into my fifth Canadian province. 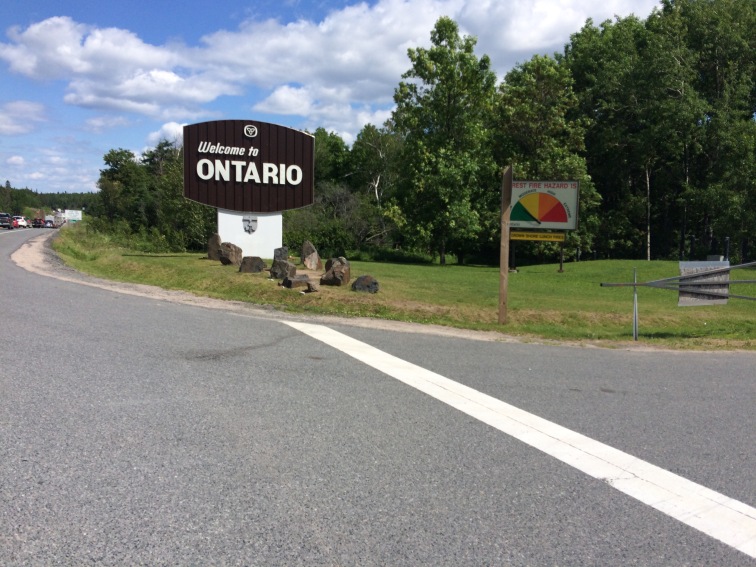 We’d been following a huge line of stopped traffic, ringing our bells for motorists taking a walkabout, and finally reaching the scene of an accident. This, combined with the construction, had created a summer car nightmare of a day, where for once the bike was king. Even motorbikes weren’t able to jump the stuck cars.

As we passed the scene we started getting questions shouted about the snarl-up. For about 15km we just kept saying “About 2km to go!” to keep it simple! It was so striking that after being so much in minority on the bike we suddenly had everyone’s full attention as we sailed along. At around 110 miles into the ride I stopped to buy water, where a kind lady drinking coffee offered to buy it for me, seeing my charity shirt. The owner piped up “Hell, he can have it on the house!”

As predicted by Jerry and Mayta (Susie’s uncle and aunt) on the phone yesterday, the countryside became incredibly beautiful as we progressed into Ontario, lakes and trees and gigantic cuttings through rock for the curvaceous highway. We arrived at Trevor’s uncle Wayne’s stunning house by the lake in late afternoon, tired and thirsty, and were made very welcome with cold beers on the deck.

After a shower and a change of clothing, Wayne suggested showing us the lake in his pontoon boat, and we gladly accepted.

Lying peacefully on the bench you will see that I brought my uke along at Wayne’s request, a decision that turned out to be more important than you might imagine. 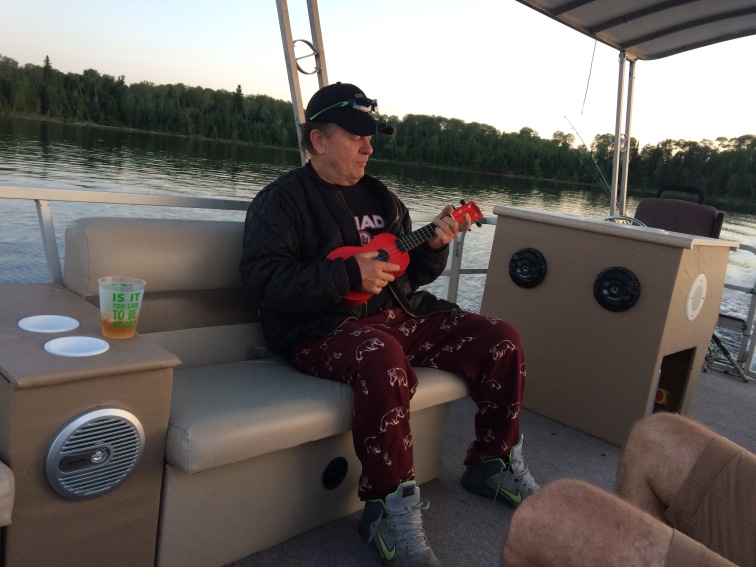 The lake is pretty spectacular, not too huge but so varied, with islands, loons, impressive properties, and, wait for it, many reefs. The sun went down and we were making our way slowly back to the dock:

…when suddenly there was an almighty lurch and the boat felt like a car hitting a speed hump. The engine cut out, never to restart, and we found ourselves in a bit of a pickle. Scouring the boat it transpired that there were no paddles, and despite calling every number imaginable we couldn’t find anyone who could come out and give us a tow, it being late at night but early in the season. The local golf club on the lake, who at least answered the phone, just laughed and refused to help. Wayne has vowed to have words with his buddy, the owner, when he’s back at the club. Time stretched, the sun set and the options shrank. Wayne tried everything to restart the motor and used bait boxes to paddle, a spare battery was tied to a rope and used to try and anchor- drag us toward shore but nothing really worked. At this point I looked long and hard at my uke and thought “You’re starting to look a lot like a paddle”.

This is the only photographic record of what we did next. The uke proved perfect for the job, with handgrasp (the head) a neck and a decent paddle (the body) with the only problem of it regularly filling up with water! We realised, as we all started padddling with anything that came to hand, that the shore lights were coming closer and with enough effort we were going to make it back. By 1.30am a very long day indeed reached a welcome end, and after huge glasses of water and some home-smoked trout we began seeing many more funny aspects of the evening than we had previously.

Exhausted, I fell asleep in seconds, thinking about mustering the energy in the morning for another day CrossingCanada2017.

(One waterlogged uke recovering on shore)