Day 89 – There was a little surprise that I’d lined up for everyone, thinking it would make a great ending to my whole trip, but due to circumstances beyond my control the whole plan fell to bits. What happened instead proved to be fortuitous, however.

Here, for the last time on this journey, are the stats for the day!

Since I can’t find my maps anywhere, here’s a rough Google route for you instead:

As I mentioned in the “final” blog post and round-up, Stuart set me up for my morning ride with a traditional Newfoundland breakfast of Fish & Brewis – salted cod, hard tack, scrunchions and egg. Salted cod is just what is says it is, as developed and used by European sailors to survive the long and arduous crossing of the Atlantic to the site of the great cod grounds off Newfoundland and elsewhere – the Grand Banks. Without salted cod, this journey would have been impossible. Hard tack you may know if you’ve watched many nautical films – the dried bread that lasted forever and could be reconstituted with water to bulk up any dish. Scrunchions are as close to a pork scratching as you can get, but melt in the pan when fried. For my meal, Stuart replaced these with some great smoked bacon rashers.

My plan was to cycle across to St John’s and check in to my hotel, before leaving for the Cape Spear final leg on the following morning. Stuart drove me back to my finishing point from the day before, after posing for a farewell picture with Elsie: 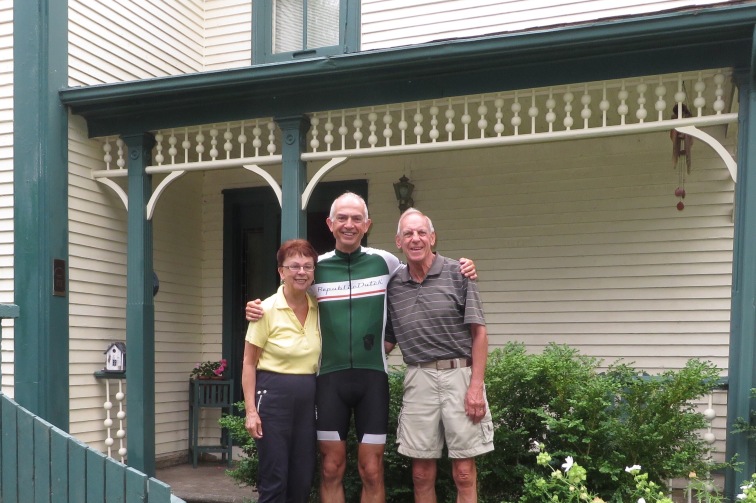 The next couple of hours were really rather odd. As I pedalled away from Stuart, and back on to the Trans Canada Highway, I felt that dreaded and quite unfamiliar feeling (I’m glad to say); I had no energy whatsoever. It was obvious to me within the first five minutes on the road – I was in trouble. Whether I was paying for the relatively late night out, or a delayed reaction to the long ferry crossing, I’m not sure, but nothing I did made any difference. Each kilometre felt like ten, every hill was a mountain, every gust of wind a gale. I’d checked my route before leaving and knew that there was nowhere to stop for at least two hours’ cycling, maybe more at the feeble rate I was managing. There was nothing for it but to get my head down, not to feel sorry for myself, and sort of ride it out. Somehow the distance ticked by, and I finally saw the very welcome sign of a Tim Horton’s in the distance, rising above the tree-line and visible from a few clicks away. It spurred me on, and I collapsed into a booth with a big cinnamon bun and a dark roast coffee and the local paper about half an hour later. My spirits slowly revived, especially when I read this headline in the Friday paper, which I think I’ll call today’s first Sign That Is Funny: 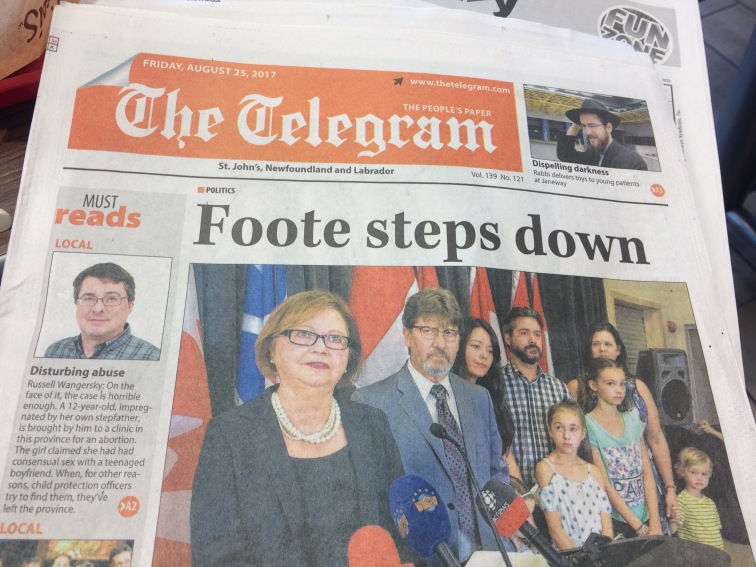 Humour is a powerful aid to recovery, and I was thinking that I’d probably get down to my hotel without too much trouble after a bit more food and coffee. Then I opened my emails.

Here was my plan for the big finale to this trip – Stuart had forewarned me that on the very Saturday when I was going to dip my front wheel in the Atlantic, there was a big festival planned at the Cape, to mark the momentous completion of the Trans-Canada Trail (a bike/hike/skiddoo trail that now crosses the continent – I used small segments of it but it’s not great for loaded touring bikes). There would be crowds, food, t-shirts, speeches, and hopefully a big shout-out for SOS Children’s Villages by the organisers (I’d been in touch with them already). The coincidence was so ridiculous, and I felt it was destined to end like this. I had pre-registered as it was likely to be over-subscribed, and the whole thing was set to go. Then I got an email: 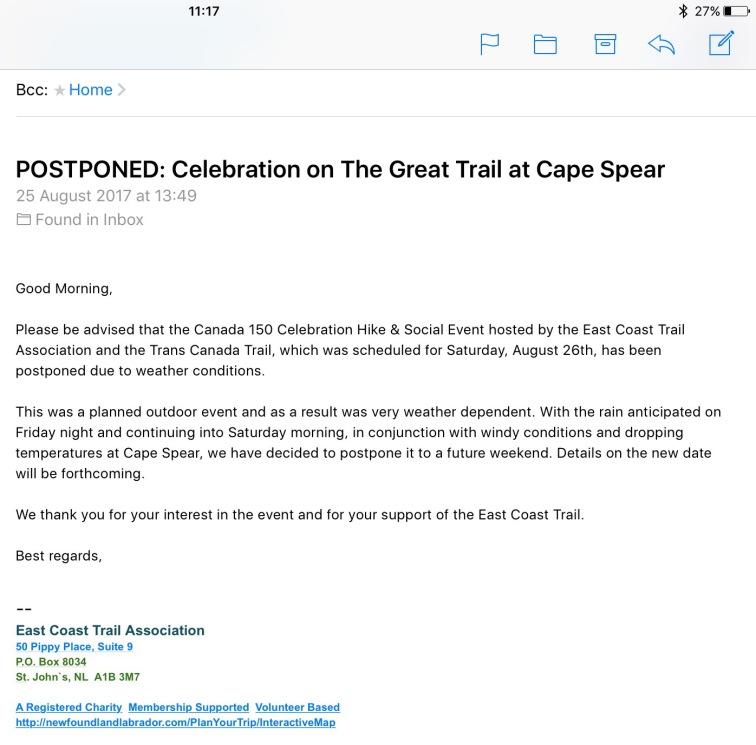 Now you can imagine that my first reaction was “Oh no!”, but as I thought it through the idea of cycling out to the infamously-exposed Cape in strong winds, rain and lower temperatures on Saturday morning began to seem like a horrible end to my trip. I checked the forecast, and realised that the still, balmy, warm and dry conditions outside this afternoon were my very best chance of a pleasant ride. My plan changed in an instant – gulp down coffee, cycle as fast as I could humanly manage down to the hotel, unload my panniers, (I can’t tell you the thrill that thought gave me) and head out straight away. I flew along the highway to St Johns, pausing only to take a photo of one of my favourite Sign’s That Are Funny from the whole trip. Bear in mind that this sign is advertising a large plot of land, trying to induce businesses to sign up for a site. The hard-sell approach may be the best?:

It was only when I arrived at The Greenwood Motel (undergoing renovations before re-emerging as the Riverwalk Motel) that I remembered how exhausted I had been only a couple of hours earlier. The fatigue had magically disappeared. Could that be the secret of the Fish’n’Brewis breakfast? The world’s greatest example of a slow-release carbohydrate energy bomb? Whatever it was, I was riding on air for the rest of the day. The stretch out to Cape Spear is one of the most notoriously hilly stretches of the entire transcontinental journey, and often persuades cyclists to finish at the city itself rather than pile on the misery, but once my bike had shed its fifty-plus pounds of pack, I felt rejuvenated. For the first time since leaving England I felt like I was heading out on a simple hilly bike-ride loop to see what sort of shape I was in: 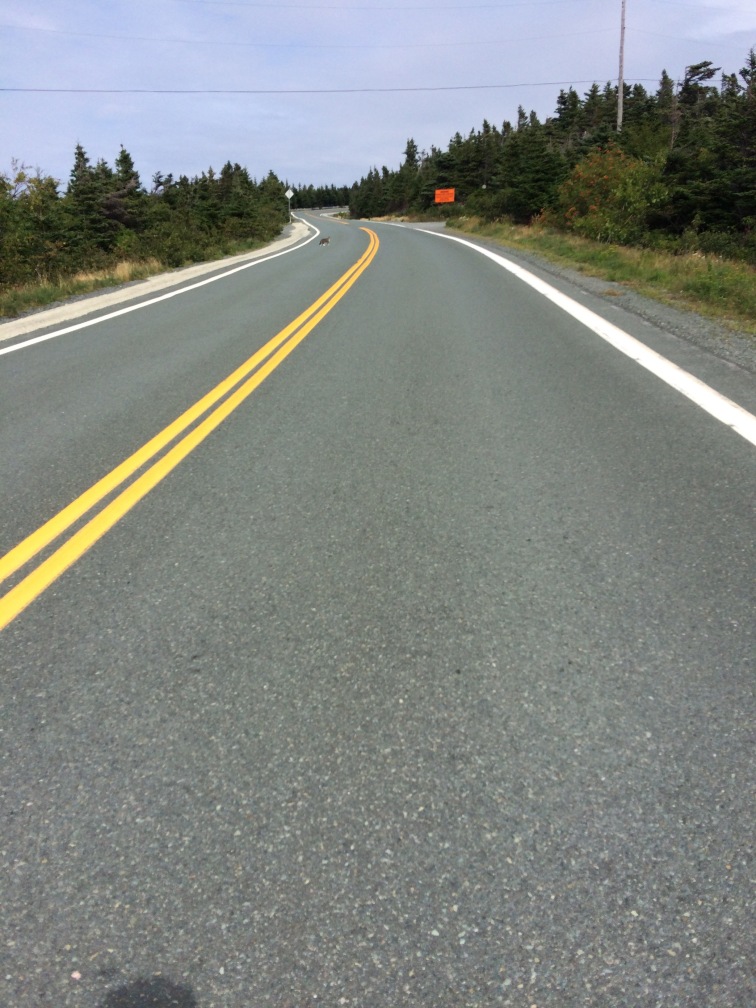 (Spot the cat, not too bothered about transcontinental cycling?)

The hills came thick and fast, one after another, along a virtually deserted road (the most numerous fellow-users were cyclists heading back the other way! I guess the forecast forced the hand of many other travellers). I began to realise what had been going on whilst cycling across Canada with all this weight on the bike – my legs were now ready for anything. In total, as you stat-aficionados will have spotted, I climbed more than four thousand feet in the thirty kilometres there and back, more than at any other similar distance anywhere in Canada, Rockies included. I arrived at the Cape in a heap, having been spurred on to go harder and harder at each hill as I felt in such good shape. I stopped to take one picture looking back at the entrance to St John’s harbour, or “The Narrows”, with historic Signal Hill clearly visible on the right (more on this to come in a future post, as I spent my ‘extra’ day in St John’s climbing up it!):

…then made my way to the eastern-most landfall of the North American continent, where a lovely group of retired schoolteachers took my picture for me, and generally made a big fuss which was very welcome! I know you’ve all seen this before, but I’m going to end where the next posting picked up, finishing my long, long journey, at the end of the very last bit of road in Canada:

6 thoughts on “Day 89 – What Really Happened on Newfoundland, contd.”