I was completely off-grid in the mountains (not even a shower block at the riverside campground) so there’ll be at least a day’s delay on this post, maybe the next one too!

Feeling like I’d just sort of slunk into Hope in the rainstorm and kept to myself at the motel apart from a trip to the grocery store, I admit that I was pretty surprised and proud to see that the District of Hope (best district name ever) retweeted and posted the  following one-word comment on my tweet. Thank you DofH, I’ll reciprocate as soon as I have wifi again! 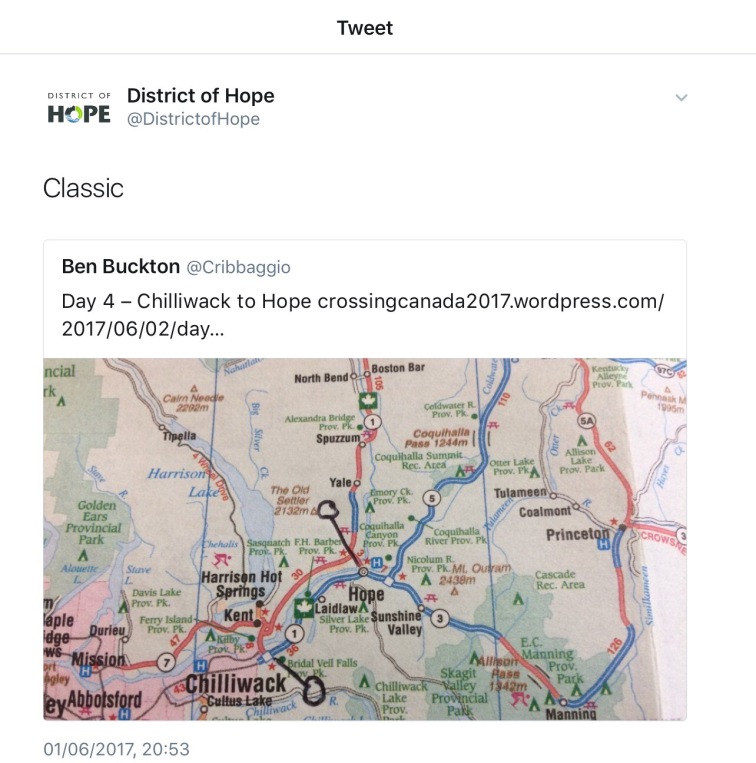 Now, back to Friday…another crazy day for temperatures, but also for climbing. That was definitely the longest near-continuous climb (up and over Allison Pass) I’ve ever done. The guy at the Motel said the locals call the first section “9-mile-hill”. After that there’s a beautiful wide plateau for several miles, then it’s back to the climbing for all but the last 10 miles, which are an exhilarating descent all the way to Mule Deer Campground

The rain had not let up overnight and I finally left the Motel at about 7.30am after waiting to see if it would stop. By the time I’d been going an hour or so on the road I’d use all day, the Crowsnest Highway (Highway No3), it was warm at least. As I passed one of the many beautiful waterfalls by the road, the damp, warm fug I was riding in was suddenly displaced by a waft of cold mountain air, as if it had travelled down the mountain on the surface of the water, and I got a lovely cool draught of it. It had a sweet, spacious smell that made me keen to get up to the higher altitudes.

I passed a spot called Hope Slide, the scene of an awful landslide in January 1965, when the side of the mountain was displaced by a minor earthquake and 46 million cubic metres of earth, rock and snow fell onto the road, and also onto Outram Lake that used to be here. The road is now 70 metres higher than it was. Several poor people in their cars were killed in the massive wave of mud that was caused by the lake being swamped.

The tribute to the RAF on this monument has a particular significance for me because my Dad did his National Service in the RAF not far from here in 1953 (mainly on the Rockies side at Edmonton and Banff). He lost a close friend who didn’t return from a training flight (and also came incredibly close to death himself in a car-wreck on a night out. He still has the news clipping with a grainy picture of the totalled VW Beetle they were in). 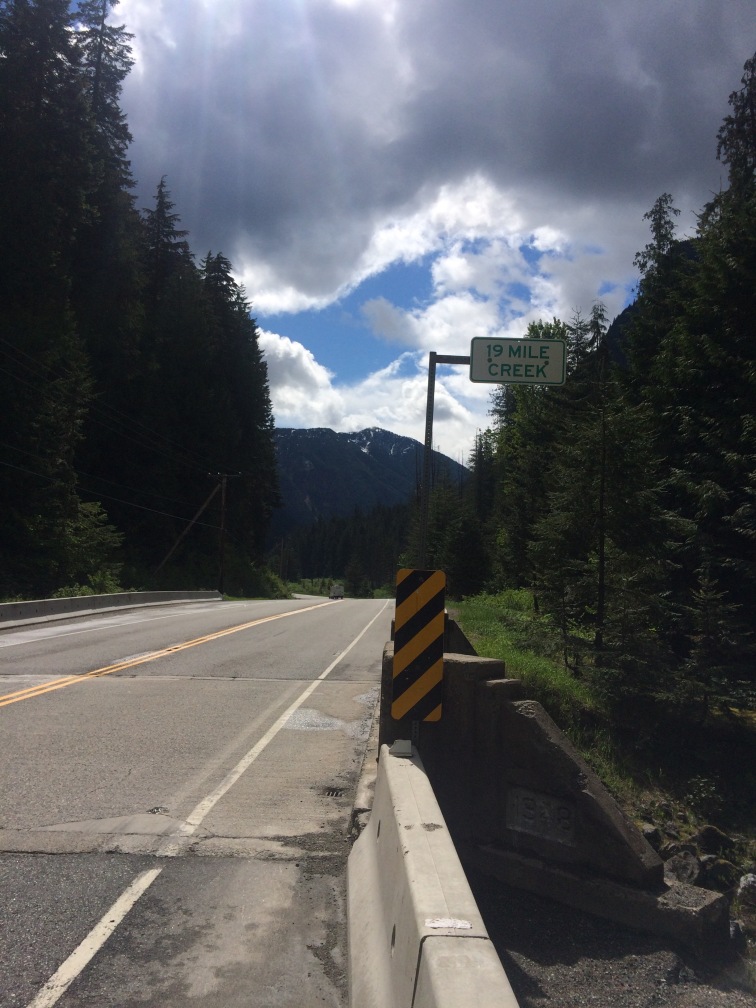 As I came to another huge, wide bend in the road, I thought it was strange that the smell of the trees, which I love, had suddenly changed. I was just thinking that it smelt like fresh-cut timber, which was odd, when this appeared around the bend: 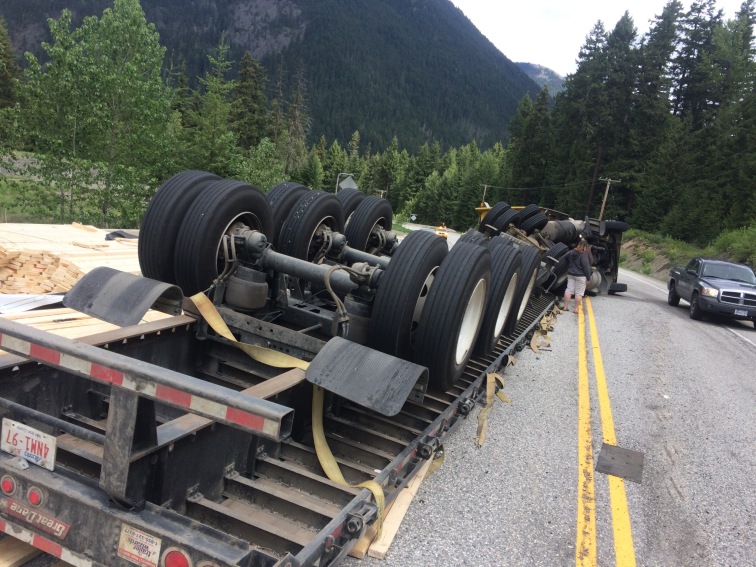 Obviously the driver, who had hurt his shoulder but was otherwise ok and in hospital by now, took the corner too fast and clipped the concrete edge. His immense load of timber was strewn all over the road. The other smell mixed in that I hadn’t identified was anti-freeze, as his lines had all been busted and the stuff was leaking out all over the road. The most incredible thing to me, though, was the way all the local drivers that had arrived at the scene, including several fellow truckers, took it upon themselves to manage the whole situation: a team with “SLOW” signs were warning traffic down the hill, another doing the same on the uphill side, and they had earlier used another truck to drag the flipped one out of the way enough for one lane to be useable. I wondered if the driver might have been distracted by one of the countless Supercars that ploughed past me all day. Ferraris, Lambourghinis, Maseratis, Porsches, Ford Mustangs, car after car came screaming up the hill. Also a lot of souped up restored classic cars. They seemed to come in batches, with each batch having a bit of a race with each other. The road is very wide, so I didn’t feel unsafe, but the NOISE! I suppose being hemmed in by the mountains on either side amplifies everything. At one point I saw a man walking back down the hill. I asked if he was ok, and he said he’d lost a hubcap. I told him that I hadn’t seen one (I imagined it would have been a very shiny one!). “There it is!” he shouted, and ran off down the hill. I carried on to his friends waiting by their Hot Rods. They were older guys, trying really hard to be super-cool and pro-racer-like, but it just came across as sullen. They said they were heading to Osoyoos for an event (I later found out that it’s a new private race track where you can race your supercars for a joining fee of $45,000, plus a big $1000+ fee on the day. What an extraordinary waste of money).

These slower (but still deafeningly loud) classic cars were the only ones i managed to get a picture of. The Maseratis were in Princeton by the time I got my phone ready for a pic!

All the ascending started to numb my brain a bit, as well as other parts of my anatomy, but I think you sort of know when you’re near the top, like being near the sea, and it was great to get my first proper Canadian mountain pass under my belt.

As usual, I’ve put my finger in the photo to give you an idea of the scale of this climb. Ha.

I’ve been feeling bad making Sam feel he should be answering all the nature questions (although he has done so quite happily so far!) so I thought I’d rename it today “What Is It, Seb?”. My younger brother may have even less time than Sam, with all his work and young family (Hello Nell, Theo & Eddie! And Karen of course!xx), but it’s only for a while. As ever, anyone can actually answer. The name is just an honorary thing to reward outstandingness vis a vis knowing the names of things. Here we go:

This amazing (and large) butterfly was at a lake I passed that had a 10-minut walking route, just right for my journey! 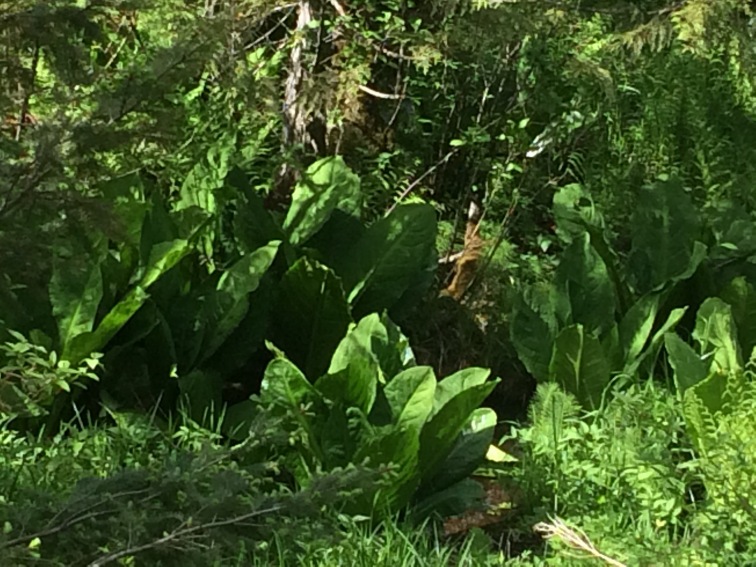 These were really large, almost Gunnera-sized. Anyone?

Is it just me, or is this gopher on the right doing the “I’ll make him an offer he can’t refuse” mafia-shrug from The Godfather? 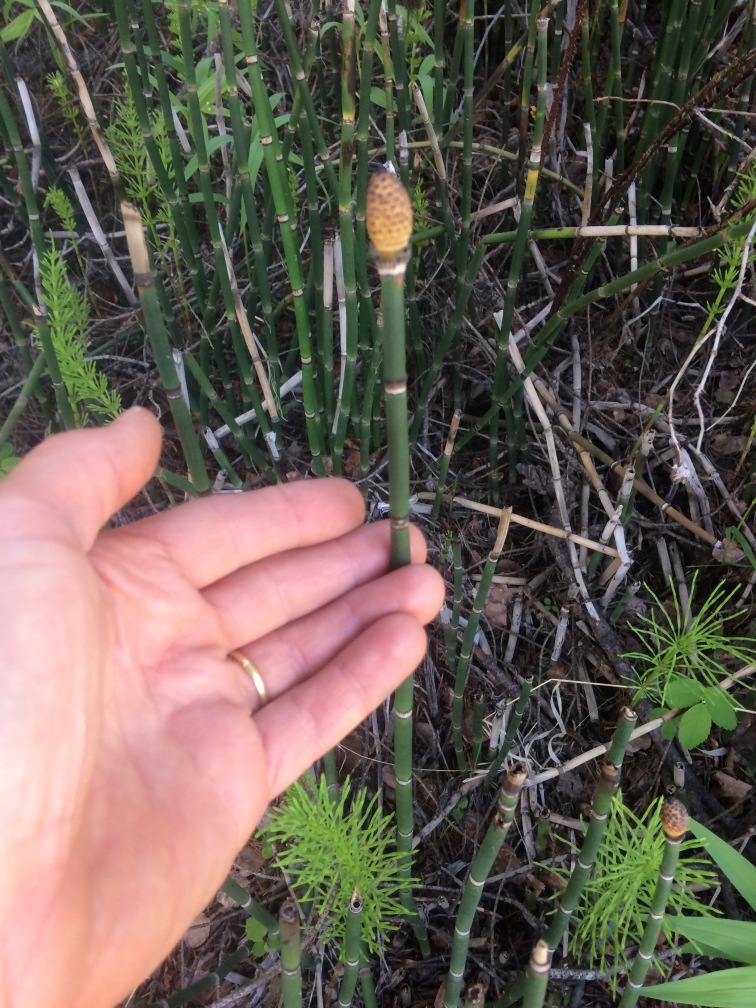 As usual, today I had to chose an item for the Getting Rid Of Something Every Day project: 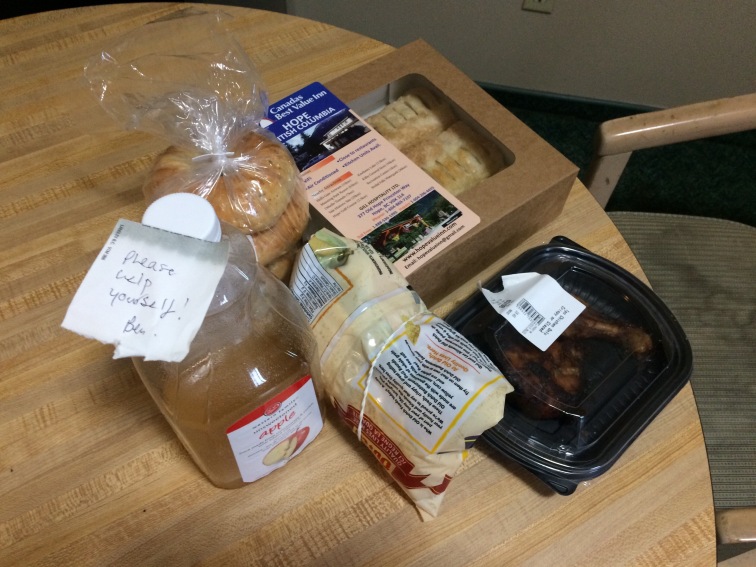 OK, more than one thing, and perhaps it shouldn’t count as I’d only bought this food in Hope (every time, gets me every time! Crazy town) the day before to make sandwiches and for supper, and couldn’t contemplate carrying all of it over Allison Pass, but I thought the nice cleaning lady might appreciate the offer of a free lunch. It’s probably already in the bin.

And now…Signs That Are Funny. Every time I see this road sign I think of yellow cloths and the cutlery on the kitchen table.

PS I’ve just got back to my tent after a chat and a bowl of delicious Peach Cobbler around a fire pit (with Brian, Tiki, Paul and I’m afraid I’ve forgotten Paul’s wife’s name) at the RVs next door, to find that I’ve inadvertently got rid of a few more things. A Raven had found my food bag, pecked it open and fished out whatever it could. Not much lost, just lots of little things, as I’m not carrying that much to begin with! Clever birds – should’ve got a Corsack. Looks like I’m shopping tomorrow.﻿