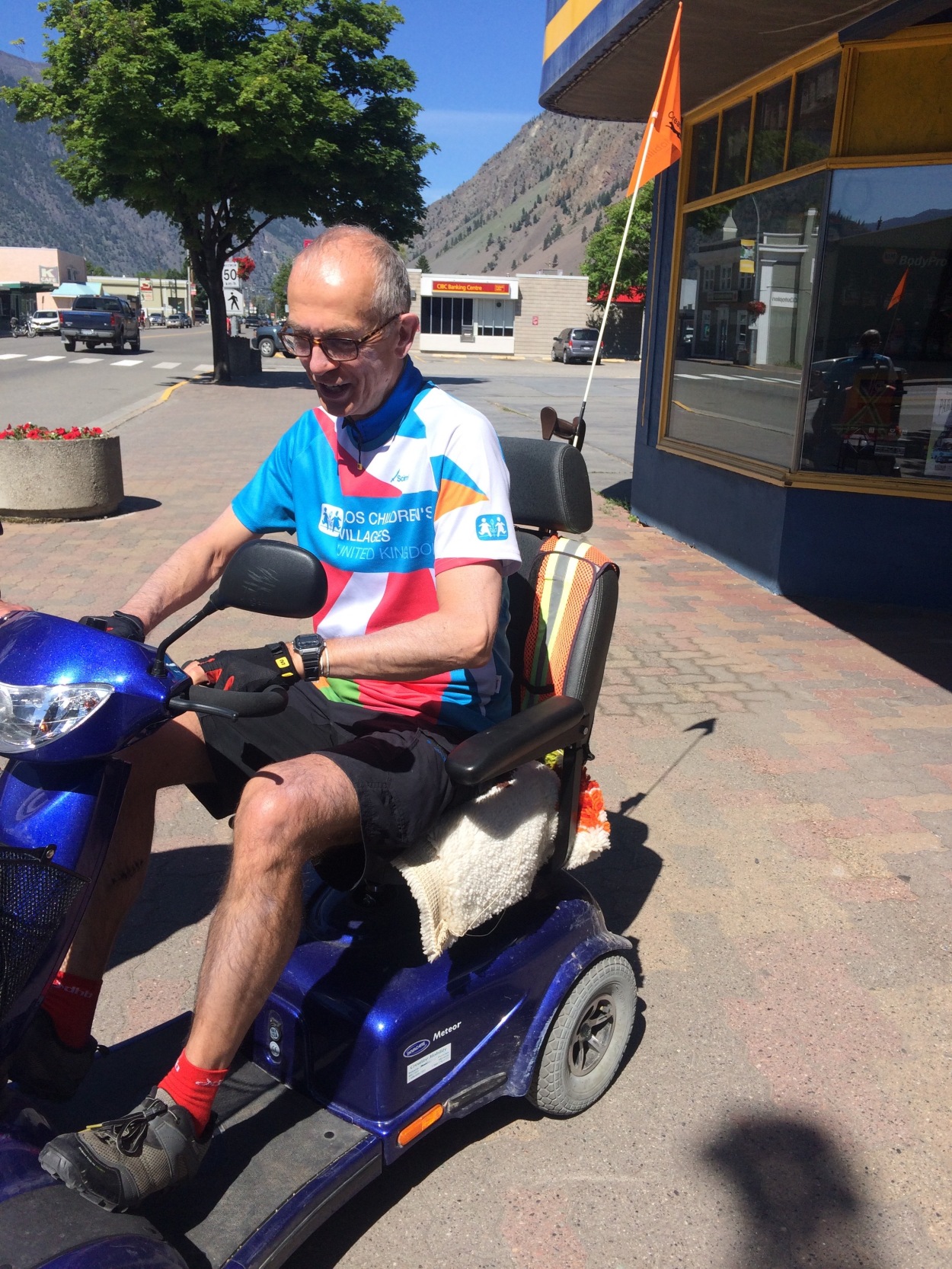 Day 8 – Hedley to Okanagan Lake Provincial Park. This was the first day of my second week, which seems to have passed very quickly, and what a great day it was, mainly for all the people I met. It was another chilly start so it took a few minutes for my legs to get up to road speed. Once the sun was filling the valley the temperature soared and I was down to short sleeves in no time. I came round a bend at one point and heard a strange rattling noise; looking to my left I saw quite a big rockfall happening before my eyes, and just caught the tail end of it on camera:

On a similar subject, I’ve been a touch edgy whenever the possibility of bear-encounters increases, and when I’m completely on my own in a densely wooded stretch of road I do find my mind strays a bit. Yesterday I was on just such a spot on my way to Hedley when I heard a deep, sonorous gggGGGGGGGGGggggrrrrrrr! My mum & dad live very near to Linton Zoo in Cambridgeshire, and the resident lion can sometimes be heard making a very similar deep rumbling roar in the early evening. I immediately thought to myself, get a grip, it’s not a lion. But it might be a bea..ggggGGGGGGGRRRrrrrr! My heart beat faster and I scoured the hill beside me for any sign of movement, trying to remember all the bear-advice but also sizing up my chances of turning on a burst of speed (for want of a better word, on my set-up). I waited a little longer, then I heard ggRR, GGrr, splutter splutter, brrrrm brrrmm – the (now) unmistakeable sound of someone struggling to restart a chainsaw. I felt like SUCH a twit.

I packed as much water and Gatorade as possible this morning, since I’m now heading into an area that could almost be classified as desert, if it weren’t for all the lakes filled by mountain streams. It’s all at around 2,000 feet and mostly wide open to the sun. I’ve just checked my bike gps and it says it got up to 39 at one point. This is fruit and wine country. 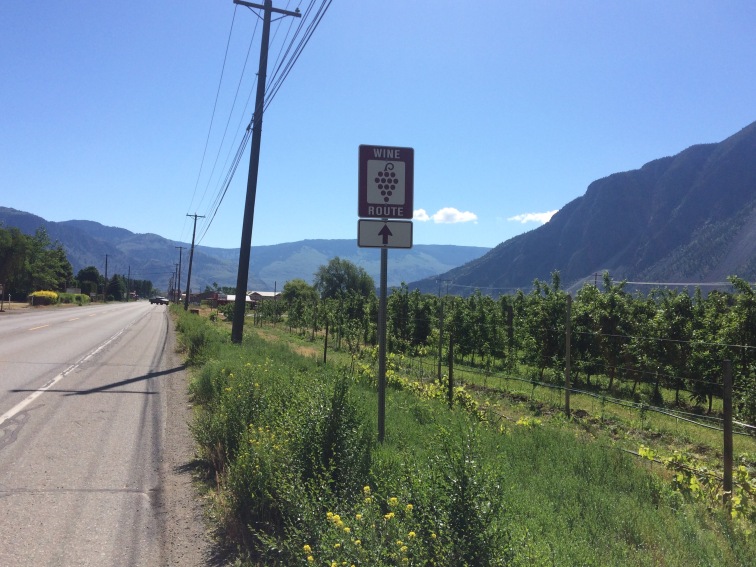 There’s a scene in the movie Michael Clayton where George Clooney is driving home at dawn through the woods (spoiler alert, in case you’ve just bought or downloaded it!) when he comes upon a group of three horses standing in a field, absolutely motionless (a significant vision in the movie), and he leaves his car to cross the field to stroke them. Just as he pats the neck of one of the horses, there is an enormous explosion behind him, as a bomb planted in his car is detonated.

The horses didn’t move, but I didn’t leave my bike, and I didn’t pat the horses.

I passed a local ancient monument called Standing Rock, which has not survived the modern “spray-can” era as well as it did the previous hundreds of thousands of years.

The first big town was Keremeos, where I stopped at a pharmacy to replace a few more raven-theft items (amazingly, the raven had opened a small screw-topped jar of chamois cream, used to avoid saddle sores. I’ve told a couple of people this, and they’ve just said “Oh sure, they’ll do that, no problem” etc. How? Claw, beak, turn, I don’t know) I went straight to the baby section and got myself safely protected from any kind of nappy rash. The apple sauce looked tasty too but I resisted.

As I got back on my bike, I earwigged the following conversation between a woman with a very bad limp, talking to an older chap sunning himself on a bench (verbatim):

Woman: “God downloaded a vision to me last night, of Hart surrounded by bottles and bottles of beer, and I just thought I know he’s gonna quit drinkin!”. Old chap: “A harp?! Why a harp?” “No, Hart, y’know, Hart. There he is!…..hey, Hart! Wait up!!”

Then coffee at Emmy’s Bake Shop, and I’m so glad I stopped there. A couple of regulars were sitting outside, but as the minutes went by more and more arrived until a gathering of seven local guys were all around the table next to me. They were such a bunch of jokers, and kept asking the waitress for Rodeo cookies, which I think is horse dung judging by the laughs. At one point a chap in full paramedic uniform, looking very smart, walked past the cafe a couple of times. Rocky, one of the regulars, shouted out “Hey, we’re still saving up for that Ambulance for you Bob! It’s taking a while, but we’re getting there!” Big laughs all around the table. We chatted a bit about my route, and I talked with Rocky about the London Bridge news story, the Rodeo that happened here last week, and I got talking to Hugh, who told me he was 85 and originally from Verwood, Saskatchewan. Finally, I’ve met someone from the Big Gap (in my itinerary). I just haven’t been able to find any connections between Calgary and Winnipeg. Since he was born there in the 1930s and left as a child, it’s tenuous, but it’s there. He had arrived for coffee on his smart blue mobility scooter, but was happy to let me have a go: 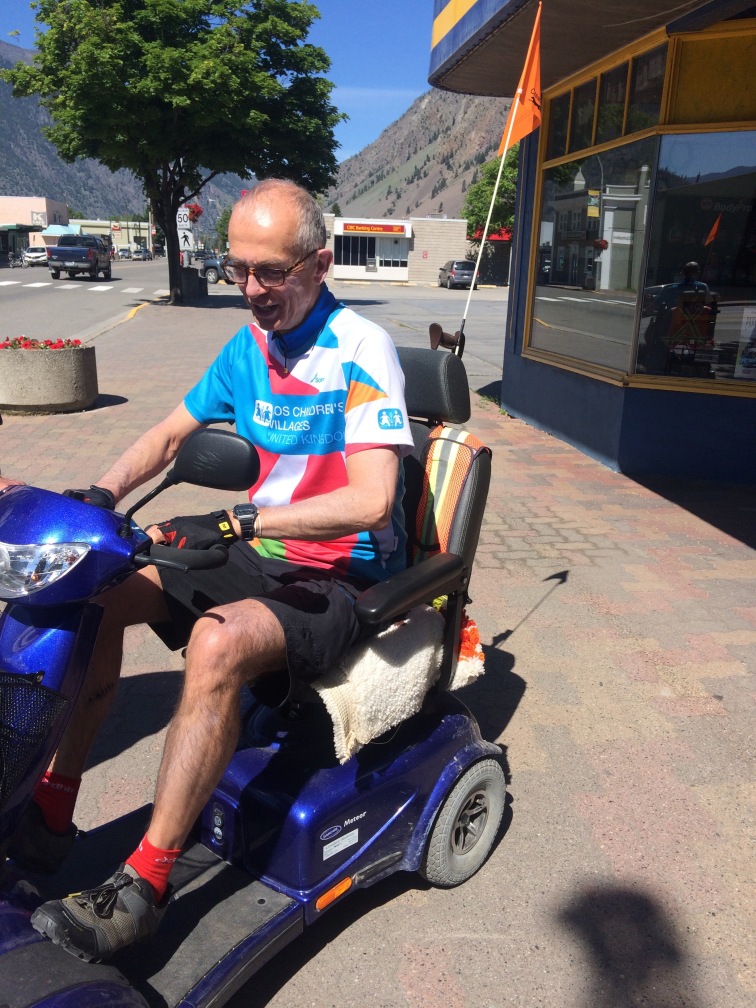 Then as I said goodbye inside the restaurant, I got talking to a lovely couple, Dan & Celia. Dan was Canadian but Celia was originally from Macclesfield, and you could tell from her tan that she doesn’t go back much. They both had health issues but were putting a very brave face on the problems they caused. They told me they had 4 children including 2 adopted Sri Lankan kids, all now grown up and living nearby. I promised that I’d find out about my relative who ran a mission in the North of the island and was visited there by my parents in the mid 1980s. Have you got the details Mum??

The cycling from Keremeos up to Penicton was probably the hottest of the trip so far. I stopped off at a Tim Hortons to cool down in the aircon and use the wifi, but they were both as useless as the iced coffee I ordered. If I’d wanted cold wet sugar I’d have asked for it. I got back on the road asap, wishing I’d managed another FaceTime call home, and followed Highway 97 all the way to Okanagan Lake, where I stopped at Summerland beach to cool off with a quick swim. What a lake it is. I’ll put a few photos in here, but honestly I can’t do it justice, especially on such a perfect day as this.

​​
As I went in I was greeted by the guy you can see there, Dewey, who asked me all my bike. He turned out to be a great guy, a bike designer with Kona Bikes who make a very cool touring bike, the Kona Sutra (!) that I considered for this trip before opting to build my own. What a ridiculous coincidence, especially since Micah Markson, who I met up with in Tswassen, has a tie-in with Kona for his TDA Global Cycling company and was riding a Kona for his trip to the Rockies. I’m trying to find out if Micah has met Dewey, who says he’s been at the company for years. We got talking about music and I mentioned my uke, and we were off! Dewey was there for a swim with his family, and they love the uke, play it, gave me some tips for players to listen to (Ralph Shaw), and then insisted I get my uke off the bike to play a couple of numbers. 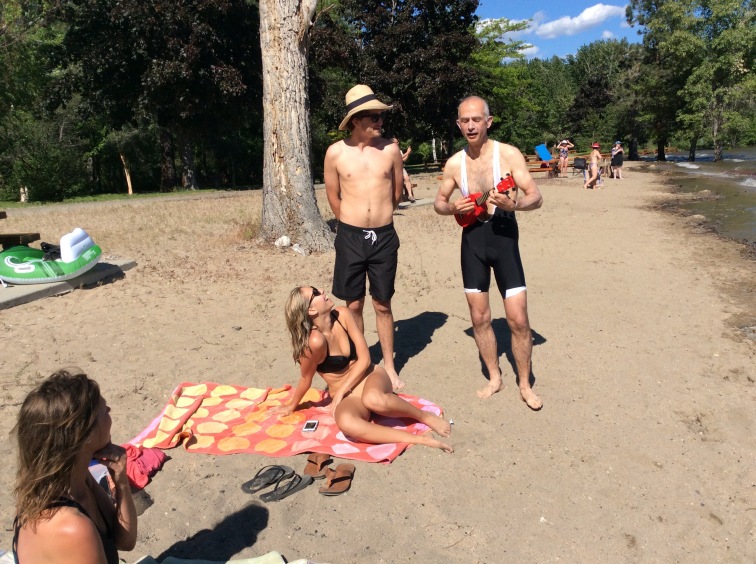 It was such a nice surprise bonus when all I’d planned was a 5-minute dip. Thanks for the local advice too, Dewey, and sorry there’s no picture of you apart way out at sea (lake)! I’ll be in touch for suggestions when the need for an N+1 bike kicks in again.

After a long smooth descent I turned off the highway, went down a winding track down to the lakeshore, where my campsite lay waiting down below: 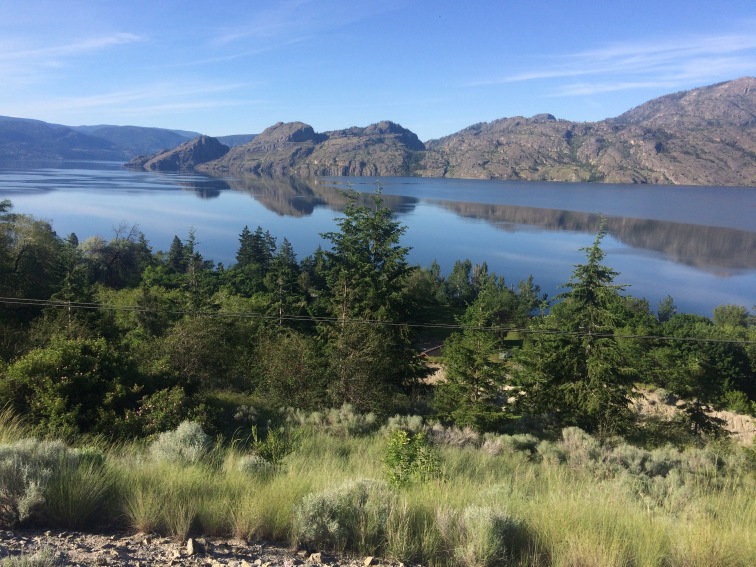 Terry at the office, a Scot settled beside this Loch, found me a stunning pitch right by the lake, as I was only staying for one night. He also asked me why God invented alcohol? I said I had no idea. “To stop the Scots from taking over the world!”

I got very hot pitching my tent and unpacking, so there was only one thing for it – a last swim of the day:

A wealth of Signs That Are Funny today, after a lean spell:

After my lamb burger comment yesterday about there not being many sheep around here, wouldn’t you just know that this sign would be waiting the other side of Hedley: 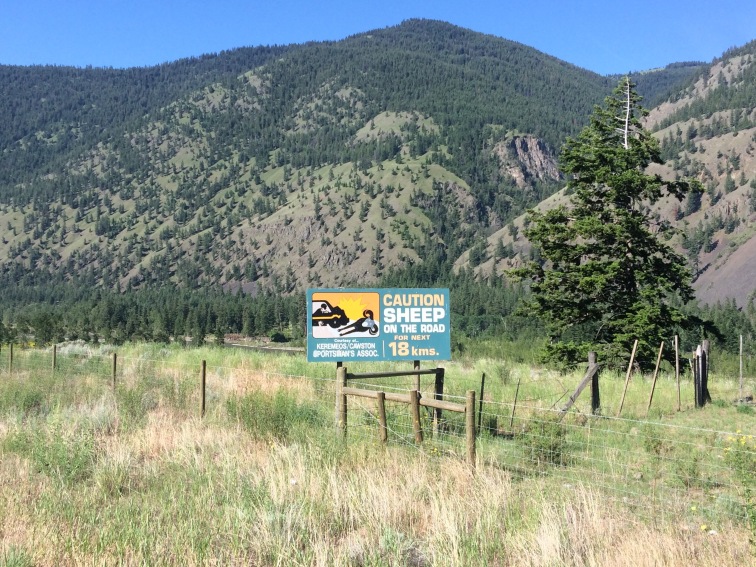 Club Sandwich? Chips? Sand wedges? Or just plain bread and putter? Come on John Mills (and any other punsters), I know you’re already on the case… 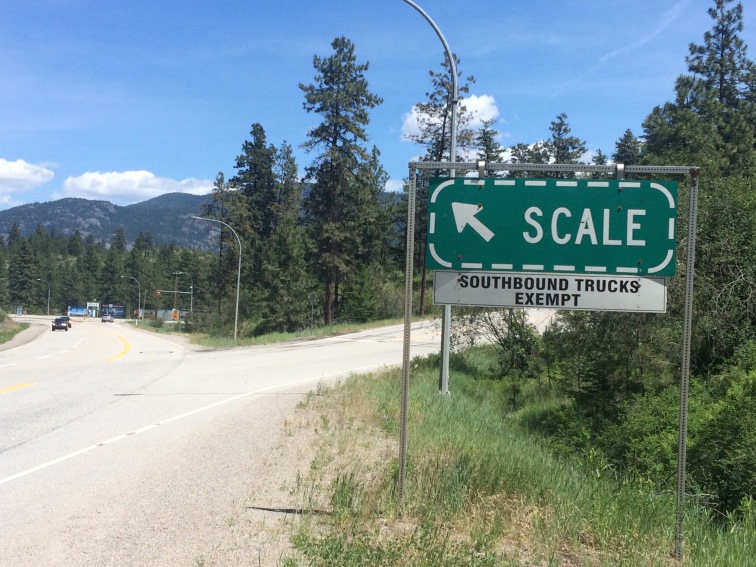 I say that we should all practice scales, whichever way your truck’s heading.