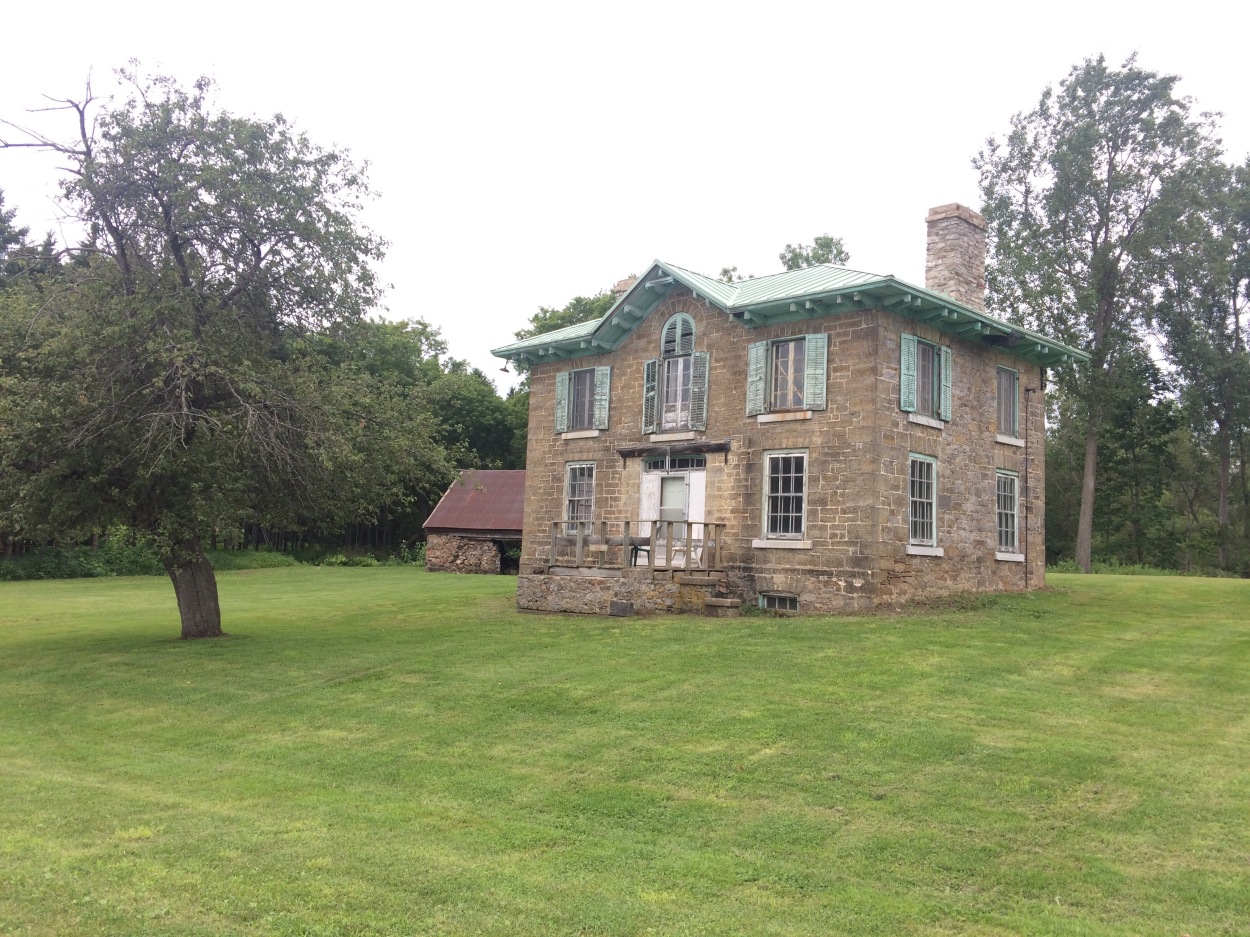 Day 59 – Adolphustown to Ivy Lea Campground . I’m still riding the King’s Highway, aka The Loyalists Parkway, the closest thing to a little bit of England that I’ve experienced so far. The towns en route today included Bath, Sandhurst and Kingston. 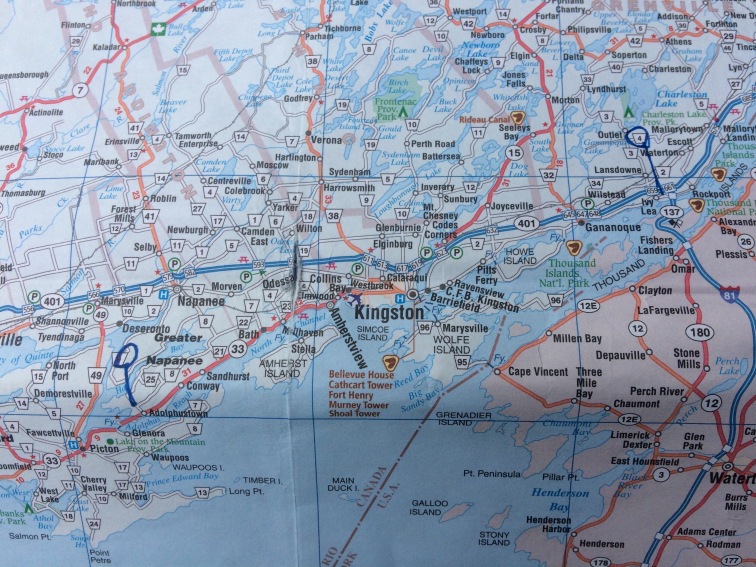 Waking up at the campground this morning I decided to take my time since it was such a nice spot and I had slightly less far to travel today. I met a guy called Bob who lives here in a permanent RV but has travelled the world, particularly the Congo in Africa, as his Belgian wife had a father working out there as a cultural attaché (she had lived there too until reaching school age and been sent home to Brussels). Bob told me stories about hunting water buffalo out in the bush (they attacked the landrover and left the front in bits) and coaxing a baby elephant out from under the house-on-stilts, like calling a nervous dog, hand extended. The elephant gently extended its trunk once it felt safe, and Bob gave it a friendly shake.

I was sad to leave, knowing that these places are quite rare. The road ran incredibly close to the lake for the first 25 km, and I was swooped over by an eagle of some kind, whose nest was perched on a telegraph pole with a nearly-fledged youngster inside. The adult was carrying something, possibly a snake, and landed in a tree in front of me, waiting to see what I was and what I was doing. As has often happened on this trip, wildlife can be unperturbed by any amount of noisy road traffic but find cyclists very surprising and give you their full attention. The two birds screeched loudly at each other and me, using an impressive variety of calls. Thet’re not Ospreys are they?? 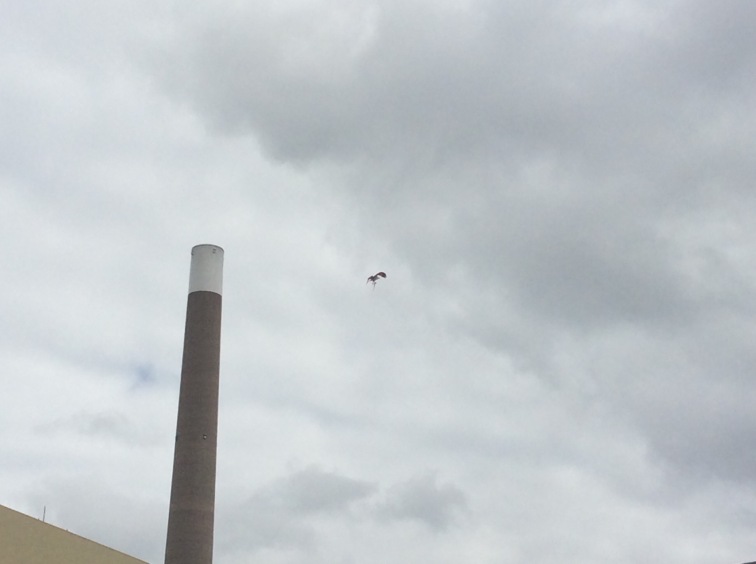 I stopped for either a second breakfast or lunch in Bath, which made me think of a newspaper headline years ago when Yehudi Menuhin resigned as Music Director of the Bath Music Festival:

“Menuhin To Give Up Bath”

I may resign from my Directorship of the Hope Music Festival, just for the headline.

I got a very exciting message whilst I was using wifi in the restaurant – my JustGiving page has been nominated for a JustGiving Award! I can’t think of any better way to keep the profile of this trip as high as possible to keep donations coming in, so if you feel like adding your name to the nomination, which is pretty easy I think, then please do so. I’ll try to post the address when I get a better signal!

A quick word on the thorny subject of WiFi. Jacob B says I travel the world in search of a good wifi signal, but it becomes increasingly frustrating with the proliferation of “Free WiFi” signs outside every establishment, only to find the wifi equivalent of tumbleweed when you try to log on. The winner of ‘The Canadaian Award for Consistently Poor WiFi’ goes, without doubt, to Tim Horton’s. I actually really like Timmy’s, and have taken our lads there for years. A trip to Toronto has never really begun until we’ve had our first muffin and coffee. But the wifi….it’s like one of those western towns in the movies. It looks like a real town, with a saloon, a hotel, an undertakers, horses tied up outside, but it’s a facade. Behind the doors there is nothing, just tumbleweed and wooden scaffolds. I have never managed to even pick up or send an email in Tim Horton’s. So what is it for? A packet of Minstrels will be in the post to Tim Horton’s HQ for their prize-winning service. Does anyone know where the HQ is?

I decided to divide today into 4 x 25km chunks, for no reason except that it gives me something to aim at. The 50km mark brought me to west of Kingston, where I stopped at Tim horton’s (see above).

Kingston itself was a very busy and touristy town with a nice waterfront:

At around 75km I visited a Woodcarving Museum that was housed in a fine old log-built house close to the road, previously used as a local dance hall, a home for a large family during the 20s when times were hard, and now this:

Any whittlers out there, in need of a project?

Now this following picture might not look like much, but it’s the product of a strange sequence of events just after the museum: 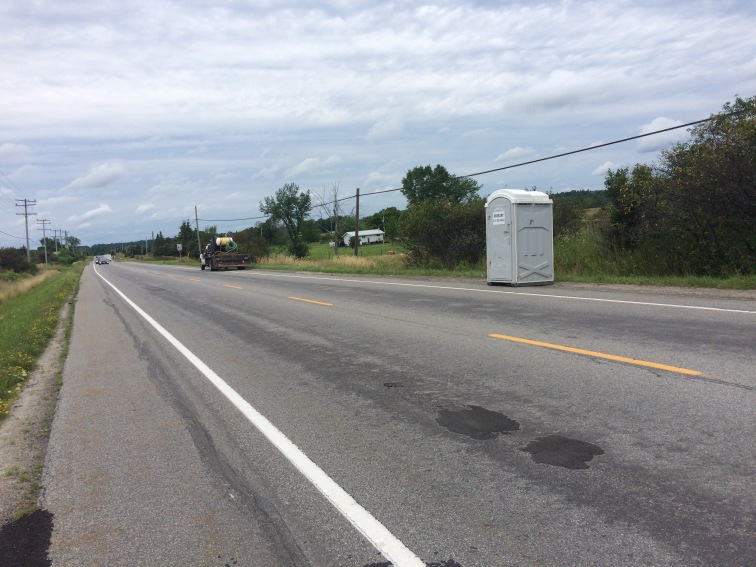 The van is backing up the hard shoulder fast, and the toilet has only just stopped moving. As the van pulled out onto the highway the driver swung the wheel a little too hard, having tied on the toilet a little too little. It slid off the back of the flatbed, landing just ahead of me on the other side of the road. The van continued obliviously whilst the toilet skidded noisily, miraculously staying upright the whole time despite lurching this way and that, for some way along the road. It finally settled neatly in the hard shoulder, and the van driver finally cottoned on to the situation and started backing up. I briefly considered nipping into the toilet and pretending I’d been there all along, but thought better of it.

84km (maths is not my strong point) brought me to Gananoque, where Scrabble was invented. Don’t look it up, it’s not true, but the name reminds me of playing with people who are annoyingly good at Scrabble. A guy I was in the London Schools Symphony Orchestra with, trumpeter/composer Django Bates, went on to form an amazing and very successful  band called Loose Tubes, and on tour buses they played a version of Scrabble called Squobble, where the only words allowed were imaginary ones. The more imaginative the word, the higher the score. They would often name tracks on their albums using these creations. Anyway, Gananoque came just as I started feeling like getting something more substantial to eat, so I parked outside an Italian place and got a salad and a huge bowl of spaghetti with meatballs for an early supper, before pushing on to my campground feeling a bit better. Not having to cook can be quite an attractive thought, and I’m still finding my way back into this trip physically, after my extremely comfortable week off in Toronto (I’m missing you all!)

As I set out for the last stretch this evening, much later than I’m normally on the road, I had a feeling that something interesting was going to happen. Almost immediately I left the highway and joined the Thousand Island Parkway which runs closer to the water and has the best stretch of bike lanes since Banff to Canmore back in BC. The first thing I saw was my very first Cardinal bird of this trip, a brilliant fiery red in the gloom of the evening. The traffic thinned out to almost nothing and I passed this very fine, deserted stone house, looking out on the water for the last couple of hundred years.:

The area known as Thousand Islands at this far eastern end of Lake Ontario is the point where you say farewell to the lake and begin to meet the St Laurence River. I came on a very eccentric musical trip here in 1978, with an experimental music group called Opus 20 (a later, professional music group stole the name and may even still be using it) that did free-improvisations and pieces composed by each of us, semi-guided by the even more eccentric director, Alun Renshaw. We played a 1 hour improvisation at the bandstand at Niagara Falls, performed at the University of Western Ontario using old-school synthesisers of the period, with the “battleships” style pin grid for programming (we’d learnt to use them at our rehearsals at The Cockpit Studios in London every term time Saturday afternoon) and on our free day we were bused all the way over here for a memorably hot and uncomfortable boat trip around the Thousand Islands. We all thought it felt like at least Two Thousand. This time around, I’m much more impressed by being here, and stopped at Landon Bay for ages, despite it being late, sitting on a wide, deserted pink-coloured rock after washing my face in the lovely cool water, and using my binoculars to watch three magnificent osprey hunting for fish. One caught a whopper and struggled off to the woods with it thrashing in its claws (the usual awful bird pictures I’m afraid):

By the way, I’ve received word from the senior management of CrossingCanada2017 that a major decision concerning the next few days of my trip may well be announced sometime tomorrow. They never tell me anything. 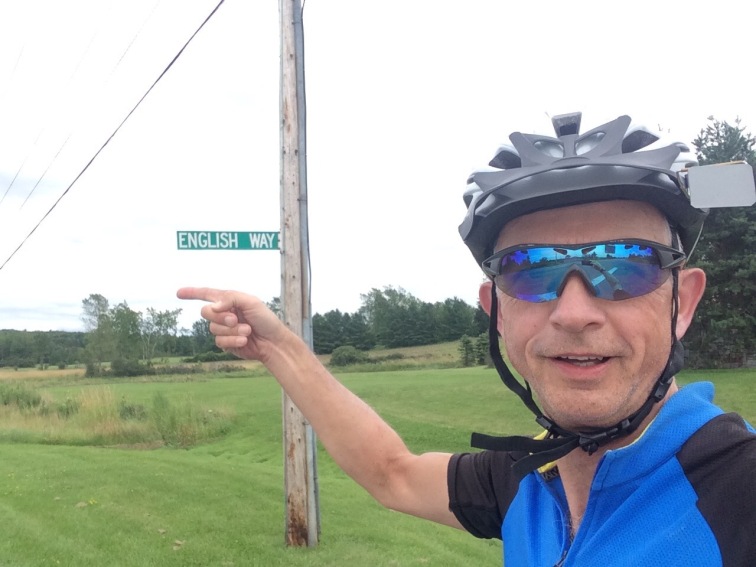 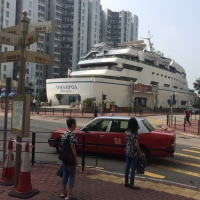