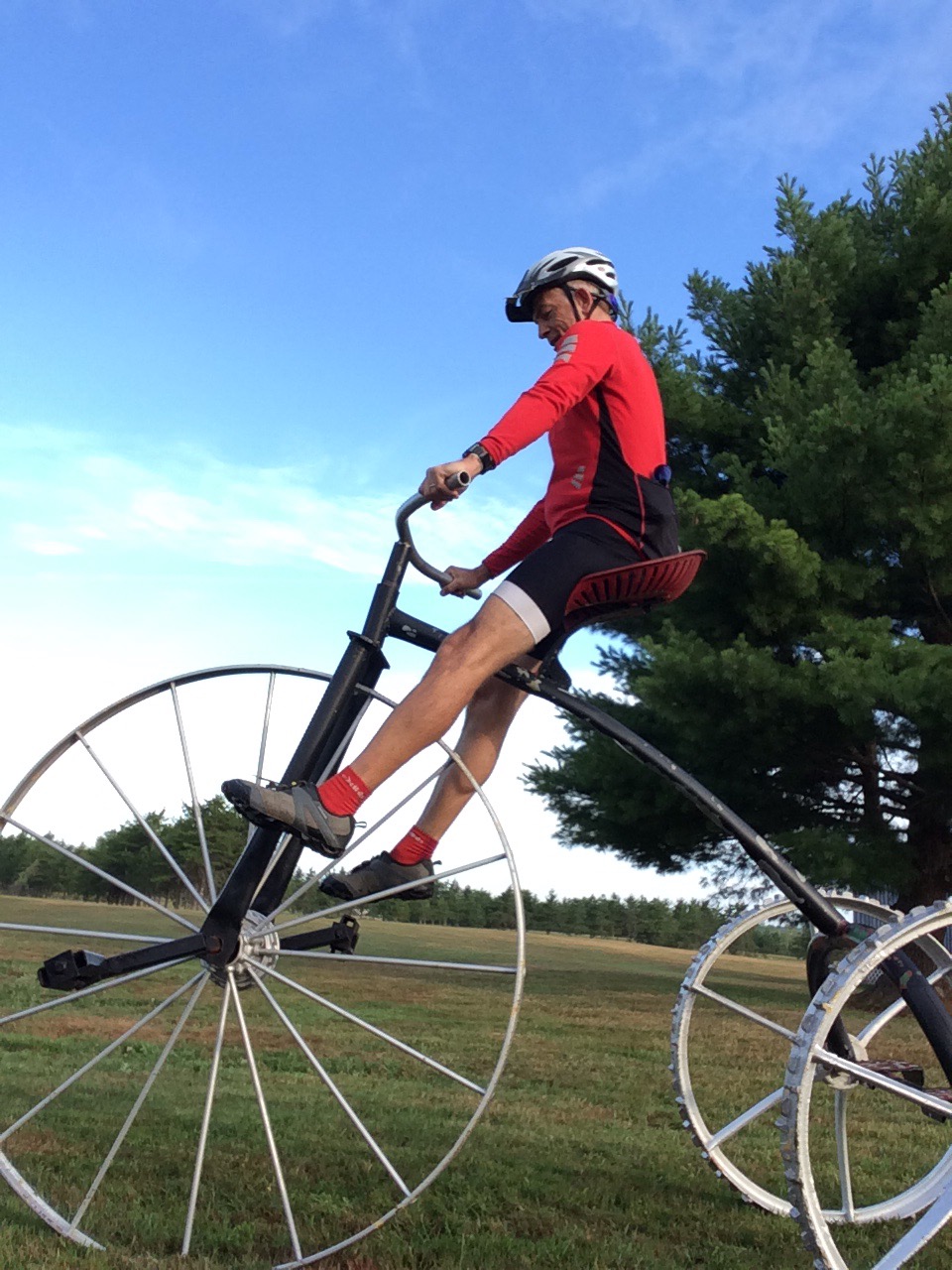 Day 75 – As confidently predicted by my Weather app, violent thunderstorms broke this afternoon, but for once I had the tent up, had showered, eaten, chatted with the owners at the office in the hot sun over an ice cream sandwich, all before the skies darkened. I got back to tent, secured it outside and climbed in. Shortly afterwards there was a terrific rumble of thunder and the heavy rain followed shortly afterwards. It’s only 5.15pm as I write and it’s very cosy here inside the tent, with occasional brilliant flashes of lightning. 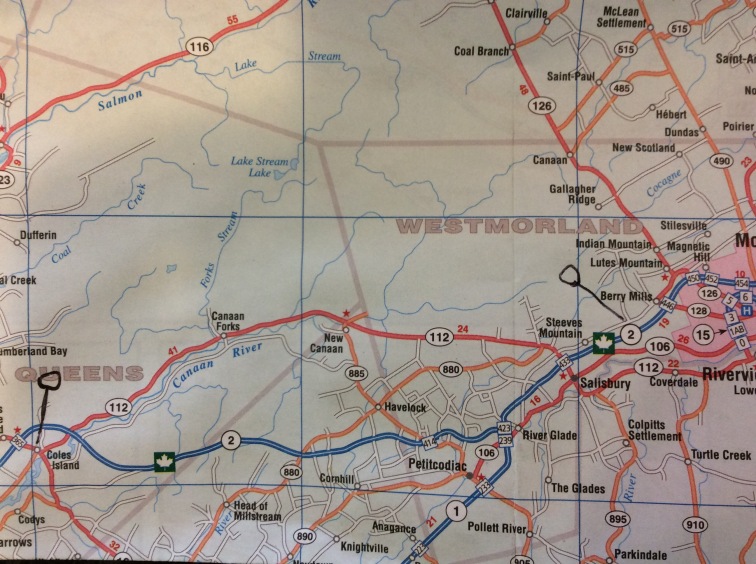 First thing today is some fantastic news – congratulations to my good friend and FOTB John Mills and his wife Carrie, who had a baby girl this morning, Olivia. She’s a bit early so John gets to take a break from work a little sooner than planned! I’m sure the the Proms don’t mind. Very best wishes to all of you.

Trailerhome after trailerhome was arriving as I spoke with the owners, in a long line coming down the hill through the woods off the Highway. I can see why it’s so popular here – as well as the great woodland location there’s another golf course and even a large driving range with a nice old clubhouse. It was terrifically hot when I arrived and they offered me the only available spot, in full sun. I explained that after riding in the hot sun for four hours I really couldn’t set up camp in it as well, so they kindly sent me to an area reserved for picnics with lovely tree cover and tables.

The rain is now so loud on the roof of my little tent, but I have total faith in it remaining watertight. I must remember to write to MSR who make it and thank them for coming up with such a clever design. I’m sure there are many of you out there that camp regularly that will agree that the fabric being properly waterproof is obviously important, but almost as important is keeping tension in the fabric. Sagging anywhere always leads to leaks and trouble. This frame holds all the fabrics tight no matter what, so the fly and inner never meet (as long as you do your bit and put it up properly!).

There was no hint of a storm first thing this morning. I woke very early and found hardly a breath of wind disturbing the soft mist on the river.

Unfortunately the mosquitoes found me straight away, so I got things packed up quickly and as the sun rose I cycled across the golf course, something expressly forbidden despite the countless golf carts that grind up and down the greens and fairways all day. Something about golf courses makes me want to disrupt them. Not damage, you understand. Sorry golfers (especially Brant and Dagmar who so kindly put me up on one back in Kelowna!) but it’s probably just a phase. FOTB Jane Lodge was worried that I actually hit the golf ball with the ukulele in the photo yesterday. I understand her concern as technically the uke is her responsibility, as Head of Music at Beechwood. Jane, I promise you that no ukuleles were harmed in the taking of the photo. It was all posed, and the balls are the tee markers, so spiked into the ground. It would have made a great photo if I had hit it though, wouldn’t it? You’re never far from trouble with a uke, as this trip proves.

I spoke to my mum and dad for a nice long while last night, hampered as usual by the patchy signal. My dad spent a year in Canada in 1953, as I’ve mentioned before in the blog, and has many fond memories of being here, as well as wishing he could be here with me on this trip in some way, which I’m very touched by. I asked about the typical Canadian cedar fences, which he couldn’t recall, so here’s a nice example from the drive out of the campground, to jog your memory dad!

My bike felt a bit weird to ride on after a day off, but I soon found myself settling back in to the rhythm: 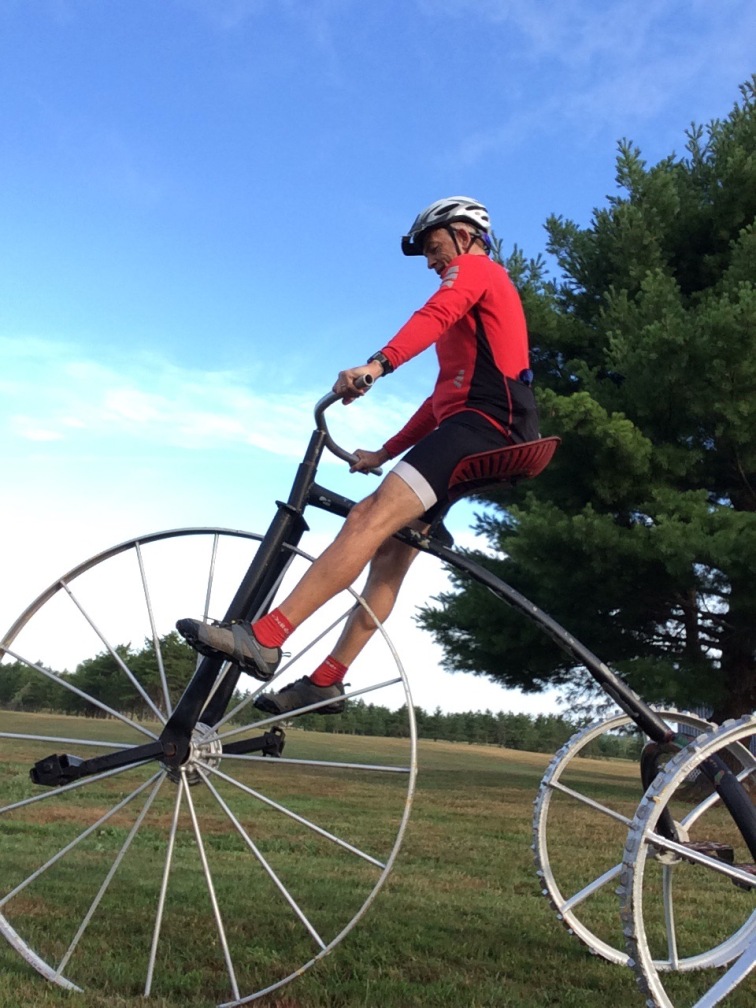 I can still hear the thunder but, like the rain, it’s now moved on elsewhere, and voices are starting to be heard again around the campground. It’s the children who get outside first, eager to see what’s been going on whilst they were cooped up inside, and their chatter and playful shouting is the sound of a campsite in the early evening, whilst cooking is going on in the adult world. Next it’s the inevitable sound of starting engines. No red-blooded Canadian male on holiday is ever more than 10 minutes away from starting an engine of some kind. I’m so glad I’ve spent a storm under cover at last, instead of running or cycling for cover and getting soaked in the process.

The projected visit to a place of great interest will have to wait until tomorrow due to the weather. I got here early for that reason, but I never mind a long afternoon off the bike, particularly when it means I miss out on getting drenched.

Wow – a small bird, possibly a sparrow, somehow just flew under the fly and hooked its claws into the mesh window of the inner, right next to my head! W﻿e looked at each other for a second in mutual shock, then I grabbed my phone and it flew away, deftly going just between the fly and the ground. Clever fellow.

There’s nothing else for it but a very early night tonight. There’s a nice quiet, subdued sort of feel to the campground after the deluge. There has been a No Campfires law in place for a while here in New Brunswick, due to the spell of fine hot weather, but when it rains the ban is lifted temporarily and everyone piles up their firepits and gets out the marshmallows. Except that seeing as we’re in Canada it’s not just marshmallows; it’s also chocolate pieces and biscuits (cookies) to be squished together and made into s’mores, the most irrestible end to any campfire evening. Campfires are a national institution here, and are treated as a very important part of being on holiday, so a Fire Ban being lifted, if only for one evening, is something to celebrate. I’ve only had two campfires of my own  since I’ve been here – and both were just to keep warm. One high up in the Rockies, at Kicking Horse Campground, when it was 2 degrees and snow threatened, and the other in the Prairies somewhere, when the wind cut right through me and I just couldn’t warm up. The normal campfires are for the s’mores, the friendly glow and the smoke that deters the mozzies.

A very photo-lite blog today. Much as I love writing this and sharing it with you all, I’m not so keen on standing in the rain, thunder and lightning, getting National Geographic-type shots to illustrate my descriptions. I could show you the gas station where I had lunch, but it’s not all that thrilling. For maybe the third or fourth time on this trip, I pulled up in anticipation of a big jug of my favourite root beer, A&W’s, only to find that the restaurant, with directions from the highway and big signs to tempt you in, was a building site. I asked a guy up a ladder fixing lights outside if I could leave my bike there, and he said “Sure, go ahead, but you know it ‘ain’t open, right?” Once I’d recovered from the shock I asked if he could hurry it up a bit, say, 20 minutes? He said “Well, I’ll do my best. No promises” Oh go on then, let’s have a picture of a Shell Garage: 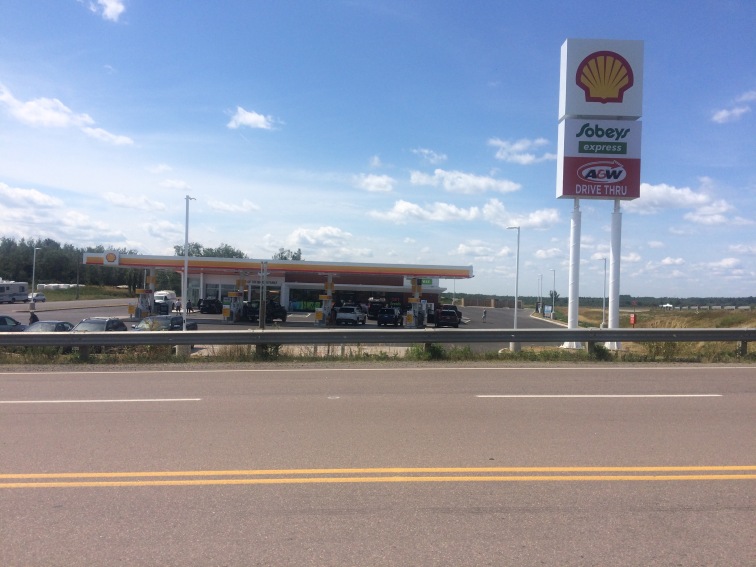 And one last item, just because I like to what I can to keep you all amused and entertained. I’m actually writing this last bit on Saturday morning before posting it, in a McDonalds a few km from the campground, drinking coffee and sort of scanning the local paper, The Telegraph Journal. So here is the only bit that anyone ever really reads, the funnies! First up, my favourite one today all on its own:

I’m not judging the rest, I’m just adding them to the blog and letting them speak for themselves. If you’ve got some time today you could even try the puzzles: 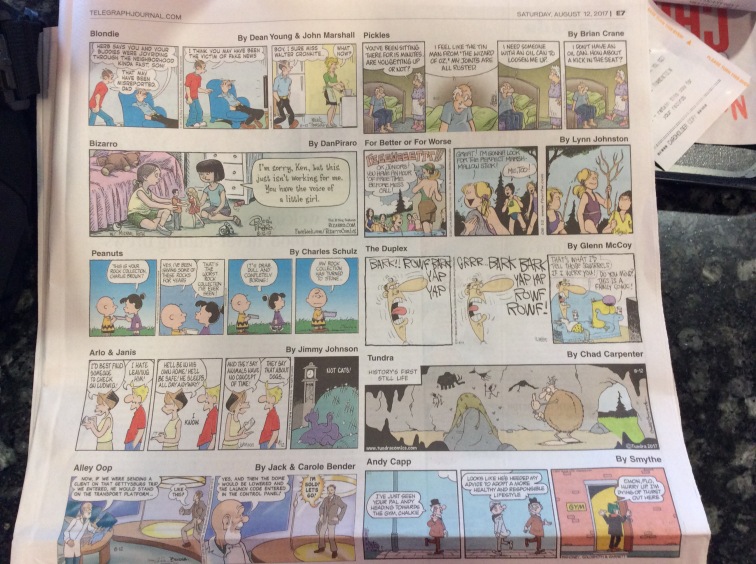 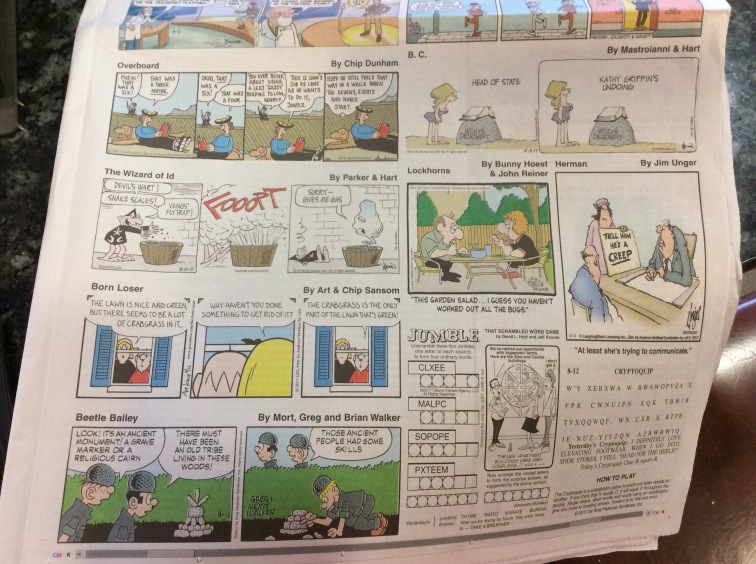 And for all dog-owners, just in case you didn’t spot this little gem tucked away in there…

OK, the drizzle has started, my second coffee cup is empty, and that means it must be time to get moving. I’m off to find the local phenomenon now, as promised, but I’ve heard that it might a bit of a let-down, especially if it’s busy. In this weather, I sort of doubt it. Then I’ll be heading east again to catch my first glimpse of the Atlantic Ocean later this evening. Now that’s a thought to get you motivated.