Day 14 – Kicking Horse , Yoho to Canmore. Today was special to me because it marked the point at which I could say I had cycled right through the Rockies. From my end point today, Canmore, the road goes mostly downhill to my next stop, Calgary. It’s also special because I’m back with my lovely friends Stewart and Gill and I’m claiming my next rest day! Many of today’s photos are not by me – many thanks Stewart (and Dan) for sharing yours.

I had breakfast by my campfire this morning, which restarted immediately after burning all night. The cycling day began straight away with a big climb, like yesterday. It took me up and over Kicking Horse Pass, which I mistakenly thought I’d done yesterday afternoon! On the way up I passed the famous Spiral Tunnels, the engineering marvel that solved the big problem faced by the train route across the pass – the insane gradient.

For many years in the late 1800s it was the steepest rail track on the entire continent, at nearly 5%, like something out of the movie Polar Express (clip). There were many accidents, mainly on the descents, and finally they copied a solution from the Swiss, and created a series of spirals looping in a figure-of-eight to reduce the incline.

The grey bit in the middle is the Trans-Canada, my road all day.The view down over the loops is mostly wooded, but you can see trains snaking their way cautiously up and up and up. I read a board at the spot that said the (mainly) Chinese workers, after a 10-hour day risking their lives for $2.25, would head back to down to the site of my Campground last night to eat and sleep, before getting up at dawn the next day to do it all again. The death rate was awful – one per week. It was one of those Rockies moments when cycling over a beautiful modern road feels a bit less like hard work.

The top of Kicking Horse Pass took me an hour or so of climbing, but didn’t have a proper sign!

Instead I went by the altimeter on my Wahoo – this was officially the highest point I’ve recorded on the trip so far, in fact the highest of my life on a bike:

A quick phone call with Stewart to work out where to meet up (he cycled out of Canmore to meet me and to ride in together) and I was off on an entire day of descending, past Lake Louise, Banff and finally arriving in Canmore. My first chance for a coffee and a bite to eat (I was famished today!) was Lake Louise Village, not the actual lake, which is a steep climb away, but a sort of strip mall of eateries etc. 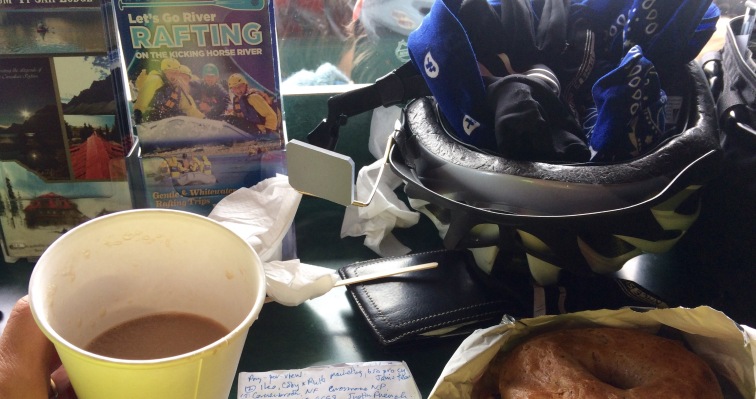 Whilst I sat at the bar I met Justin and his family from Newfoundland. His kids were clearly enjoying the food stop, and we chatted about his home, and his work as a guide in the more remote parts of Newfoundland. I asked him about a decision I had to make for the end of my trip – whether to take a longer or shorter ferry, resulting in a 300-mile + difference in cycling. He made a very good case for seeing more of the island (the setting for E. Annie Proux’s superb book, The Shipping News) and also invited me to stay with them if I did have time to go that way. They were such a great bunch that I’m sorely tempted to make the time if I can. I gave Justin’s son Seth my little red windmill thing which I bought in Dollarama in Vernon (don’t think I’ve mentioned it on the blog), which he seemed happy to have. It was honestly driving me nuts, so I hope it now has a happy new home.

As I sped along one section of highway after Lake Louise I was overtaken and beeped by Craig’s family from yesterday, who pulled over for a chat and to give me a mint! They wishes me luck and checked that the headband they’d donated yesterday was still on the flagpole (it was) then headed off. Just as I was thinking, “mmm, a mint”, I coughed and inadvertently spat it out.

A few minutes later I heard another beep and it was Dan and his family following up! They pulled in at a nearby parking spot, and by the time I got to their SUV Dan had his bike off the back, was in his Lycra and said he’d love to cycle into Banff with me! It really made my day to have such an unexpected bonus ride-partner, and we cycled along bar-to-bar chatting like on a club ride at home. Except for the scenery.

(About to set off)

Dan was very patient and kept to a steady speed. I can shift like anything on a downhill, but hills and headwinds are another matter. It transpired that Dan has achieved superb wins in local Sportives, as well as holding some coveted KOMs (King of the Mountains) on Strava, so “Hat” Dan, as the French say.

We kept in contact with Stewart and took the new cycle path into Banff, which was great, stopping at Vermillion Lakes for a photo, with Mount Rundle in the background. (My son Jacob and his mate Arthur have an alter-ego band-within-a-band they called Vermillion. They’ve written so many really weird numbers under that name that they almost really exist). Dan lives in Calgary but regularly comes up here for skiing in the winter, and weekends like this of family-time away from the job in the summer months. He’s a geologist by trade, but has that unmistakeable cycling fixation with taking on big rides and races, and I’m sure it won’t be long before he’s joined by his kids on some memorable cycling holidays. 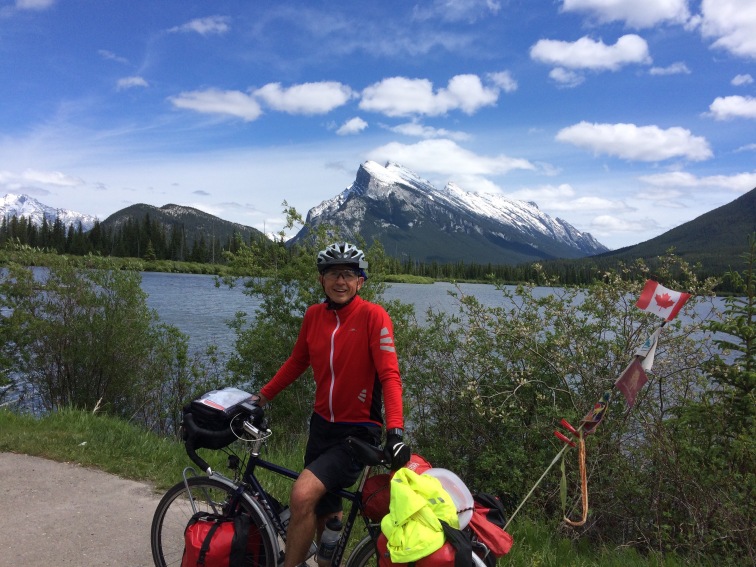 We phoned Stewart from here, to find that he was above our head, up on the highway. We met up (so good to see Stewart again after all these days in the mountains) then rode the remaining short distance into Banff together, stopping for a coffee and cookie at the Wild Flower cafe, Stewart’s recommendation. 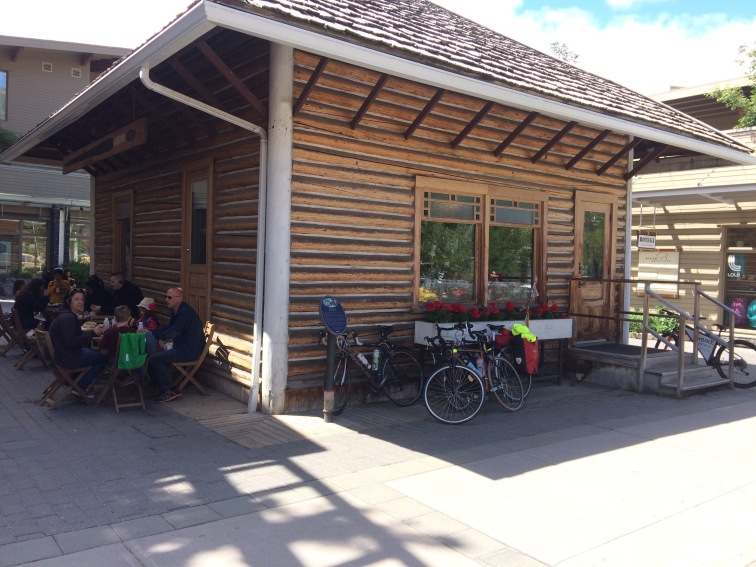 You’ll have noticed that the sun was properly out by now, and we were basking in it after a cold few days. Warming up on your bike is a great feeling, dispelling any memory of the cold, however chilled you may have been. Dan then set off to meet up for lunch with his family, and I was very grateful to him for taking the time to ride in like that. I bet his kids thought it was a great adventure. “Where’s daddy going mummy?”. Have a great summer all of you! Here’s a link to a new Strava feature that Dan has got his head round, called Relive. Try clicking for an overhead virtual view of our ride from his SUV as far as Banff: https://www.relive.cc/view/1032337293  (It looks great, so do let me know if it works, or doesn’t. I may use it in future for this trip)

The rest of the ride was all in sun, all downhill, with yet more staggering mountain views. Stewart has climbed or hiked many of these peaks, and painted many others, so has that familiarity with the personality and terrain of each one that comes with close-up experience. I started to see them as groups, or ranges, or even individuals, which when I’m on my own isn’t really possible. There’s just too much! (ps I’m suddenly in all the photos, sorry). That’s Cascade Mountain in the background:

After stopping briefly to chat to a very friendly Czech couple who had found the best Adirondack chair rest spot ever (their view is behind me in the one above)….. 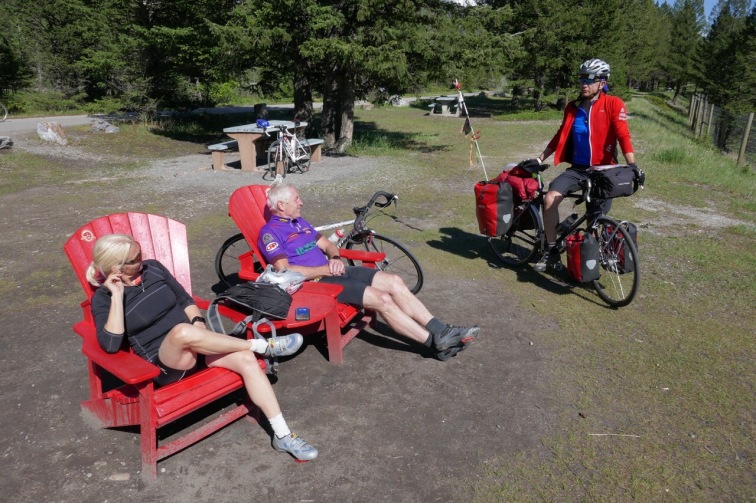 …we had the good fortune to see an Osprey, feasting enthusiastically on a fish on top of a telegraph pole, with Big Sister of the famous Three Sisters mountains in the background. It’s so nice to have proper camera on hand to capture these moments. It makes me wonder whether the extra weight and hassle of another machine might have been worth it. For now I think I’ll stick with the advantages of the iphone, but it will never take a shot like these two:

The cycle path is absolutely superb on the stretch into Canmore, full of bends and turns through wooded areas as well as the massive views. One roller-coaster section was such fun that I had to go back and ride it again:​

​So now I’m in Canmore, where Gill had prepared a sumptuous meal of Thai chicken, and we caught up and drank beers and wine and I had that great feeling of having finished the bulk of the mountains, a rest day tomorrow, and so many images in my head and memories of the last 10 days, that I don’t think I’ll ever forget my first Rocky Mountain bike ride.

This wasn’t really a day of funny signs, except for the one I spotted at the campsite this morning (see, there’s always one). It’s the translation of the time that made me laugh, as if a francophone would stare at 1pm and think “Mon dieu, q’est que c’est?” 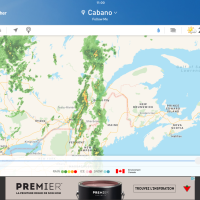