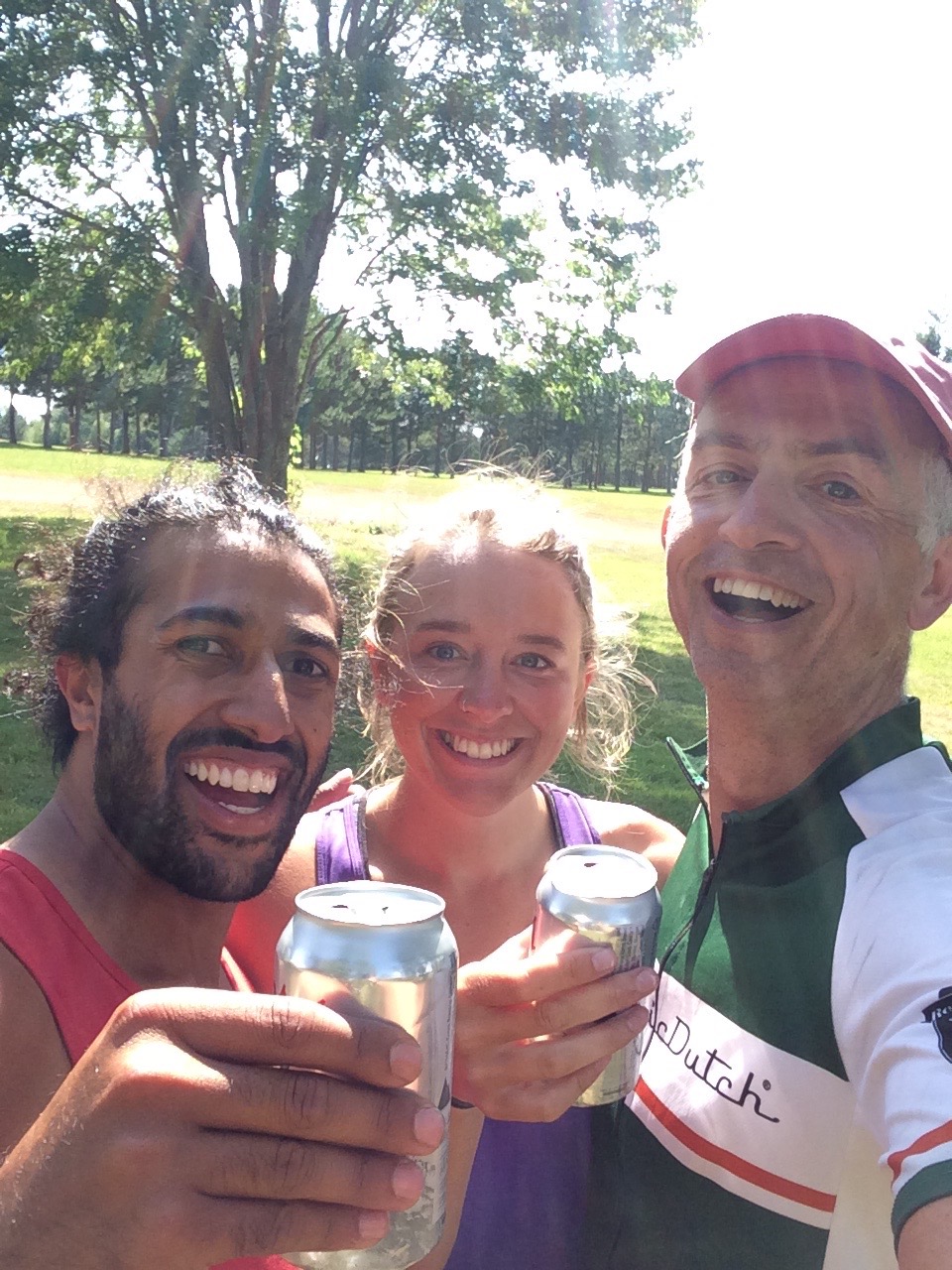 Day 73 – In which I somehow managed to meet up, again, with the Calgary Two, aka Kaitlin and Naheer!

Sorry Stats fans – I’ve walked all the way up to the camp office but left my stats-maker behind. Let’s call it 100km, a few hours, pretty warm, pretty flat, average calories, quite a long coffee stop, ok?

I sat in the hotel lobby this morning doing some route-checking, and the guy sitting opposite me was on the phone and having no luck at all in finding a rental car for his week working in Fredericton. He was getting more and more annoyed about it (I’ve had to tone this conversation down by about 95%). He was looking straight at me as he spoke, which was a bit disturbing:

“I just need to rent a car, one car, all I want is one miserable car. What’s wrong with this place?”

(I was about to sympathise but I then realised that he was talking to someone, not sharing his problem with me)

Then, as I got on my bike outside the main entrance, a couple got out of a taxi. The guy proceeded to give me a running commentary on everything he saw (I should mention that I was wearing my ‘Republic Dutch’ cycle shirt , from a shop in Utrecht owned by a guy I know, Amyn, not FotB Amyn):

At this point I decided to be a non-English-speaking Dutch cyclist, and pretended I had no idea what he was talking about.

My plan today was pretty simple – a lazy breakfast at my motel, which I had booked online for a bargain (and included free breakfast) :

(I know what you’re thinking, where’s the coffee? Don’t worry, I was holding it in my other hand, panic over. Interesting Melatonin article in today’s Fredericton Gleaner, who’s offices are next door to the hotel, although one thing I don’t need at the moment is help sleeping)

…followed by some shopping for essentials in what Susie always calls Shruggers Drop Mart, and then cycling 100km or so to the only campground spot between Fredericton and the next campground along in Moncton, which would be a mega-ride. I’m no longer in the market for mega-rides, and prioritise a nice early finish that gives me plenty of time to enjoy the great weather and to relax at the campground before an earlyish night and an episode or two of the series I’ve downloaded on Amazon, Patriot. Previously, it was Goliath (which I highly recommend. Patriot is a bit more so-so, or “Meh”, as my kids say).

Anyway, that’s pretty much how the day turned out, with one very notable and welcome surprise. As I pulled in to my 50km first stop of the day, I heard a familiar voice shout out “Ben!”, and there at the picnic table were Naheer and Kaitlin, enjoying their coffee and cookies in the sun. It was so good to see them again in such an unexpected spot. We sat drinking a few more coffees together and talking at length about how we’ve been doing on our different trips, physically and, more interestingly, psychologically. We found that we had reacted to these later sages of the mammoth journey in a similar way; despite being fitter and stronger from all the riding, and able to cover big distances if needed, we prefer not to push ourselves over into any kind of red zone, and to get as much pleasure as possible out of each day. We thought that perhaps we felt we’ve proved something to ourselves by just getting this far, and that the pay-off is to try to make life as easy as possible, given the circumstances.

The next 50km (sorry Kaitlin, 47km. Kaitlin is incredibly good at research before each day on the road, and remembers distances and campground locations like a proper tour guide) were spent cycling in the sun with a beautiful (no other word for it) tail wind and sharing stories and plans from our journeys.

Whilst we were talking a thought suddenly occurred to me.

“Do you ever bump into any other cyclists you’ve met like this?” They said they never did. “And do you find that you only hear about other riders having been where you have, but never see them?” They said that they found exactly the same thing. “Have you seen the Sixth Sense?”. I’d said before that I thought possibly the phantom cyclists we never met were just that, phantom spectres, but what if……what if we were the phantoms, and only saw each other? What if we were destined to travel the continent in perpetuity, only going from West to East (like the cyclist in Jacob’s day in the Prairies running my Blog – “Hopesack to Manatee Island”) and only ever meeting each other? We’d be the last to know. Can someone please confirm that I do exist? It’s been a while out here, you know.

We celebrated our mutual haunting by having a beer together at the lovely campground, the alarmingly named T.N.T Campground (Tents and Trailers). But not just any beer. As usual the office didn’t sell beer. I asked the woman on the desk, who turned out to be the owner’s daughter, if she knew anyone who could sell us a beer. “Hmmm – I can speak to my Dad” And low and behold, shortly afterwards we were greeted from a large white pickup truck by Dave, brandishing four ice cold beers which were the kindest gift that you could ever give a hot cyclist. Kaitlin has proposed a project where we buy lots of beers, put them in a cooler in a van, and drive around nice campgrounds in Canada handing them out to cyclists. I think that there are worse things you could do with your time. 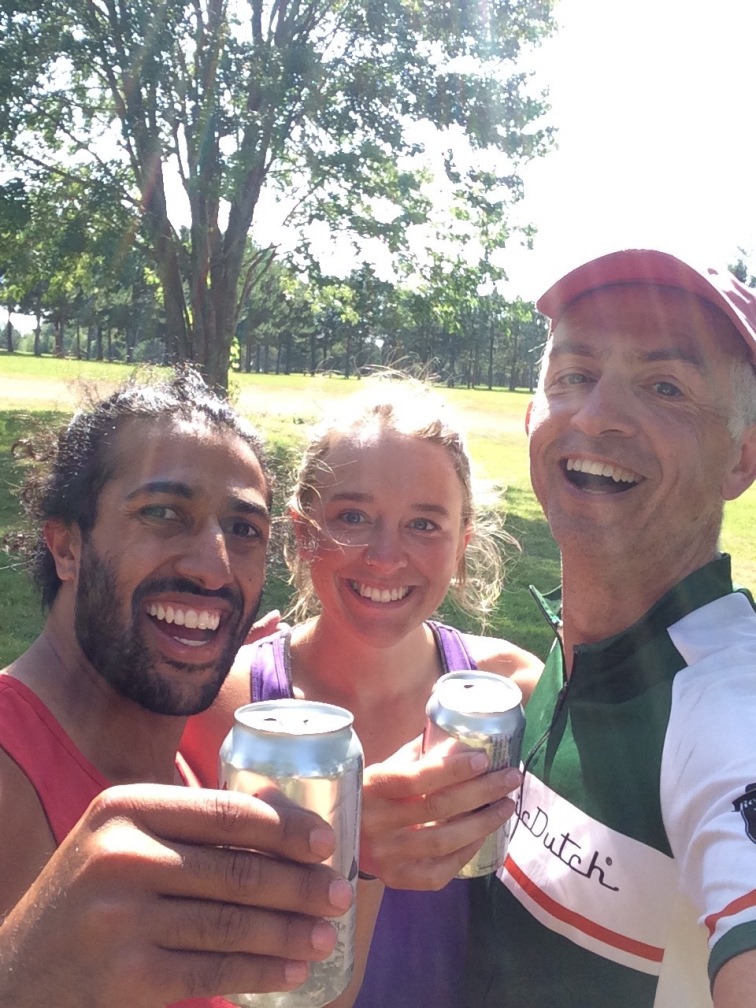 Talking of which….I’ve promised FotB David Candlin, currently in the depths of Africa, in Cameroon, at least a lifetime’s supply of Minstrels for his fabulous response to my “How many trees are there in Canada?” question yesterday. With no more ado, here’s David’s whole comment in full:

“OK, I can’t resist your question yesterday about the number of trees in Canada – it’s the kind of question you get thrown at you in management consulting interviews to test logic!

The rest of the interview is spent ripping the answer to shreds!”

I regret now that I mentioned the lack of bees, and particularly wasps, in yesterday’s blog. The wasp guys obviously heard about it, checked on my blog where I was likely to be tonight, and made a bee-line (ha!) for it. There’s one on my wrist right now. Hang on. Missed it.

Little story for you – I recently sat next to Duncan Riddel, who was guest leading his old orchestra, the Bournemouth Symphony Orchestra (Hi BSO, if anyone’s still out there. I heard your prom was great!) We were playing the Wasps Overture, by Vaughan-Williams, which starts with a loud unison octave note on the violins. He turned to me, as the rehearsal briefly stopped almost immediately, and said, typically deadpan, “It’s called the Wasps Overture, but it starts with a B”. If anyone hears me make that gag, you’ve rumbled me. When someone said to Oscar Wilde “I wish I’d said that!”, he replied “You will”

I also realised as I cycled the first stretch this morning that I was due a day off tomorrow, and I gladly accept the offer. This campground is right by a river, spacious and peaceful, and I’m going to be doing a lot of absolutely nothing here for the next 36 hours or so. The Calgary Two push on to Moncton, but my psychic sense tells me we shall meet again.

I always get my hopes up when I see this, but they’re always dashed. I can see that there’ll be fuel, there will be the chance to hold a small jar in your hand, some Minstrels, a campground, a bed and breakfast, but always a mystery service, “?”. What will it be? But it’s always the same, tourist info. Life can be so disappointing.

23 thoughts on “Day 73 – Fredericton to Coles Island, and another reunion!” 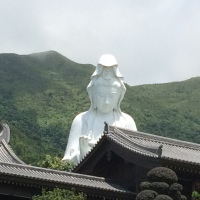