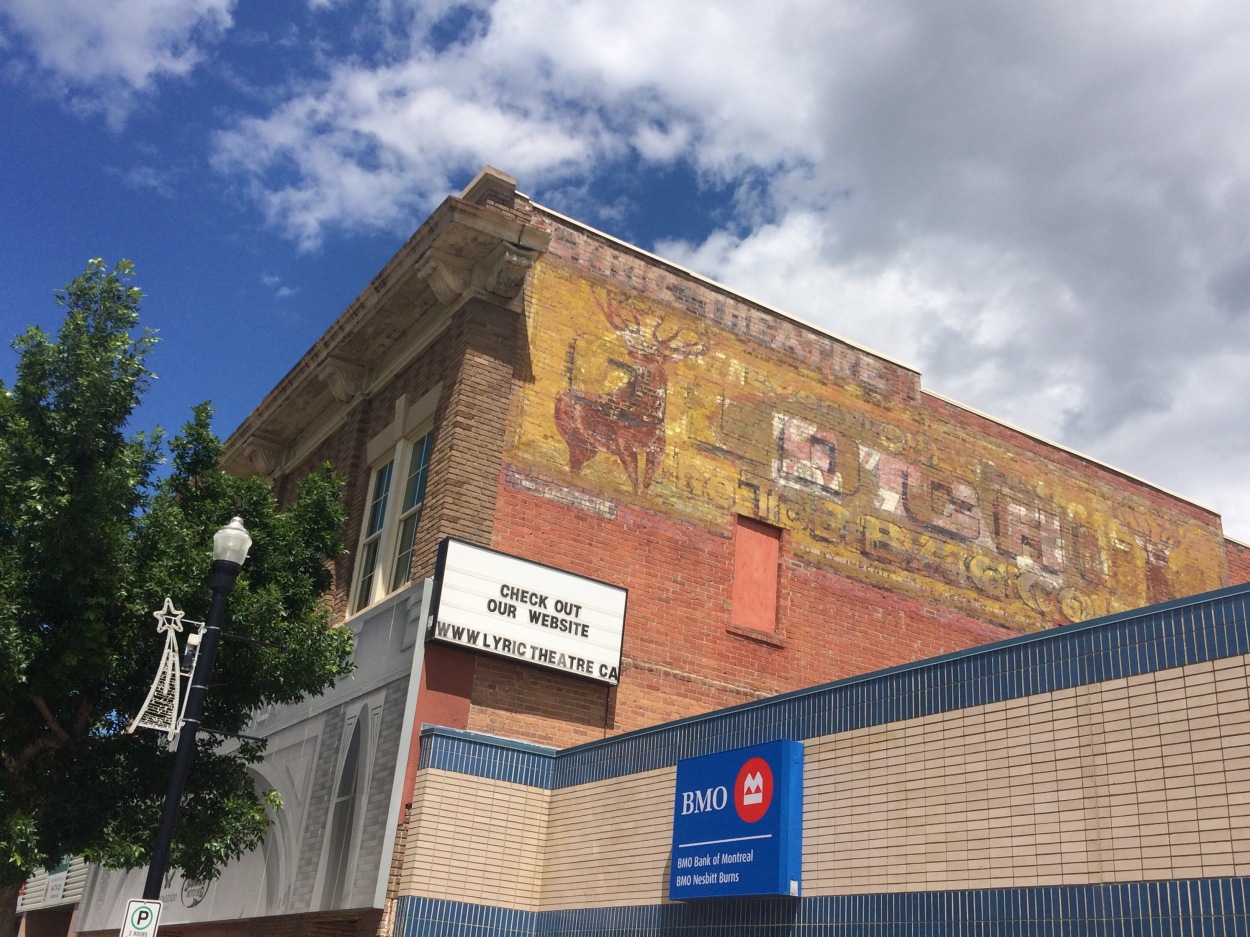 Day 20 – Gull Lake to Swift Current. A much shorter day, made just that bit longer by an unexpected shift in the wind, hitting any poor cyclists hard from the left and messing with your mind and your steering. I think I’ve been spoilt by the following winds of the last few days.

I set out from Gull Lake after saying goodbye to the Calgary Three (Naheer, Kaitlin and Mark, all now correctly spelled!). We made an outline plan to meet up again if we all stopped in Swift Current, not yet realising that the wind was in charge today, and that Swift Current was as far as anyone was going to get without hidden motors in their bikes. Heaven help us all the day the wind is genuinely a headwind – I can’t imagine making any miles at all. The wisdom of travelling west-east is proven daily. The first stretch of road, totally exposed as always in this amazing part of the world, blew me all over the place and made me cut tens of miles off my target distance. After an hour I found myself thinking how much easier it would have been if we’d been the Calgary Four and ridden “through and off” together to mitigate the effort of fighting the wind. I started doing my slightly weird-looking “tacking”, where I use the entire hard shoulder, starting on the left, to let the wind push me slowly over to the far right, before slewing back across to the left and starting all over again. It works for three reasons:

2. You’re not fighting the wind all the time

3. Time passes more quickly when you have a plan. Just ask “Ernst” Shackleton, who abhorred an idle hand in adversity.

The following picture could equally be my Sign That Is Funny, but it goes here because it appeared just as my efforts against the wind ran out of puff!

At this point I’m also putting a picture in to illustrate the difficulty of capturing even one hundredth of what you see as you cycle. I’m introducing a new section today, entitled “NFC”, or “Normal For Canada”, and I wanted the first entry to be a type of truck I’ve seen several times. This picture (which looks as if I’m in studio, superimposed on a screen behind) is my attempt to finally get proof of their existence! Zoom in on the opposite lane and you might make out a fuzzy truck-like form: 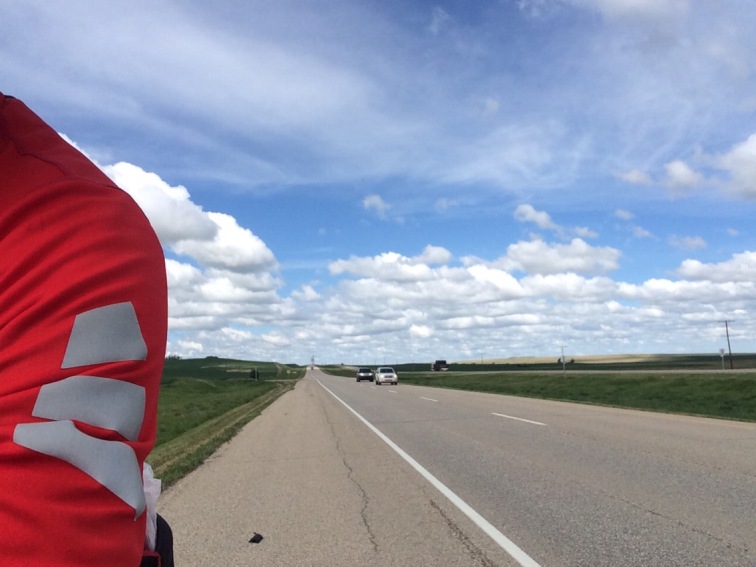 So this is my Normal For Canada for today. These giant-sized flatbed trucks go by, carrying just tyres, piled double. How many do you think are on board? Despite being incredibly long vehicles, they can only carry 4 of these tyres. THEY ARE HUGE! I’m hoping not to run in to the vehicles that use them.

Arriving at Swift Current I checked out a campsite almost in the middle of town. It wasn’t the plan to stop here but avoided any more highway miles, Despite starting to set up, I suddenly changed my mind, getting that indescribable feeling that I would not enjoy two nights here. The others were planning to head on to Moose Jaw tomorrow so were happy to be out of town. I decided to join them after paying a visit to downtown Swift Current first. It was a Saturday and there was a Farmers’ Market plus live music in Central Square. I really liked hanging around in a small town like this, full of interesting sights and a well represented Mennonite Community, and the sign of one or two fine old buildings mostly remodelled to be virtually invisible. 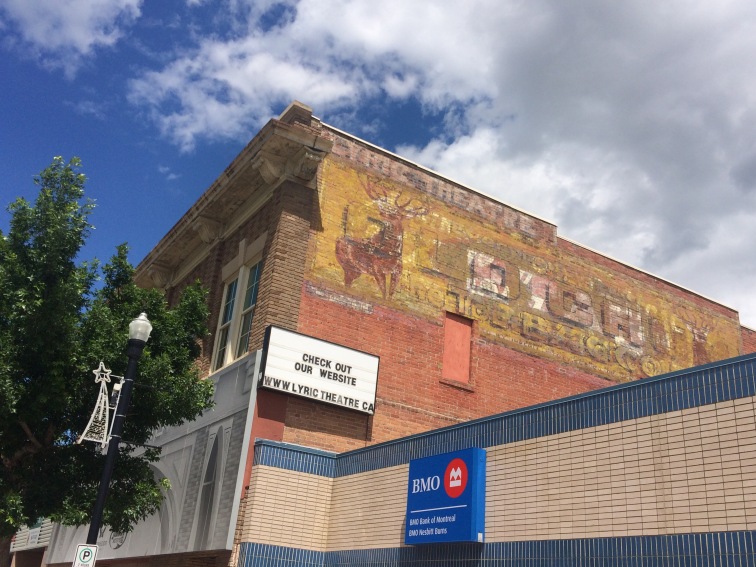 I got some Chinese street food for lunch – Jacob, bubble tea!! – then made for the coolest coffee shop in town, Urban Ground. I knew that if I waited long enough, the Calgary Three would come.

Of course they showed up after only about an hour – there is a coffee-finding instinct in every cyclist. It’s infallible and brooks no obstacle. Their smiling faces were a very welcome sight, and we stayed for a while chatting and kind of planning our various routes. Before they arrived, I met Kathy, the mother of the cafe’s owner, who was absolutely charming and very interested in my trip and my impressions of the local band’s cycling song I’d heard, “My Two Wheels” written by band member Dave Cyca (on Spotify apparently). All the band were keen cyclists and had taken part in a big 180km circular ride the previous weekend. I’m not sure if the song was inspired by this event, but it reminded me of a song written by Whinlatter (FsOTB Jacob Buckton and Arthur Sawyer, and Ryan Isbel), inspired by FOTB John Mills, who challenged them at Susie and my joint 50th Birthday party to write a song on the spot called “I Ran Over My Banjo WIth My Combine Harvester”. Typical of them , the song was a thing of good–natured beauty. Kathy then invited me to stay that night at the house she and her husband had up above town “and there”s a hot tub!!” I would have accepted like a shot, but the camping peloton must be honoured and I felt that four of us might have tested even Saskatchewan hospitality. Once they turned up, the Calgary Three were outraged. – “A hot tub??” exclaimed Naheer. “Maaan!!!??” To make up for this, I tried to distract them with an explanation of my Get Rid Of Something Every Day game, offering an almond that I found in my handlebar bag as my ante. 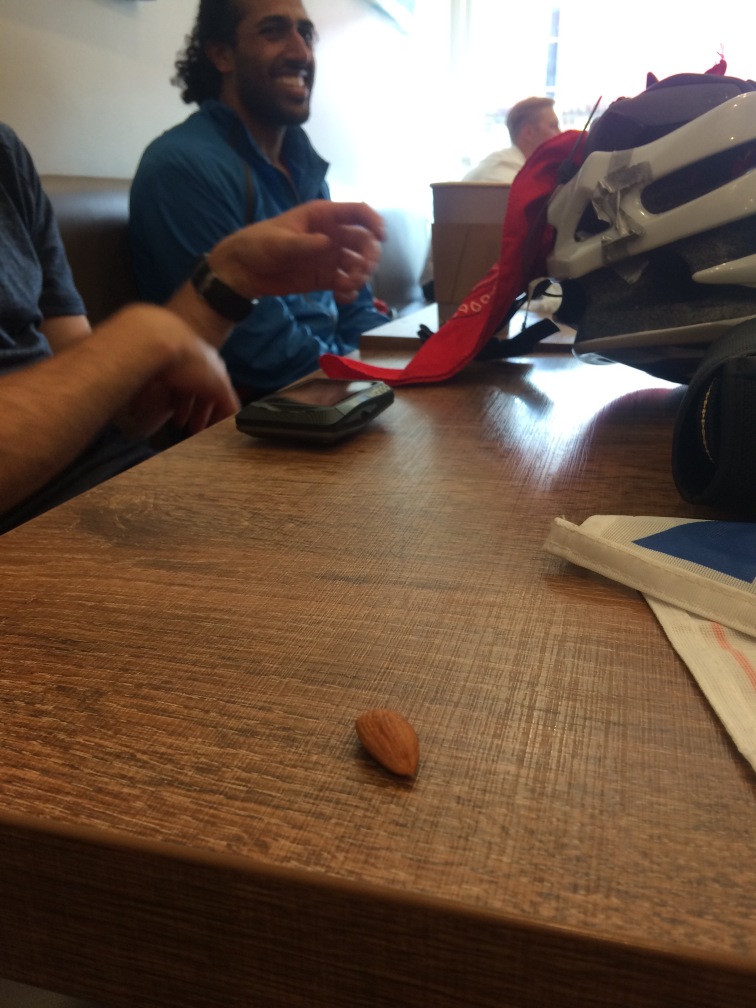 Then we loaded up our bikes again and set out for the Ponderosa Campground just out of town, Mark’s excellent research finding. It was lovely spot, friendly, free showers, and we pitched beside two lady-cyclists from Kelowna (an earlier stop of mine at FsOTB Brant & Dagmar’s – hi again B&D!). We celebrated this camping reunion with warm beers from last night and a few bags of dehydrated food  perhaps more suited to climbing the Eiger than a sunny evening in Saskatchewan. I always feel I should be eating steak around here – sorry veggies! (BTW, the wifi code outside a meat dealers in Golden the other day was “deathtoallvegans”. I said “You’re joking?” and he said, frowning, “Nope. All lower case”. I went without wifi as my wimpy protest)

They were planning to leave for Moose Jaw early in the morning to meet up with friends, whilst I had….A FREE DAY! Despite enjoying the cycling hugely, I can’t tell you how nice it is to stay put and recharge the batteries, literal and figurative. We said goodbyes and turned in, knowing that we’ll probably meet up again at some point soon – maybe for the Sesqucentennial celebrations on July 1st?

I’m quite proud of one Strava (a kind of cyclists’ Facebook, for anyone unclear) statistic at the moment. You can sign up to challenges each month to compare your achievements with the nation, and I’m normally languishing around 58,000th. For distance this month, however, I’ve climbed into the big league. I fully expect a professional contract to be on the table shortly.

One last thought, from the book I’m re-reading (Pirsig’s Zen & The Art of Motorcycle Maintenance), that felt apposite and that I find moving:

“…What I would like to do is use the time that is coming now to talk about some things that have come to mind. We’re in such a hurry most of the time we never get much chance to talk. The result is a kind of endless day-to-day shallowness, a monotony that leaves a person wondering where all the time went and sorry that it’s all gone…”

This manner of speaking, rhythmic and quite mesmerising, reminds me of the beautiful prose/poem by James Agee that Samuel Barber’s “Knoxville: Summer of 1915” is based on.

“…We are talking now of summer evenings in Knoxville, Tennessee in the time that I lived there so successfully disguised to myself as a child…”

So one final link – the beautiful and haunting music of Knoxville to send us all away in a summery reverie.