Day 19 – Medicine Hat to Gull Lake. After two days of cycling 100 miles-+ per day, I decided as I fell asleep last night to take it easier today and stop earlier in the day. But then I woke up, heard the wind blowing in strongly from the west, and thought “nah…lets do one more century!”

I took quite a while to get properly moving today. First it was emailing etc, then I stopped at a huge retail park to shop for food. As I approached the turn-off, I saw this deer in front of the sign looking for all the world like it was making a shopping decision – “Sobeys first, or a quick root beer? Decisions, de-cisions…whassat???”

All morning I kept thinking about a funny event that happened at the campground last night. The evenings are long and sunny at the moment as we approach the longest day of the year, and the site was full of kids making the most of it, playing hide-and-seek  in a big group all over the place with shouts from mums and dads from time to time. I was in the washroom brushing my teeth, when a little lad of about 3 or 4 came in, walked up to me and announced with a big smile (verbatim): “I’n hidin in hidin seek!”. “Are you?” I replied. “OK”. So he looked around the room, completely empty except for one large toilet cubicle, and wisely chose it to hide in, closing the door without locking it. I carried on brushing my teeth and could hear all the other kids outside looking for hiding places. “I’n goin to the toilet!” the lad suddenly announced. “OK!” I replied, laughing. A few moments later in came a couple more lads the same age, who both went straight to the cubicle to hide, laughing and shouting. “SSSSSSHhhh!” one of them said. Then a couple more arrived, until I think the whole gang was in there. I heard a dad outside shout “5 more minutes guys!”, followed by the sound of the toilet flushing and an outbreak of uproarious laughter from all the kids. I packed up my stuff and left, telling the dad that I thought they’d be on their way out shortly.

After an hour or so of cycling I crossed the border into my third Province so far, Saskatchewan. The only noticeable change at first was that the hard shoulder started to drop in quality, gradually at first, then progressively deteriorating until by the end of the day it felt like concrete slabs joined together with rubble. I was riding through an area called Cypress Hills, which extends a long was south beneath my route, and a bit north. They are beautiful, gentle, rolling hills, grass covered and mostly deserted. 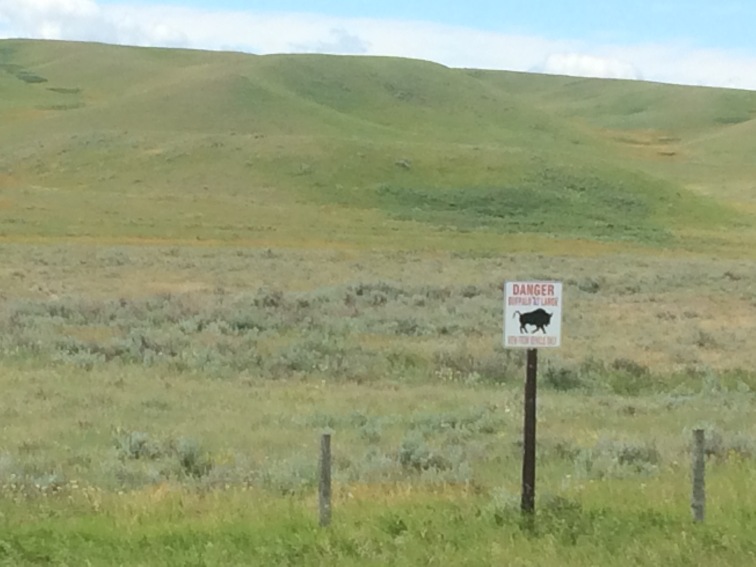 Grass grows right up to the edge of the shoulder, where countless ground squirrels or gophers (not sure which) make their living, running in and out of burrows set a little further back. They always run in and out the same way, making clear paths through the grass, which must be a big help for the hungry eagles that circle the skies looking for lunch or a second breakfast. Of course the gophers are hungry too, which leads to some disturbing behaviour: the highway is littered with dead gophers hit by cars (and maybe bikes, though I’ve managed to dodge them so far), and this morning I saw a live one drag a dead one off the road, through the grass, and into its burrough. I don’t think it was for sentimental reasons.

I met a fellow long distant cyclist on the road this morning, Hans, who is a 73-year-old German living in Reno, Nevada. He was an extraordinary man, a very tall chap, cycling along on a cheap supermarket bike, all his possessions wrapped in one plastic bag on the back. I asked how he started out on a bike, and he told me that his mother, in Eastern Prussia in 1944, put him on the back of a bicycle as a baby and set off to escape the advancing Russians, of whom they were all terrified. His family settled in Munich after the war, but he had lived all over North America since, Labrador, Newfoundland, Quebec, Alaska, and now Nevada, always cycling and also kayaking great distances when his job allowed (he was a masseur/therapist with the Canadian Air Force for many years). He said he had cycled around the world several times, always on his own. His wife waited patiently back home, wherever that was.

(You’d better get used my emulsion-face – I’ve more or less stopped trying to wipe it away. I need all the protection I can get!) 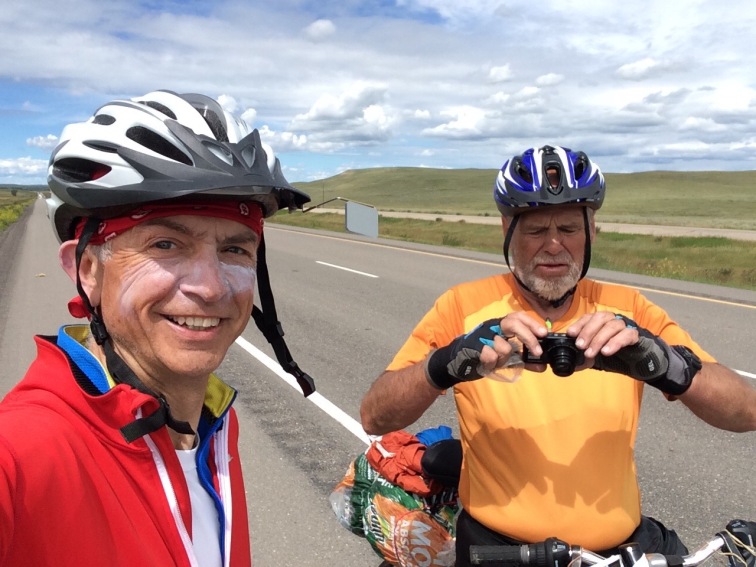 I was surprised, given all this, that he was suffering very badly with saddle sores and didn’t seem too sure what to do about it. I’d noticed he was riding very awkwardly, stopping often to take the weight off. I told him I had some cream that would help heal it, and he seemed suddenly very interested in me and my bike’s contents. We stopped, and as I dug out the pot I noticed that he had an awful saddle with a big gel cover, the worst possible combination for long distances (the close-fit to your backside creates lots of small bits of friction. Harder surfaces are much more forgiving, oddly). I told him this, which surprised him no end, then he took advantage of my offering with great interest. I’d been cycling alongside him for several miles, but felt I needed to push on a bit to make Gull Lake, so we said our goodbyes, promising to look out for each other. He had absolutely no plan whatsoever, no map, no idea of where he’d stop next. He was crossing Canada too but seemed amused by my questions about his route or intentions. We discovered we had something in common however – for some reason I asked him who his hero was, and he thought for a long moment, then said “Ernst (sic) Shackleton”. Any of my family will be able to guess just how happy that made me. I shouted out “Shackleton!!”, and we shook hands across the handlebars, both smiling like idiots. I may have to ask this question more often.

At a service station stop I discovered a milkshake machine that took your frozen cupfull and turned it into cycling manna from heaven. I would have stayed drinking these all day if I had time:

The small lakes by the road are a feature here, very pretty and pulsating with bird life. They often look haunted, since there are trees standing in the water that have died. I’m not sure what sequence of events causes this, perhaps temporary flooding, but it can look pretty strange.

I had several more cow-encounters, where the whole herd stop what they’re doing to come and check out this freak of nature with a long flagpole-tail. This lot were up for a race as I left, trundling alongside me for a few hundred feet.

I pressed on to Gull Lake, and a great campsite in the middle of this tiny town. As I rode in I had the very welcome sight of Nahir, Caitlin and Mark, the three cyclists from yesterday, who were just setting up tents themselves. We shouted hellos and I pitched my tent next to theirs. After a quick trip to the liquor store to get some ice-cold beers (they had already made this vital trip) we all cooked, ate, drank beers and wine, chatted about our various experiences and plans, and just had a lovely evening. They have all quit their jobs to make this trip, Mark (another Geologist!) from an outward bounds store, Naheer & Caitlin from their charitable jobs working with Autistic kids, some of whom were over 200lbs and required a lot of handling. It sounded like they wanted to return to it after reaching Newfoundland (they plan to buy a van and drive home!). Mark is only doing a shorter part of the trip but has no intention of returning to his job! 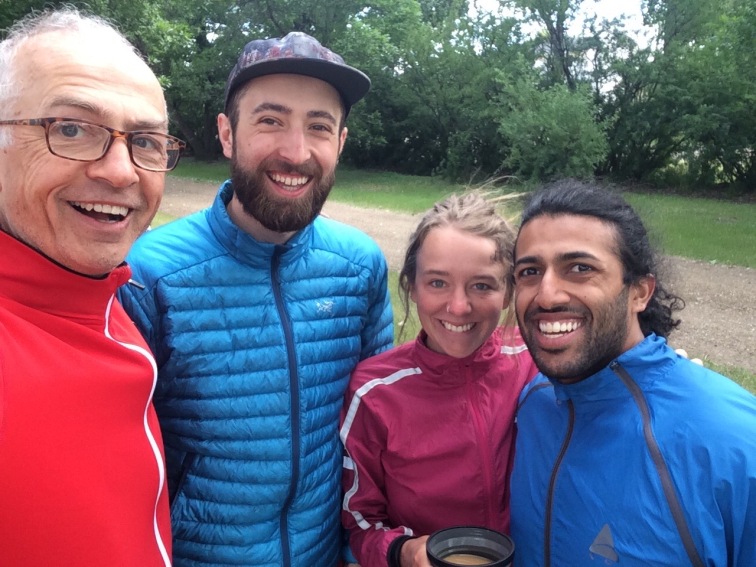 And today there’s a special musical link, from the inexhaustible FOTB Ben Dawson – the most charming thing you could ever waste a few minutes listening to:

Let’s fill the world with this music.