Day 39 – Marathon to Wawa. A day that started with three of us riding together in chilly morning mists, ended with just me again, after a long and arduous day in the hot sun, riding in more chilly evening mists.

We had decided last night to make an early start as the mileage count for today was going to be high, with Wawa as our planned destination. We packed up in the cold and damp and followed Kaitlin’s directions to the nearest cafe which opened for breakfast at 6.30am. Yes, that’s a tank, but we’re not sure why. 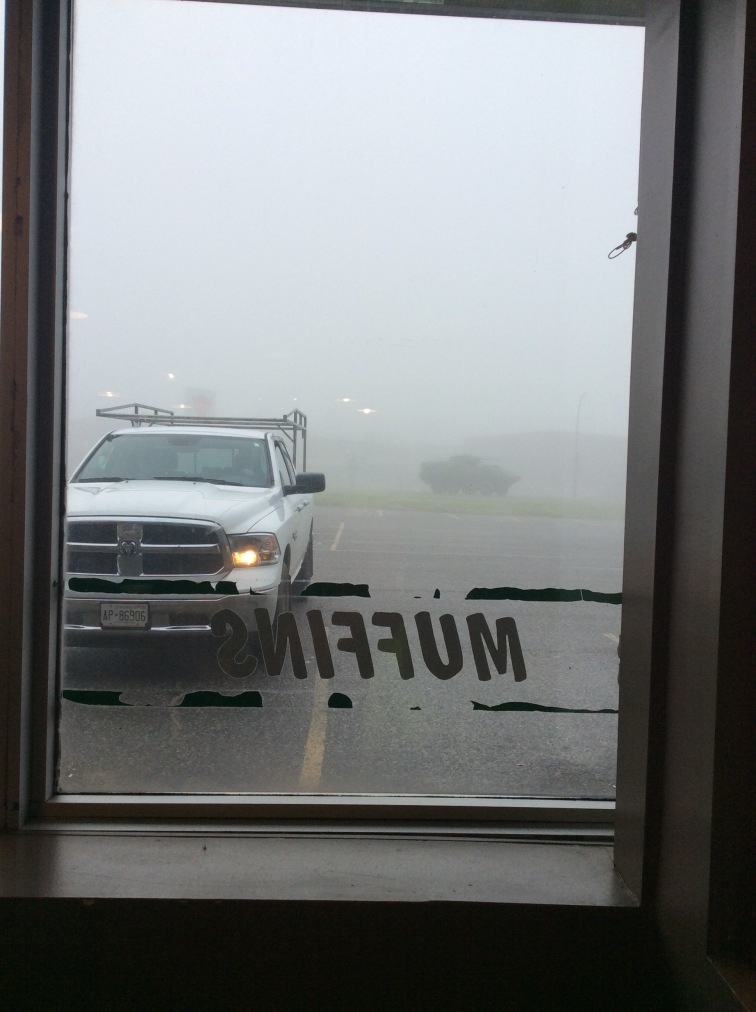 After stopping to add air to my tyres and adjust my brakes, which I’d been meaning to do for days, I ended up cycling off the back for the morning, and came across some geologists tapping away at just one of those countless highway cuttings through rock that I mentioned the other day. I spoke to Matt who was a student working on assessing the mineral content and quality of the exposed rock-face. He told me that the recently blasted areas were best, as the minerals hadn’t been eroded by the elements yet. He was showing guests from Ottawa University around his patch. No fossil record, he told me, as these were igneous rocks made from cooling magma.

Rock Geologists not in view!

At another misty river crossing I saw a new bridge being built that promises to be a lot of fun to cross once it’s open. You’ll need good speed on the approach. 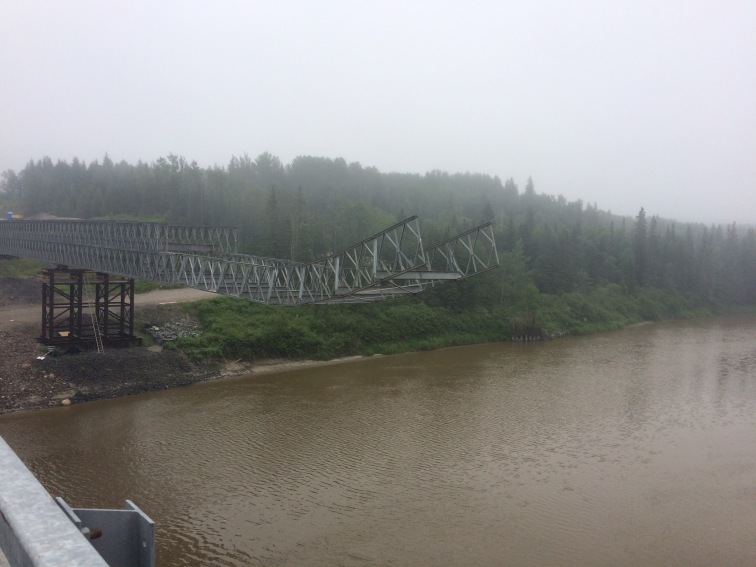 The sun burnt off the mist and the road was quiet, going past several large lakes and crossing many rivers, mostly called “White” something, occasionally “West White” something.

I’d quickly realised that I had forgotten to refill my bottles, a cardinal sin, so at the first opportunity I pulled in at a motel. I was delighted to find air conditioning inside, and just stood there enjoying the cool. “Nice to have aircon!” I said to the woman owner. “We don’t have aircon! Everyone thinks that. It’s just a well designed building”. It was all wood, huge logs from BC forming pillars holding a high roof, with a deep cool veranda outside. The place was deserted but the woman was very helpful, and said “Want to try our new milkshake machine?”. Their place had burned down three years previously and they were only now getting back up and running. Of course I said yes, and one delicious ice cold vanilla shake later I set off again.

We finally all got back together many miles later at White River, a typical collection of gas stations, motels and restaurants, which claims to be the birthplace of none other than Winnie the Pooh 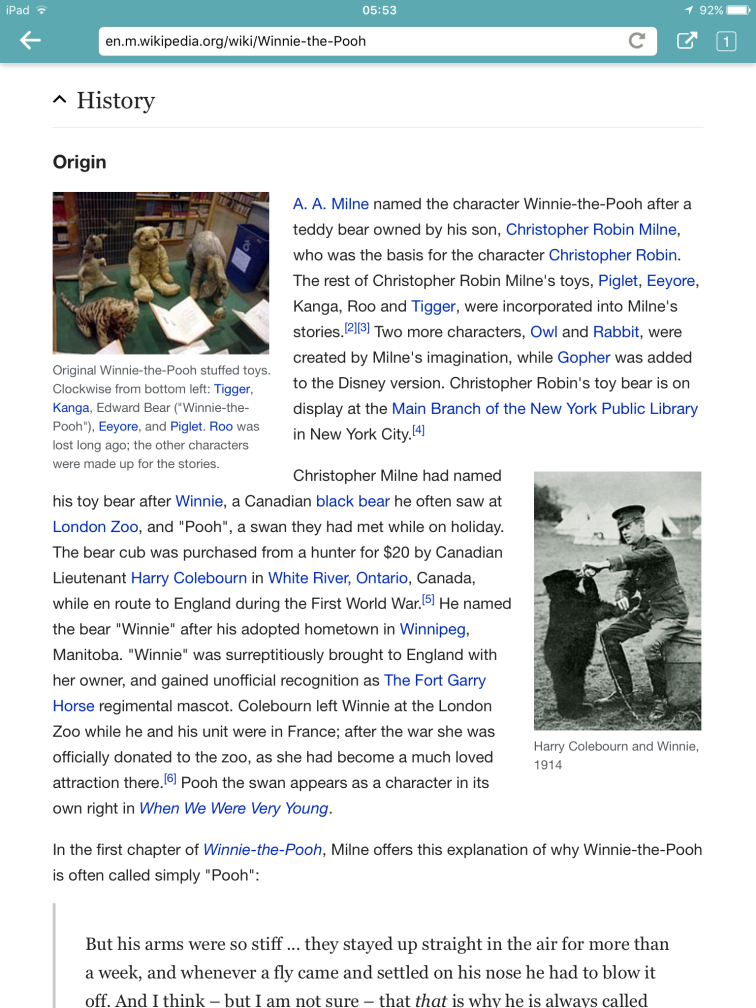 Over lunch in a nice air conditioned diner Kaitlin and Naheer decided that they’d call it a day today after all the miles and heat and find a room in town, which did not prove easy. I’d been feeling pretty reasonable all morning so decided to press on as planned to Wawa, another 90+ km. So it was “goodbye” to the Calgary Two after many happy miles together, but we’re planning and expecting to meet up again (maybe right at the end on Newfoundland for a bottle of champagne, if not before).

Yesterday I said that Hope and Marathon lived up to their names. As my journey unfolded, so did Wawa 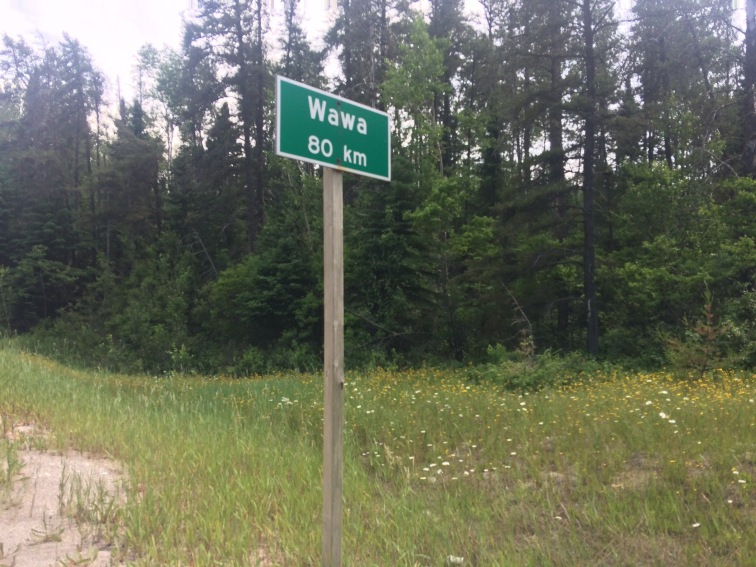 What was supposed to be a longish descent there, wasn’t. It turned out to be pretty similar to the long first half of the day, and just when I was beginning to think my energy wouldn’t last the last 20km, three things happened: the bright sun became a cold mist, the wind picked up and blew hard in my face, and the entire road surface had been ripped off all the way to Wawa leaving assorted cycle-horrors (Calgary Two, be ready for it! Rumble surface first, then loose gravel and sand for ages).

In Wawa, 2km off the highway, I’d decided to abandon camping as it was so late and chilly, but found that every motel was full, with many cars driving to each motel with the same problem, so I cruised wearily right through town towards my last hope, the large, ancient-looking Lakeview Hotel right at the far end of Main Street. “Dump” I thought, vowing to take a room anyway (after all, I’ve stayed at the Norfolk Hotel, Birmingham). With help from very friendly people in what turned out to be a lovely large bar, I tracked down Amber having a sneaky cigarette outside. She apologised for not having any rooms but said “You give me five minutes on the phone darlin and let’s see what I can do. Wanna drink?” I said I’d have what he’s having, pointing to a large IPA. “You got it”. The pint appeared and in minutes she’d found me a room at a motel further along the highway, in the right direction for tomorrow. “Better be quick, they’re going fast”, so I booked it on the phone, picked up some food from Tim Horton’s and rode the final 4km east, only stopping to share this view of a gigantic goose with you:

When I finally got to the only motel in town with a room left (it was pretty obvious why!) I found that I was booked in as “Buck Torn”, and would like to be known as that hereafter, thank you. There was a large queue of weary travellers hoping to get in, but I’d booked the last room. The owner saw my bike and shouted (thick Russo-Canadian accent) : “Buck! I got you, you’re ok, all booked. Ok Buck?”

I don’t think I need to describe the room much, but it had hot water, clean towels, clean sheets on a comfy bed, and it was all mine.