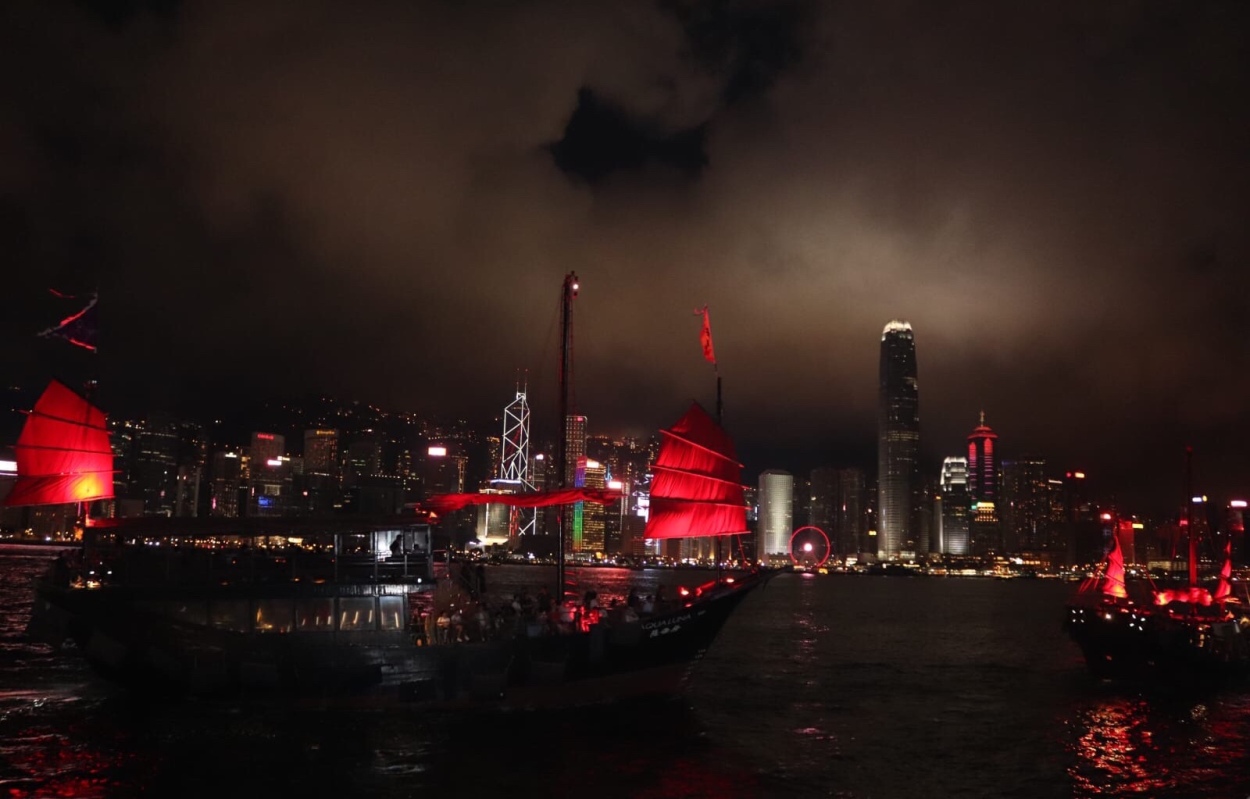 After my problems on Lamma Island (Ferry Day 4) I took an executive decision to have Saturday off. Susie has Sundays and Mondays free each week, and we had plans for those days, so the result has been a slightly blog-free couple of days.

Here’s a quick-ish summary of our land-lubber’s weekend.

Susie’s last day of examining meant that I took myself off to the Hong Kong Museum of History, conveniently on our doorstep here in East Tsim Sha Tsui. It’s a vast museum, with numbered sections, from 1 (The Natural Enviroment) right through to 8 (the glorious future once assimilated back into mainland China. This section is entirely in bold red). I don’t mean to overly-politicise the place, because it really is fantastic. The section on culture is fascinating, and includes an exhibit about the Great Bun Mountains of Cheung Chau Island (a place I hope to be visiting soon). They were produced for the Bun Festival as a food offering to the Gods, and at midnight on the last day people would scramble up them to grab a bun for good luck, until and accident in 1978 when the tower collapsed and many were injured. There followed nearly thirty bun-less years until 2005 when they built a metal tower instead, and the scramble resumed. Except the buns were now “simulated”, and made of plastic. (For scale, each bun in the picture is about the size of a large grapefruit, and there are 6,000 of them) For lunch I visited their cafe, which had a choice of retro dining areas, either fifties-style Formica booths or wooden ones from the turn of the century. I chose the latter for my Won Ton noodle soup and Pak Choi with jasmine tea (sadly, no buns on the menu). As often said in these pages, there’s nothing quite like having lunch in a booth to set things right. 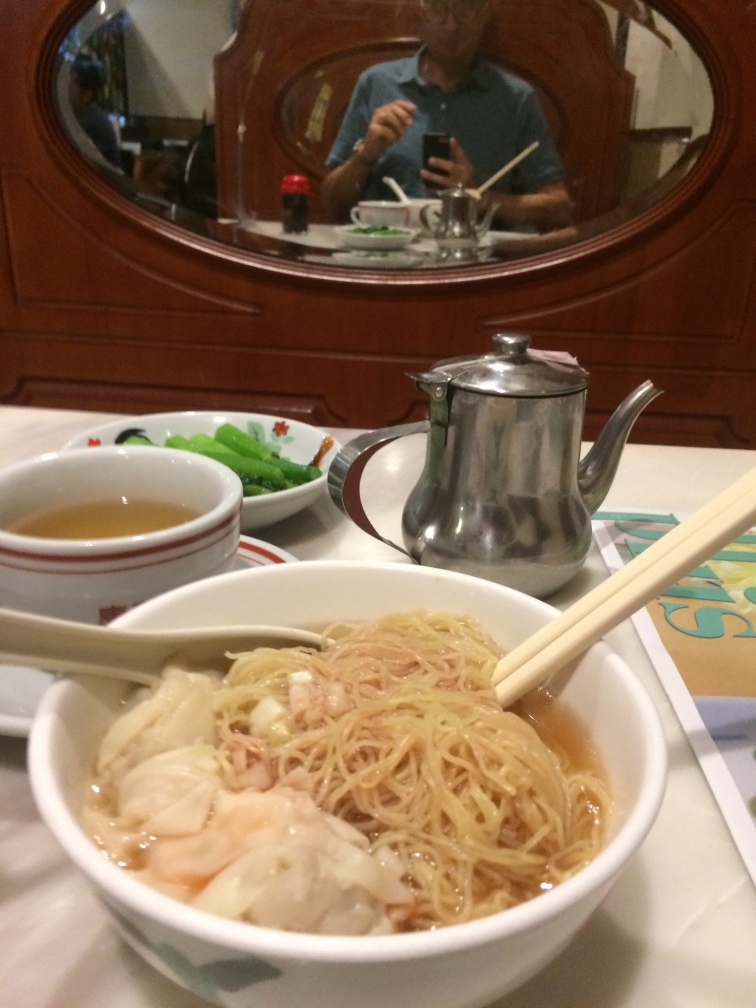 After a bit of fridge-magnet shopping in the gift shop…

…I went back to meet Susie, who was ready to celebrate the end of her first week of examining with a Gin-ger & Tonic. It’s been a very intense experience for her, with many different issues to cope with including having a translator in many exams, so she was ready for a break. The ABRSM threw a nice drinks party in the hotel (they call it a Paper Party because you have to hand in the paper mark forms from your week’s work) and then we popped out for a quick supper.

We had a hotel breakfast together (we’ve resolved to mark the weekends like this), then went to the gym a bit later where I got a touch carried away because of listening to some very up-tempo and funky music. I’ve never had such a high average speed on a cycling machine.

We’d arranged to meet up For lunch in Admiralty, which is on HK Island, with my cousin Robert. He’s lived here for over five years now, working on new projects for HSBC, proud owners of one of the finest buildings in town, designed by Norman Foster. Finished in 1985, it was the most expensive building in the world at the time and still looks absolutely cutting-edge-modern. Whenever the subject of buildings in HK comes up, the subject of feng shui is never far behind, and I’m told that this building has very healthy feng shui. At some point I may try and do a bit on this for the blog. 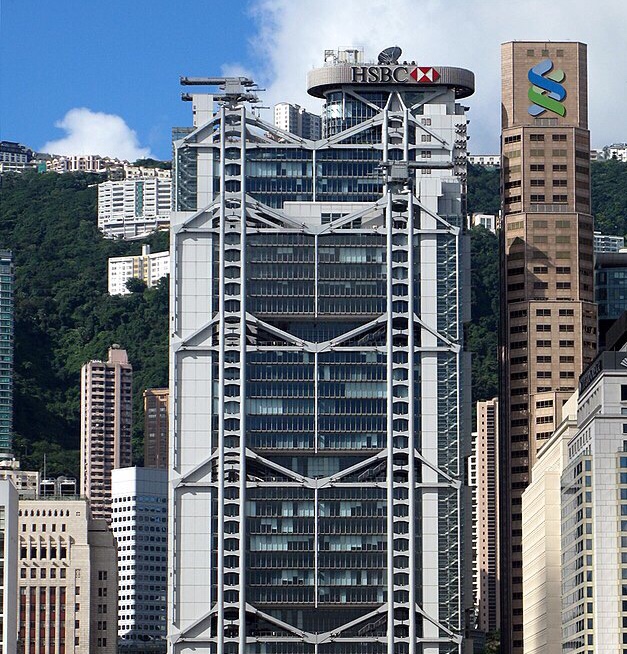 Robert clearly loves being in the city, and showed us round with an enthusiast’s eye for detail. We caught up on family news over a dim sum lunch in the Lippo Building at Chiuchow restaurant (featuring some superb thinly sliced duck served on a bed of sharp apple) then posed for a group selfie outside his office, complete with one of the two famous lions preserved from the original building on this site which bear bullet marks from the Battle for Hong Kong in 1941 (the other lion looks less aggressive, and they are supposed to reflect the temperaments of the two original managers of the bank, Stephen and Stitt). 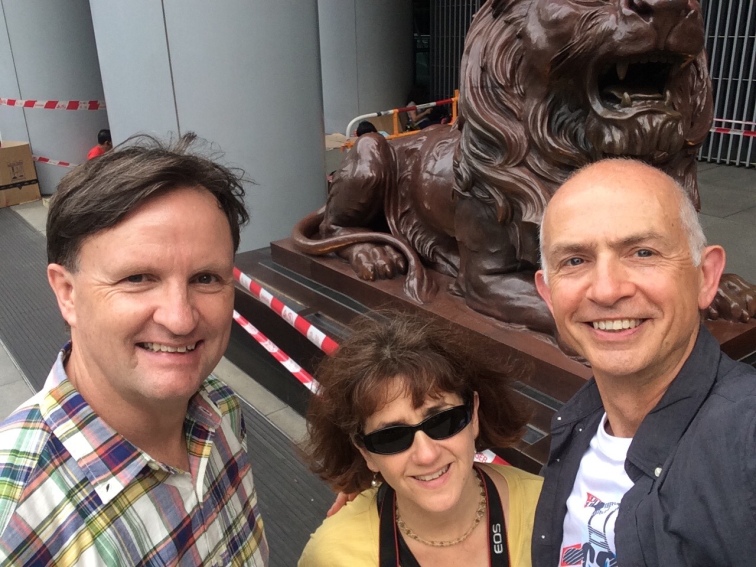 After a tour of the wonderful new Tai Kwun Centre for Heritage and Art together, we parted at Central Station with plans to meet up again later in this trip. Thanks to Robert’s fascinating walking route, I also finally managed to find a small Hong Kong flag for my bike, but had a good-natured fight over it with three young travellers from Venice. Luckily, the stall owner had many more tucked away.

The MTR ride home at around 6pm showed us more clearly than any news report could just how many people are getting involved in the Pro-Democracy protests every weekend evening. The atmosphere changes as dusk falls, groups of black-clad young people materialise almost out of nowhere, and you find yourself wanting to hurry home, just in case you have the misfortune to find yourself in the middle of something. So far, we awake each morning to the same apparent calm, but with a newspaper front page of riot and unrest whilst we slept. Thank you to all those who have passed on their concerns about our safety, we’re very grateful to you. We’re being very circumspect, and follow the advice we’re given. Tomorrow morning I’m going to be cycling my usual route which goes past a monument that was the centre of the action last night, and will inspect the damage.

We were determined to finally see the 8pm skyscraper light show Symphony of Lights from the waterfront on Kowloon, and it didn’t disappoint. (Photos courtesy of Susie’s new proper camera) 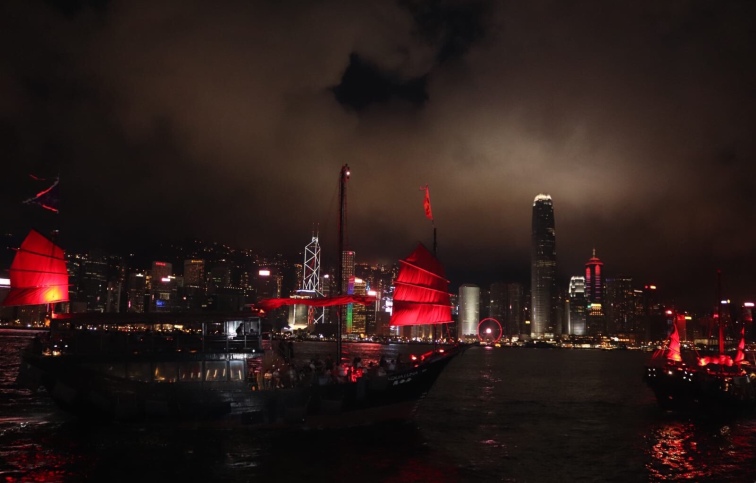 A day of leisure, with a return to the Museum of History with Susie. We’d planned a trip out to see Lamma Island, and the chance to pay off a certain HK$40 debt of mine, but Susie had various work chores to finish and understandably felt like a more laid-back day, so that will have to wait for now. We did also try to visit the Hong Kong Museum of Art – closed for renovations until November.

See you back at the waterfront tomorrow, when Pier No.5 will reveal where I’ll be spending Ferry Day No.5, hopefully in your company. I hope everyone is having a wonderful August out there!

3 thoughts on “A Weekend Ashore in Hong Kong” 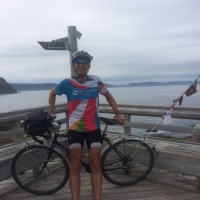