Ferry Day 5 – Things were a little compllicated this morning due to problems at several MTR stations, so it was felt that all of the examiners should travel by taxi. As I cycled down to the Kowloon Star Ferry I could see the effect it had already had on traffic, and kept my fingers crossed that Susie and her colleagues managed to get to their examination studios without too many unwelcome Incidents of Travel.

So here I am back at the Hong Kong Ferry Challenge, raring to go once more with a brand new wallet and Octopus card, and determined to hang on to them both.

Something has struck me about these Central Ferry Piers that I go to every day. Although they’re all part of the same lump of land sticking into the sea, and are all roughly the same dimensions and numbered in sequence as if they were a set, each Pier has a very different character. The thing is, it seems that the character reflects the character of the Island that the Pier serves. So No.3, for example, which serves Discovery Bay with its large numbers of expats, pilots (as I discovered!) and such living there, is a very cosmopolitan pier, quite smart and with an excellent coffee shop. Meanwhile down at Pier No.4, which serves the more rural and low-rise Lamma, the ambience is distinctly less international in character, with a snack bar I love called Java Java that sells the fish dumplings. At Pier No.5 today, I noticed that there was hardly a word in English at the various food stalls, making me feel as though this journey will take me a little further off the beaten track.

As I write this I’m sitting in a lovely cool breeze on the freight deck of my ‘Ordinary’ ferry (no bikes on the ‘Fast’ ones, please) to Cheung Chau. The sides are completely open down here, and I’m in the company of fridges, large plastic-wrapped bundles of cargo, and a handful of very relaxed and friendly locals. I was allowed to board early with my bike, which is only right and proper, and decided not to claim my air conditioned seat upstairs, but to lend my bike a bit of moral support down in steerage. The wide-open views make it really worth it, if you don’t mind the occasional wafts of diesel fumes. We leave in five minutes…owwww! I do hate it when they blow the disembarkation whistle right beside you. 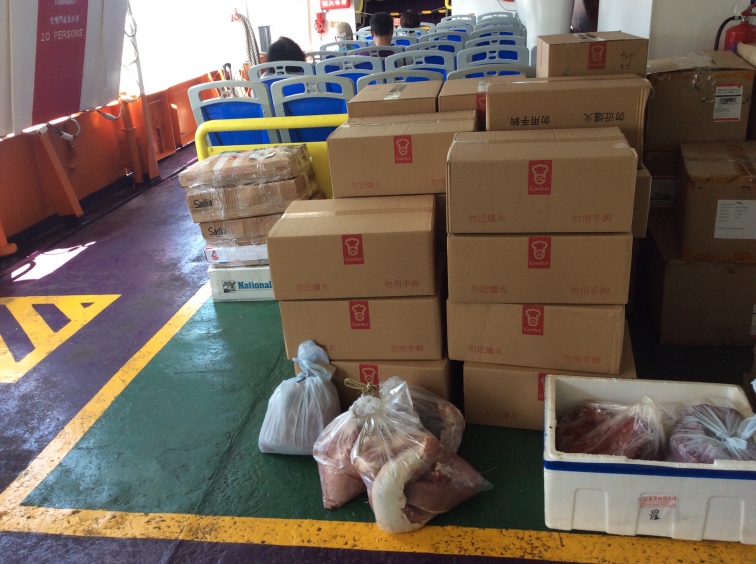 Cheung Chau literally means “Long Island”, but has a Chinese nickname, Dumbell Island, due to its odd shape. On the subject of island names, I discovered something interesting about Lamma Island’s name at the HK Museum of History. When the British were making maps of the region in the 1800s, they were using older Portuguese maps as reference. When they saw ‘Lama’, next to the island, they naturally assumed that it was its name and wrote it in. It turned out, however, that ‘lama’ was a warning for ships in the narrow channel, and meant ‘mud’. Perhaps to cover their embarrassment, the British surreptitiously added another M, and Lamma was christened.

The best thing about arriving on Cheung Chau by bike is the site that greets you at the end of the pier – this is a BIKE island! 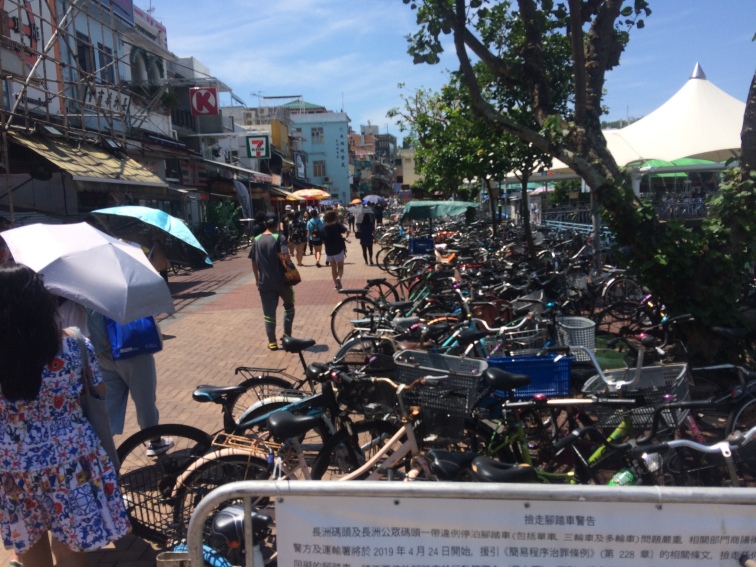 The middle of the dumbell-shaped island is so thin that if you get off the ferry too quickly as it docks on the west side, you’re in danger of walking straight back into the sea on the other side

All day on the island I couldn’t help but notice the smell of burning paper in the air, and also the small metal dishes outside people’s houses where I kept seeing brightly coloured paper bank notes burning. These are called ‘Joss Paper’, and are an offering to deceased relatives, making sure they’ll have all they need in the afterlife. Thursday is a religious festival called ‘Hungry Ghost Day’, and I wondered if this was connected to that day. Outside the Tin Hau temple at the end of the promenade (it’s now the first place I look, whichever the island) there was a huge fire blazing inside one of the brick temple buildings built for this purpose. A woman was tending it, and gave me a very sweet and cheery greeting as I parked the bike in a welcome bit of shade by a superb tree:

For a few minutes I watched black ashes float over the trees, across the beach and out to sea, then I visited the temple itself. Three people, who I think worked there, were tidying up a bit and then gathering up large bundles of joss sticks together in thick handfuls, which they lit carefully at the temple lantern. The flames brightened up the dark interior of the temple with a surprising intensity, but they waved them quickly through the air above their heads and the joss sticks went out, replacing the bright light with a thick, heady, scented smoke that encircled me as they wafted past, attending to their duties. I’ve decided to pay off my debt bit by bit whenever I visit a Tin Hau temple, just in case I don’t get to make the return trip to Lamma, so I tried to put a note in the donations box but it was so full my note kept falling out. The older man laughed at my struggles, then grabbed a long, thin stick, wide at one end, and used it to deftly poke down the notes in the box before gesturing for me to try again. He nodded with satisfaction when my note stayed in. I lit just one joss stick outside and called out goodbye, to which they all responded with great big smiles and cries of “bai-bai” ( which really is bye-bye in Cantonese).

Heading back through the town I kept seeing miniature vehicles, like the ‘trucks’ I mentioned on Lamma. Here there were tiny white buggies for ambulances, which reminded me of the buggies in 1960s tv show ‘The Prisoner’. The Fire Engines were similar, the smallest van you could imagine. No cars allowed, but bikes everywhere! My first place to explore was called “Reclining Rock”, but I had a little difficulty really committing myself to deciding when I was there. I first saw this one, and thought “Yes! That’s precisely like a person reclining, and there’s even a rock pillow, in the traditional Chinese style!

Then a bit further along the high path which gripped the coastline, I found this, the actual famous rock. Honestly, I do prefer mine. I followed the beautiful Family Walk route heading to the southern end of the island as best I could, but as on the other islands you have to be ready for some very steep sections. I had to push the bike for quite a long climb with my bike computer flashing away at me that we were on a 23% gradient. Once you properly heat up in this climate, I’m afraid only clichés will do. The sweat poured off. How’s that? Got the image? Good.

I looked in at one beach where a lone fisher woman was sitting on the sand, legs stretched out straight in front of her, getting her gear ready – I watched groups of people throughout the day sitting in the shallow water around rocks, apparently looking for tasty morsels for their pots. I decided to grab some food myself, and made my way back to the village where the ferry docks. Down a busy side street I found something that was firmly on my to-do list – a Cheung Chau bun shop, selling the same buns as those seen on those Bun Mountains in the museum. I’ve only just noticed that it also says “No Climbing” underneath! I chose black bean past, and it was absolutely delicious. Warm, fluffy and more-ish.

Having studied the map a bit I decided to go for it and try to reach a very isolated and inaccessible but supposedly beautiful beach which had cropped up on a few “Best Beaches” lists, called Tung Wan Tsai. The map showed a broken line in the path to get there, which always means ‘stairs’, and they weren’t joking. I checked the path out on foot, saw the extent of the problem, and returned to lock up my bike. I walked down with a great view of the bay, a few misgivings about making the return journey, and carrying all my gear, getting more and more desperate to jump in the sea as soon as possible.

It was a stunning bay, deserted and with a tiny patch of shade, thank goodness. Using the very last bit of memory on my iPad, I even got an unfinished video clip:

I’m afraid I now need another cliché – climbing back up the hill, I was boiling hot. I think that conjours it up really well. Back at the narrow bit of the island once more I had one last swim at Tung Wan Beach, used the public showers to get all the sea water and sand off, then got myself aboard the ferry home, feeling absolutely exhausted but very content.

The skies above Hong Kong Island were filled with dense black cloud, so I put on a last turn of speed cycling between ferries and made it back to the Intercontinental Hotel with the sun still shining on Tsim Sha Tsui.

A couple of things that caught my eye today: 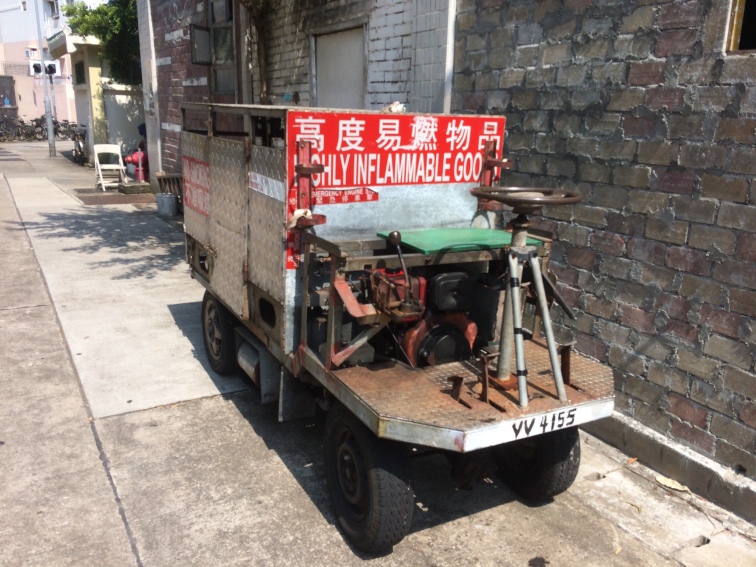 Next is this venerable Rusty Old Bike, spotted on Mody Rd near our hotel. I’m so glad I went to the museum of history yesterday, or I might not have recognised the very folding bicycle used by the Governor of Hong Kong in 1841 during the First Opium War. I suppose he must have left it padlocked to this railing and then forgotten the combination. We’ve all done it.