Today I travelled up the wide valley that leads from Delta, B.C., all the way into the mountains, but stopped well before that! A hotel in Chilliwack was the goal today, and the pleasure of being able to cycle with my host, Stewart, which really made my day. He couldn’t come all the way with me because apparently he seems to have a life of his own to lead. Fair enough Stewart.

After another wonderful breakfast with G&S (proper Scots porridge, eggs and bacon, toast, coffee) Stewart and I packed up to leave whilst Gill kindly put together a bundle of trail mix and bananas, and we were being watched all the while by this Bald Eagle high in their pine tree, one of the last trees of its kind in the area. The eagles seem to love it, sometimes gathering in Hitchcock-esque clusters.

Then we rode east for a couple of hours together, out of the city and into the lovely wide-open fields of Delta and beyond, with many bird-sightings. I think we’ll make this today’s What Is It, Sam?, even though Stewart already nailed it. Anyone else? First of the year, he said.

It was great to cycle and chat about our lives as we merrily rolled along, something I haven’t done much of lately. Very much in the spirit of yesterday’s huge tree photos, here are a few pics of someone’s neat little vegetable plot we spotted en route. Nothing of note there, you’re thinking. 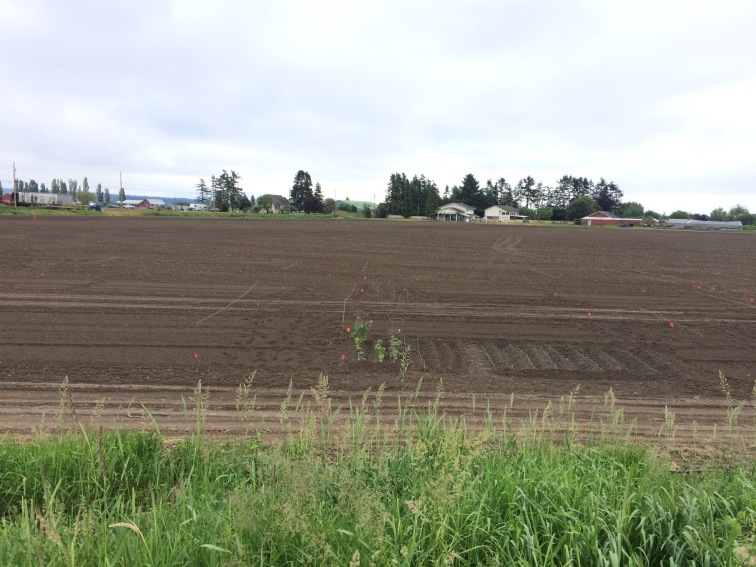 You’ve got to be kidding!

Finally we got to main highway, with its designated cycle lane (aka the hard shoulder), which was where Stewart had to leave. He has a limited edition “No Lorries” bike helmet, much coveted at boutique cycle shops around the globe. I have an older “Antenna” model.

Then I was off, down a long stretch of highway (photo credit S Buchanan) before earning the right to peel off onto a long sequence of attractive residential streets. I think it was Langley. It wasn’t dramatic scenery but it was pleasant, peaceful and mostly flat! A few hills took me by surprise as usual though. I was in the hands of my computer’s GPS, but basically I’m just heading east, and it found loads of really nice ways to avoid the worst of the highways. There was the occasional price to pay, of which more later.

As the day went on, the weather really warmed up, and I found myself thinking again about Cormac McCarthy. At supper last night we were discussing him and his eccentric style and lack of punctuation, particularly speechmarks. Also his habit of not identifying the talkers in a conversation, so you often have to re-read the passage going “him, her, him, it’s Her!” He likes chucking loads of Spanish in too, and pretty esoteric vocabulary about horses and lassos and whatnot. I recalled reading how, in the heat of the desert in New Mexico, or the Trans-Canada Highway for example, nothing feels more refreshing than soaking your bandana in cool water, tying it dripping wet onto your head, pulling down your Stetson (bike helmet) and getting back in the saddle. Miles of bliss will follow as you coral your cattle.. (That’s enough. Ed). It keeps the sun off too.

Obeying my sat-nav, I followed a (hard work) loose-gravel cycle path along a dyke with great views of the river for what looked and felt like a very long way, only to find that where it dipped under a bridge right at the end it was completely under water. No choice but trundle all the way back, getting covered in dust, and try another way. These things always seem to happen towards the end of the journey. 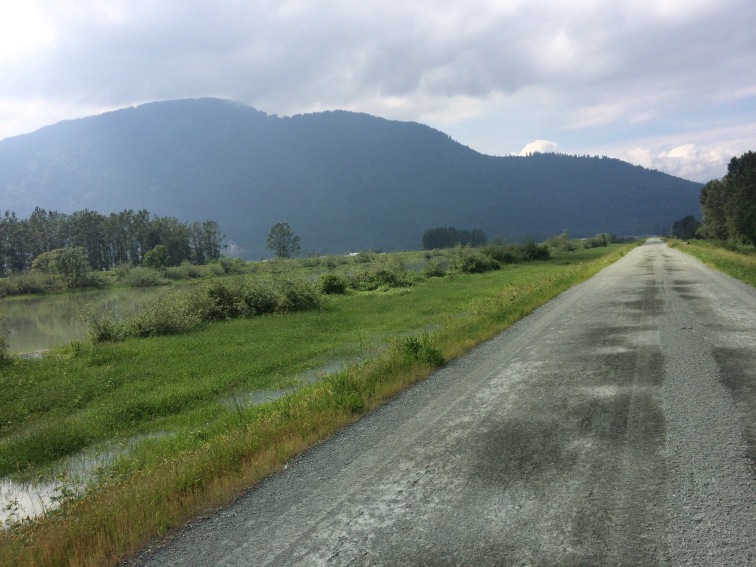 Looming in the background all day were the mountains I’ll be entering on Friday. I was getting very hungry and hot by now, and found my mind drifting back to a certain fruit pie from last night (thanks Gill!)

When I finally arrived at my very nice hotel, the Comfort Inn Chilliwack, I was greeted by the most friendly, positive and encouraging welcome I could possibly ask for from Hannah at the desk, and then Paul, the owner. They were also full of suggestions about the area too, so hopefully I’ll be able to follow one or two up, particularly as regards EATING!

Hannah was very interested to know more about my charity, SOS Children’s Villages, and said she’d sponsor me right away. She said it, she did it, done! By the time I got to my room my phone did its coin-rattle and I just knew it was her. Thanks so much Hannah.

Today’s One Thing I Got Rid Of: my old gig bag, a Nike backpack, no longer worth carrying with me. After many years of concerts, probably a thousand or so, it’s heading for the bin. Thank you Gill. And thank you gig bag.

On a thin day for signage, here’s the Sign That Is Funny for today: 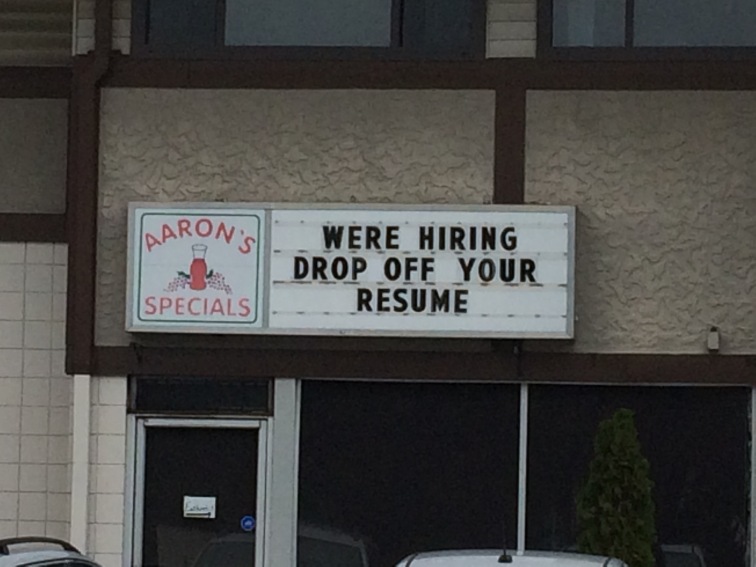 “…and bring an apostrophe or a time machine.”

The final task of the day was to order a big chicken & bacon salad and a pint in the restaurant opposite and write this very blog! Cheers to you all!

Today’s Song Stuck In Head Whilst Cycling was: A Horse With No Name. So many la la las!! So very Cormac.

15 thoughts on “Day 3 – Tswassen to Chilliwack”